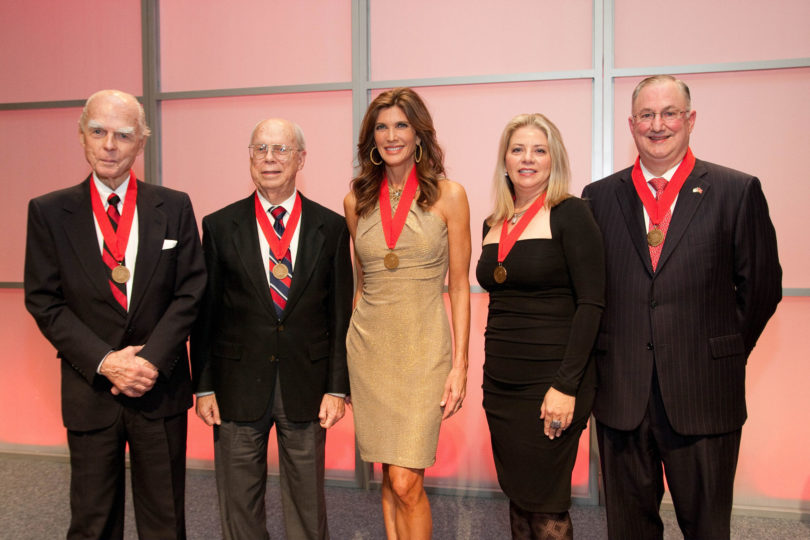 Athens, Ga. – Ten distinguished communicators were inducted into the University of Georgia Grady College of Journalism and Mass Communication’s Fellowship during a tribute ceremony Nov. 17 in Mahler Auditorium of the UGA Center for Continuing Education Conference Center and Hotel.

The Grady Fellowship was created in 2008 to recognize individuals whose lives and careers lend measurably to the reputation Grady College enjoys. Its newest Fellows were selected for their influence, achievements and service to the media professions.

Clark served as co-host of the evening along with Swann Seiler (ABJ ’78) and Chris Jones (ABJ ’73), the outgoing and incoming chairs of the Grady Board of Trust, the college’s advisory board. More than 250 friends of the college attended the tribute event, which saluted its global reach.

Lee Becker, director of Grady’s James Cox Center for International Mass Communication Training and Research, provided an overview of the center’s global outreach. Five Grady students spoke about their experiences with the college’s study abroad programs, which include the Cannes Film Festival, Travel Writing in Cambodia and the Cannes Lions Advertising Festival.

Jennifer Sloan (ABJ ’86) of Toronto, Canada, represented Grady’s international alumni. The college currently has graduates who work in 48 countries. Sloan is past president of the college’s alumni board.

Photos from the tribute reception and awards ceremony can be viewed on Grady College’s Flickr page at www.flickr.com/photos/ugagrady/collections/.

2011 Grady Fellows
Adelman (ABJ ’86) serves as U.S. ambassador to Singapore. He was a Georgia state senator from 2002 to 2010 and an assistant attorney general. For the past 20 years, he has worked with the national law firm Sutherland Asbill and Brennan LLP. During the 2005 session, Adelman authored and passed legislation cracking down on cyber predators, improving safety on public transit and creating a “Share the Road” license tag with proceeds to fund cycling programs. In the 2009 session, Adelman introduced bills that would reform Georgia’s ethics in government laws and require electric power companies to invest in renewable energy. He has taught political science classes for the UGA Honors Program and in 2010, he was the keynote speaker at UGA’s undergraduate and graduate summer commencement ceremony.

Conrad Fink is a beloved professor of journalism and Morris Chair of Newspaper Strategy and Management in the Grady College. He also directs the Cox Institute for Newspaper Management Studies. Fink began teaching at UGA in 1983 and has helped start such courses as media ethics, sports writing, business reporting and introduction to print journalism. For 21 years, he worked with the Associated Press as a reporter, editor, foreign correspondent and vice president. He has also served as executive director of the AP-Dow Jones Economic Report and a visiting lecturer at the prestigious Poynter Institute. In addition to winning numerous teaching awards, Fink has written a host of books including Strategic Newspaper Management; Media Ethics; In the Newsroom and Beyond; Inside the Media; Introduction to Professional Newswriting; and Sports Writing: The Lively Game.

Julie Moran (ABJ ’84) began her network television career as a sportscaster, landing her first reporting job in Los Angeles for ESPN’s “Sports Focus.” After a stint co-hosting “Movie Time,” the channel that evolved into E! Entertainment Television, she moved to New York to co-host NBC Sports’ “NBA Inside Stuff.” A year later, she went to work for ABC Sports as the first female host of the highly rated “Wide World of Sports” following legendary sportscasters Jim McKay and Frank Gifford. In 1994, Moran became substitute anchor, weekend anchor and senior correspondent for “Entertainment Tonight,” a position she held until 2001. She then hosted “The Insider’s List with Julie Moran” on the Fine Living Network. In January 2012, she will co-host Lifetime’s morning show “The Balancing Act.”

Arnold Punaro (MA ’76) is a retired U.S. Marine Corps major general and chief executive officer of the Punaro Group LLC, a Washington-based firm offering a variety of strategic planning and analysis services, communications, crisis management, government relations and sensitive operations consulting. From 1997 to 2010, Punaro was executive vice president at Science Applications International Corporation. Punaro served as a member of Secretary of Defense Robert Gates’ Defense Business Board and as a senior associate at the Center for Strategic and International Studies in Washington, D.C. In January 2005, he was named to chair the independent Commission on the National Guard and Reserves. Punaro is the recipient of numerous recognitions, with more than 20 military awards and decorations. In March 2009, he received the Secretary of Defense Medal for Exceptional Public Service.

In the early 1950s, Bill Simpson (ABJ ’50) served as sports director for radio station WRFC in Athens and then became the public relations representative for Citizens & Southern National and Affiliate Banks of Georgia. In 1955, he served as national advertising manager of the Atlanta Paper Company (later named Mead Packing and Mead Containers). A year later, he became director of public relations for UGA, a position he held for 14 years. At UGA, he initiated programs and concepts such as electronic media programming, coordinated publications programs and special alumni programs, including record-setting fundraising projects. Since 1970, he has owned Simpson Associates Public Relations and Advertising in Athens, providing professional services ranging from market research to media campaigns.

Julie Winskie (ABJ ’84) has been an integral member of the Porter Novelli public relations team for more than 20 years, formerly running its New York office and heading the company’s consumer marketing practice globally. Today she serves as global president of clients. Drawing from her deep expertise in brand building, public relations and the development of influencer programs, she has worked with a range of companies in consumer goods and services, technology and health care industries. Her client experience includes work for DuPont, Mercedes-Benz, P&G, Timberland, Gillette and HP. Winskie is a founding member of Omnicom’s G23 consultancy of female executive leaders, a founding advisory member of Brand 50, Global 50 and a participant in Fortune’s Most Powerful Women Summit. A member of the inaugural PR jury for the 2009 Clio Awards, she was also a jurist for the 2010 Cannes Lions PR Awards.

Jesse Outlar (ABJ ’43) was a popular sports writer who served as sports editor of The Red and Black and later became editor of The Camp-Lejeune Globe. In 1945, he served as sports editor for the Waycross Journal-Herald before joining The Atlanta Constitution. He remained with the Constitution for 41 years, serving the last 30 as sports editor and sports columnist. He covered the Kentucky Derby, the World Series, the Super Bowl, the Masters, world-class boxing, Henry Aaron’s record-breaking homerun and anything sports about his beloved Georgia Bulldogs. Outlar won numerous awards throughout his career. He was named Georgia Sportswriter of the Year three times by the National Sportswriters and Sportscasters Association and was voted as Georgia’s Sports Columnist of the Year four times by the Associated Press. In 1991, Outlar was inducted into the Georgia Sports Hall of Fame.

Lamar Trotti (ABJ ’21) was an American screenwriter, producer and motion picture executive who became the first graduate of the Henry W. Grady School of Journalism and Mass Communication in 1921. While at UGA, he served as editor of The Red and Black. He became an executive at Fox Film Corporation in 1933 (which later became 20th Century Fox) where he wrote some 50 films for the studio, many that he produced. In 1944, he won an Academy Award for “Wilson” and was also nominated for “Young Mr. Lincoln” (1939) and “There’s No Business Like Show Business” (1952). One of the most famous films Trotti wrote and produced was “I’d Climb the Highest Mountain” (1951), which was filmed in north Georgia and starred Susan Hayward.

Grady County native Robert VanLandingham (ABJ ’42) joined the U.S. Coast Guard after graduating from Grady College. He served in the southwest Pacific. After a stint as a principal and seventh grade teacher, the Phi Beta Kappa graduate joined his family in operation of R.R. VanLandingham Inc., the local dealership for Pontiac cars, International trucks and Farmall tractors. After the dealership closed in 1982, he returned to his first love, journalism, and became staff writer for The Cairo Messenger and mentor for all associated with it. He retired in 2002. The civic and community leader also served as a Cairo city councilman for 16 years, was a member of the Grady County Board of Education for 14 years and served as a member and chairman of the Grady County Hospital Authority for 20 years.