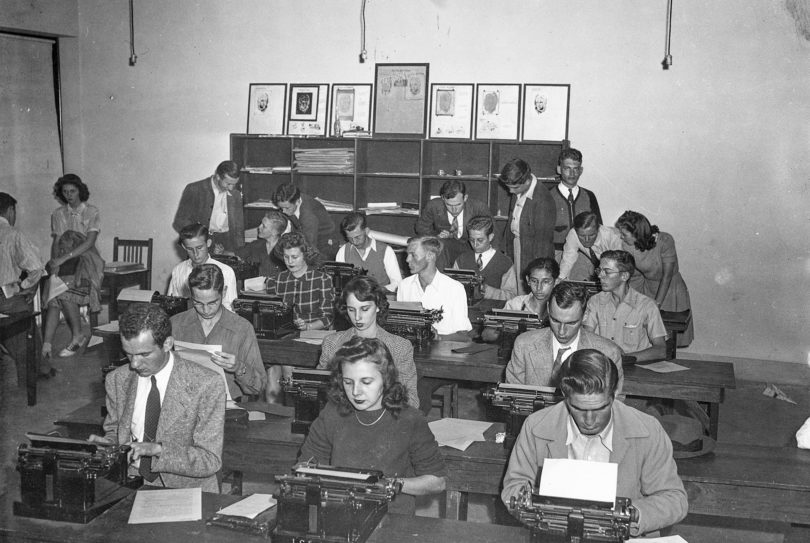 A journalism newsroom circa 1940. The Grady College of Journalism and Mass Communication is celebrating its 100th anniversary this year.

Before he godfathered the Southeastern Conference, before he built a stadium that would bear his name, and before he became the principal architect of the University System of Georgia, Steadman Vincent Sanford inaugurated journalism education at UGA. Sanford taught the university’s first course in journalism and by 1915 he won trustee approval to make it a school. One hundred years later Grady College celebrates its lustrous history and promising future.

In 1921, the school was named for Henry W. Grady, the New South’s chief journalist and publicist, whose death in 1889 was the occasion for national mourning. That year also saw the school’s first graduate, Lamar Jefferson Trotti, who went on to write and direct more than 20 major motion pictures. Trotti’s career affirmed Sanford’s belief that journalism was a literary genre that would attract more students to literature and critical thinking.

Grady’s second graduate in 1922 would become its legendary dean, John Eldridge Drewry. As director and dean from 1932 to 1969, he developed Grady’s national reputation. He launched institutes for newspapers, broadcasters, advertisers and public relations professionals, and Grady soon became home to all their Halls of Fame. The ’30s also inaugurated student honor societies, a scholastic press association and one for intercollegiate editors.

In 1939, Drewry took a now-famous call from Lambdin Kay, general manager of WSB-Radio. Having been spurned by Columbia’s Pulitzer Board, Kay asked whether Grady might sponsor awards for the National Broadcasters Association. By 1940 the regents approved the George Foster Peabody Awards, named for the Georgia native and UGA’s principal benefactor. Its first presentations were made in New York in 1941, and it remains the oldest and most prestigious award in electronic media. The Peabody Archives in the Richard B. Russell BuildingSpecial Collections Libraries is the third largest media collection in the world.

World War II caused a dramatic decline in enrollments with women assuming leadership roles. Margaret Childs became the first female editor of the Red & Black. Grady always attracted female students with 20 of its 61 graduates in the 1920s being women.

Grady faculty and students were front and center in the American awakening that followed World War II. In 1953 four Red & Black editors resigned rather than knuckle under to demands of an arch-segregationist regent, and in 1961 Charlayne Hunter-Gault broke the segregation barrier and chose journalism as her major. She was befriended by Tom Johnson, also a Gradyite and Red & Black editor. Both went on to spectacular, award-winning careers and both have maintained close ties to the college.

When Drewry retired in 1969, the college had just opened its current academic home following years in the Commerce and Journalism Building.

By the ’80s a new norm had settled in. The faculty had matured into its research emphasis, a Ph.D. program was added in 1983, and with a full complement of degree programs the school became the Henry W. Grady “College” of Journalism and Mass Communication in 1988.

Today, Grady College has 15 named and endowed professorships and chairs. With centers and institutes for everything from international research and outreach to management studies to health and risk communication, the college’s reputation is impressive with an open horizon of opportunities that await the college and its students in the next century.

Like the partners with whom the college collaborates, Grady must transition to a digital-first footing while never losing sight of the principles of fairness, accuracy and truth telling, clear and concise written expression and the ethical moorings of these professions.

To this end, Grady has completed a massive restructuring, merging the newsgathering faculty in a single journalism department and replacing the telecommunications department with the newly created entertainment and media studies department. As the venerable college prepares to launch its new journalism curriculum, students look toward a digital-first, multiplatform program that offers a rich mix of the skill sets needed to work in the newsrooms of tomorrow. Grady’s entertainment and media studies program combines the latest digital storytelling techniques, interactivity and gaming to capitalize on the momentum surrounding transmedia and the fast-growing film industry in Georgia.

The department of advertising and public relations maintains its leadership status, preparing students for exciting careers in the era of digital social media.