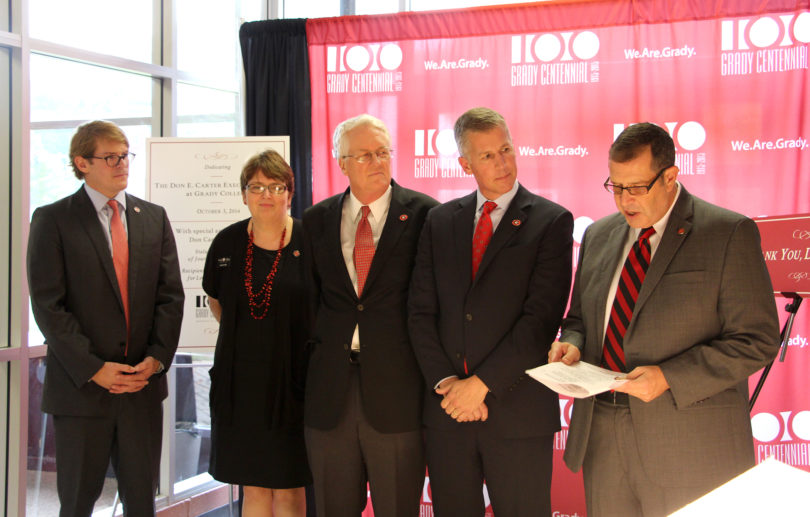 Athens, Ga. – Don E. Carter has been awarded the Dean’s Medal for Leadership Excellence by the University of Georgia Grady College of Journalism and Mass Communication.

Charles Davis, dean of Grady College, made the announcement last month during the launch of the Grady College Centennial Celebration at a public concert by Freedom Sings before an audience of more than 500 people.

The Dean’s Medal, the college’s highest honor, was awarded to Carter in tribute of his career of leadership in journalism, including long-time support for journalism education at the Grady College.

“Don Carter is a stalwart of journalism excellence and an extraordinary alumnus,” Davis said. “We are honored to present the Dean’s Medal, expressing our respect and appreciation for Don Carter’s distinguished career as a journalist and news executive and his decades-long support for Grady College.”

Don Carter, former vice president of Knight Ridder and past president of the Grady College alumni board, recently made an additional cash gift and bequest to endow the mission of excellence of the journalism program at the Grady College. The Carter gift provides the college’s first endowment of a departmental mission.

“The University of Georgia congratulates Don Carter on receiving the Dean’s Medal and deeply appreciates Mr. Carter’s commitment to journalism, the bedrock discipline on which Grady College was founded in 1915,” said UGA President Jere W. Morehead. “Journalism is essential to informed public discourse in our democracy and in our university. Mr. Carter’s gifts imbue journalism education at Grady with the Carter stamp of excellence and make the University of Georgia an even greater university.”

Speaking from his home on Sea Island, Carter said he is “honored to be a graduate of the Grady College and its strong and dedicated college of journalism and mass communication.

“In 1936, I convinced my father that studying journalism at the University of Georgia was worth his investment of $500 a year to send me to Athens,” Carter said. “Journalism has provided me with a rewarding career as a journalist and news executive. I am pleased I can support students and faculty to preserve and advance journalism excellence in Grady’s next century.”

Janice Hume, professor and head of the college’s department of journalism, said the endowment is “a landmark provision for Grady that will benefit students, faculty and the journalism program forever.

“Complementing the work of the Carter Chair, Mr. Carter’s gift will allow the journalism program to reach new heights,” Hume said. “Immediately, it will be put to work to prepare students to enter prestigious journalism competitions. It will support students on internships in cities where the cost of living is high, and it will bring journalism leaders to campus in the Carters’ names. The gift will allow journalism students and faculty to participate in programs marking Grady’s Centennial. Funded by the Carter gift, a highlight of the Centennial weekend April 16-19 will be the inaugural Carter Symposium on sustaining strong journalism.”

Last month, the college also announced that the dean’s offices would be named for Carter, dedicating the Don E. Carter Executive Suite in a ceremony attended by the Grady College’s alumni board, faculty, students and guests.

Professor Kent Middleton, former head of the journalism department, who has served with Carter for many years on the Red & Black board of directors, said it will be inspiring to see Carter’s name permanently in the halls at the Grady College. “Each time I walk by,” Middleton said, “I will be reminded of Don’s advocacy for the basic values of excellent journalism: accuracy and fairness on issues of public importance.”