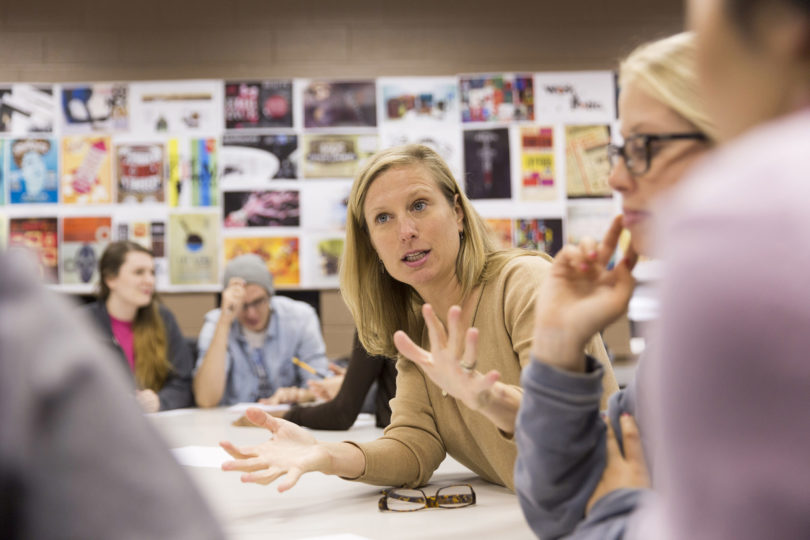 As 5-year-old Haden was entering the swimming portion of the Athens YWCO’s “Kids Tri the Y” youth triathlon two years ago, race director Kim Landrum noticed all the race’s adult helpers—or “swim angels”—already were with other children.

Not wanting Haden to feel pressured by the racers behind him and knowing from prior talks with his mother that the young racer would need some help, Landrum kicked off her running shoes, jumped in the water fully clothed and helped him swim the 50 yards to the next portion of the race.

Since then, Haden has had a special bond with Landrum, a lecturer in the Grady College of Journalism and Mass Communication. Haden also has gone on to compete in several other youth triathlons.

Children like Haden are the reason Landrum works with youth athletes and YWCO, one of the organizations supported by UGA’s Campaign for Charities, which ends Dec. 15. Landrum said she loves to see how the children tackle the race, which includes biking, swimming and running on a closed course, and push themselves during each leg.

“When you see 5-year-olds giving it everything they’ve got out on the bike course—gritting their teeth, but they do it and they don’t give up—then how can we as adults not learn something from them,” Landrum said. “They’re pretty special.”

Next year’s June 6 triathlon will be the fourth year the event has been held. The “Kids Tri the Y” started when the YWCO reached out to Landrum who already had been coaching youth athletes in Athens.

“I had never directed a race event, but I had been to enough events that we just figured it out,” Landrum said. “It’s one of those things where you just say ‘yes’ and you don’t worry about how you make it happen. You just have to have faith you’re going to make it happen.”

The race had 80 participants the first year. Last year it maxed out at 125 competitors, and next year the event will be able to safely accommodate 150 children.

“For the kids, it’s a great introduction to something they can do for the rest of their lives at any level, competitive or casual,” Landrum said. “If we can just send them away with this memory that they did something that they’ve never done before and they did it well, then they can carry that with them through life. It’s a great lesson on not quitting.”

For the lifelong athlete, all her hard work pays off when she sees those first racers run across the finish line.

“It’s such an amazing venue because near the finish line you’re surrounded by all the parents seeing their kids come in, and you see that everyone’s so proud,” Landrum said. “The great thing about this race is that because it’s so positive, the kids know it’s a celebration of them.”

Landrum said usually competitors who have finished will stay at the finish line to support the other children. Sometimes they’ll even run back on to the course to help another racer finish.

“It’s amazing to watch because the kids just sense that they’re supported and then they want to replicate that for each other,” she said. “It’s just a beautiful thing. I don’t ever get through race day without turning into a sobbing mess of happy tears.”