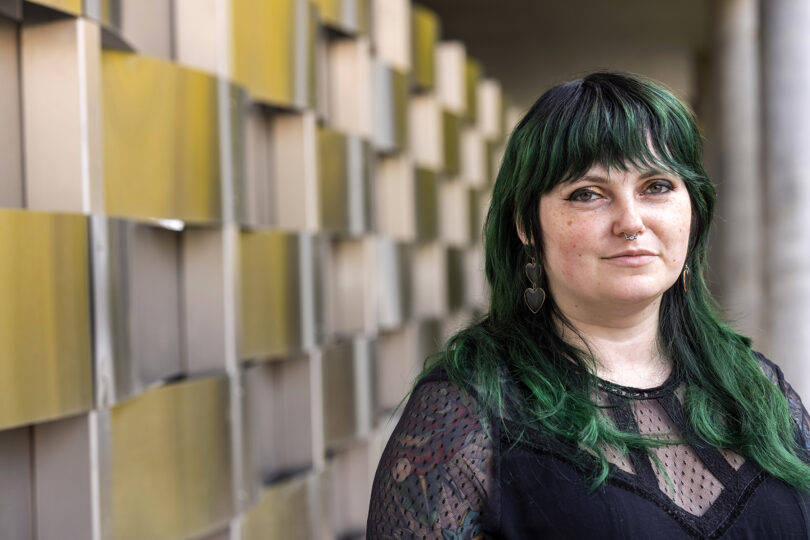 Noelle Shuck is a graphic designer at the Georgia Museum of Art. (Photo by Dorothy Kozlowski/UGA)

“It’s communicating something not just with words, but visually supporting a message,” she said.

Shuck’s love of visual art really took hold when she served as photo editor of Clarke Central High School’s newspaper. She intended to study photography in college but ended up studying graphic design and earning a Bachelor of Fine Arts degree from the Lamar Dodd School of Art.

During her time at UGA, Shuck took an internship with The Adsmith, an Athens marketing and design firm. That turned into part-time work and eventually led to a full-time position she held for eight years, eventually serving as art director.

“That’s where I cut my teeth,” she said. “It was high-octane and always busy. There were always 50 things to do that were different scopes, different tasks, different clients and different missions. I developed my skill set there.”

Ultimately, Shuck decided she wanted work with a narrower focus. She’d worked with the Georgia Museum of Art as a client during her time with The Adsmith, so when a position for a graphic designer opened up at the museum, Shuck jumped at the opportunity and joined its staff in January 2020.

“I absolutely adore it,” she said. “I love being here.” 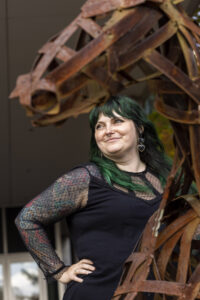 Noelle Shuck also makes time to pursue her artistic endeavors outside of work. She plays guitar and tours with the band Shehehe, which just put out its fourth full-length album, and often does cross-stitch. (Photo by Dorothy Kozlowski/UGA)

Print publications are Shuck’s favorite medium to design, and she takes the lead on the museum’s books, invitations and other printed materials.

“It’s always interesting to solve the puzzle of publication design,” she said. “I think we are, in essence, very visual creatures in a very verbal world.”

Shuck frequently creates catalogues to accompany the museum’s exhibitions. She’s particularly proud of the catalogue she designed to go with “Emma Amos: Color Odyssey,” which recently received Best in Show in Southeastern Museum Conference’s Publications Design Competition and a gold medal in the Books and Catalogues category.

In mid-2020, Shuck launched the redesign of Facet, the museum’s quarterly newsletter, which received a gold medal in the SEMC’s Magazines and Newsletters category.

“It’s all a lot of fun for me,” she said. “All of it is important. It’s about representing the museum in a way that is true to the mission to educate, preserve and exhibit art.”

Shuck shares that fun—and importance—with current UGA students, teaching one course per semester at the School of Art.

“I love teaching because I have an opportunity to tell my students what I wish I’d known when I was a student,” she said. “That’s been pretty rewarding.”

Additionally, she lends her artistic skills to local organizations and nonprofits, helping the community through design.

Shuck also makes time to pursue her artistic endeavors outside of work. She plays guitar and tours with the band Shehehe, which just put out its fourth full-length album, and often does cross-stitch. She considers herself a bowling enthusiast and owns more than 13 bowling balls.

Whether it is at work or at home, Shuck lives her life with flair.

“You just have to take a chance and try things, experiment, have fun, and have a sense of curiosity, wonder and exploration,” she said.