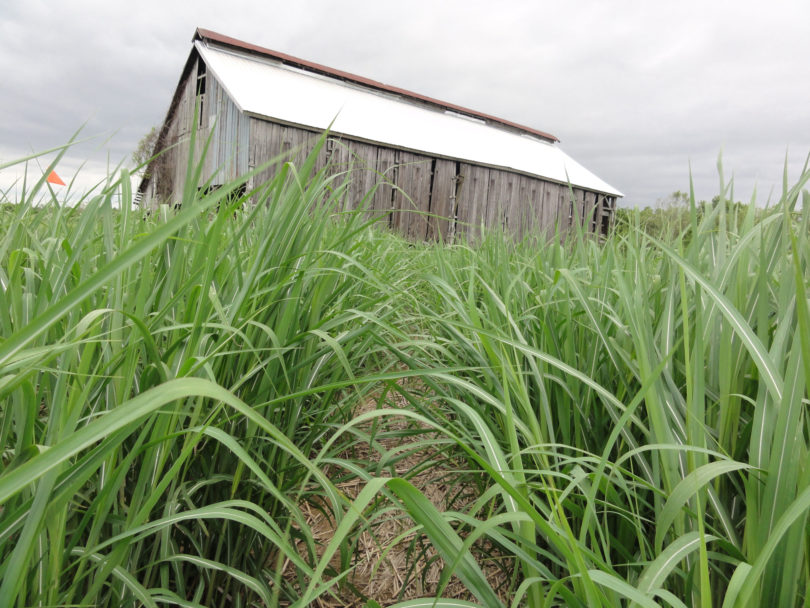 Miscanthus growing in a field. Photo Courtesy of Mendel Biotechnology.

Athens, Ga. ­- Researchers at the University of Georgia have taken a major step in the ongoing effort to find sources of cleaner, renewable energy by mapping the genomes of two originator cells of Miscanthus x giganteus, a large perennial grass with promise as a source of ethanol and bioenergy.

Changsoo Kim, a postdoctoral research associate in the UGA Plant Genome Mapping Laboratory, identified a set of approximately 600 bits of Miscanthus DNA that can serve as diagnostic tools. The next step is to determine which pieces of DNA are diagnostic of genes that can make the plant an even better biofuel crop.

Kim’s work-and the Plant Genome Mapping Laboratory-is led by Andrew Paterson, a Distinguished Research Professor who falls under the UGA departments of genetics and plant biology in the Franklin College of Arts and Sciences and crop and soil sciences in the College of Agricultural and Environmental Sciences.

“What we are doing right now is taking the same individual plants that were used in the genetic map and measuring their height, flowering time, the size of their stalks, the dimensions of their leaves and how far they have spread from where they were planted,” said Paterson, who is also a member of the Bioenergy Systems Research Institute. “And then one can use pretty straightforward statistics to look for correlations between bits of DNA and a trait.”

Miscanthus is a natural candidate for biomass farming. Its sugarcane-like stalks grow to more than 12 feet in height in soil of marginal quality; it requires very little fertilizer; it grows well in moist temperate climates across the United States, Europe and Asia; and in the eastern U.S. it can produce more biomass on less acreage than other candidate biofuel crops.

Miscanthus is also a cleaner source of energy than fossil fuels. When coal or oil is burned, it releases carbon that has been trapped under the earth’s crust into the atmosphere, which is a major cause of global climate change. Miscanthus removes carbon from the atmosphere as it grows. When it is burned, it releases only the carbon it collected, effectively making it carbon neutral.

Kim and Paterson’s work will allow breeders to build on Miscanthus’ natural strengths and remove some of its weaknesses. For example, a significant challenge to producing Miscanthus for biomass in the southeastern U.S. is that it tends to flower too soon. Flowering requires nutrients and energy that the plant would otherwise use to grow taller, thicker stalks and leaves.

“You don’t want it to flower,” Paterson said. “You’d like it to keep making leaves and stalks and not bother with reproduction. Nature tells it not to do that.”

The genetic map will allow Kim and Paterson to locate Miscanthus genes responsible for flowering and prevent it from happening too early in the growing season. That will leave farmers with tall, hearty plants that will yield the most biomass possible.

Their efforts caught the attention of venture capitalists and biotechnology companies that hope to make Miscanthus farming a profitable and widespread practice. One company, Mendel Biotechnology, was so interested in the potential crop they partnered with Kim and Paterson on their Miscanthus project.

Mendel distributes plants and plant seed that have been enhanced through genetic research to farmers and other industry partners for bioenergy crop production. “There is a lot of basic research that we cannot afford to do,” said Donald Panter, senior vice president of BioEnergy Seeds at Mendel. “We are a company that is trying to commercialize a product and serve our customers, so our relationship to academia in the U.S. is critical.”

The genetic map promises to save Mendel many years of field research to improve Miscanthus. Without the map, researchers and breeders must go out into farmland and take thousands of measurements of plant characteristics in many different locations to determine which plants have the greatest potential as the beginnings of a biofuel crop. With the genetic map, they can select the best plant varieties at the molecular level much more rapidly.

“We really want to leverage the know-how we get from American academia to help us speed up the process of creating from nothing a commercial species that can be planted on millions of acres in the next 10 to 15 years,” Panter said. “We wouldn’t be as far along the way if we didn’t have people like Andy Paterson helping us.”

Large-scale production of Miscanthus for biomass will take several years, but Kim and Paterson’s research is an important initial step in the process.

“This is just the beginning,” Kim said. “We want to provide breeders with a valuable resource for their future breeding efforts. That’s our long-term goal.”