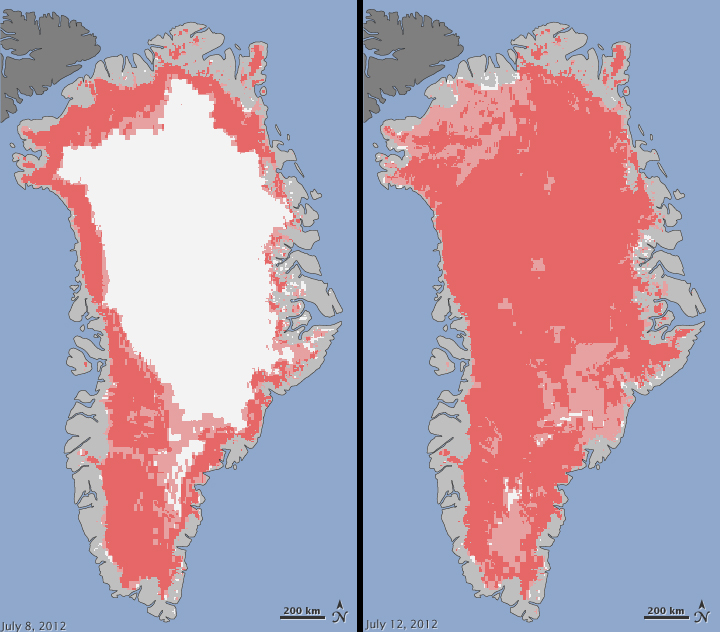 Extent of surface melt over Greenland's ice sheet on July 8

Athens, Ga. – Independent measurements from a University of Georgia climatologist and data from NASA show that for several days this month, nearly the entire ice cover of Greenland experie¬nced some degree of melting at its surface.

On average, about half of the surface of Greenland’s ice sheet naturally melts in the summer. The new data—from three different satellites—show that an estimated 97 percent of the ice sheet surface thawed at some point in mid-July.

“This is the first time we have witnessed almost all of the ice sheet melt in the three decades of satellite data,” said Thomas Mote, professor and head of the department of geography in the UGA Franklin College of Arts and Sciences. “The last time this occurred was more than 100 years ago, long before satellite data were available.”

Researchers have not yet determined whether this extensive melt event will affect the overall volume of ice loss this summer and contribute to sea level rise.

“Ice cores from Summit show that melting events of this type occur about once every 150 years on average. With the last one happening around 1890, this event is right on time,” said Lora Koenig, a Goddard glaciologist and a member of the research team analyzing the satellite data. “But if we continue to observe melting events like this in upcoming years, it will be worrisome.”

“This event combined with other natural but uncommon phenomena such as the large calving event last week on Petermann Glacier are part of a complex story,” said Tom Wagner, NASA’s cryosphere program manager in Washington. “Satellite observations are helping us understand how events like these may relate to one another as well as to the broader climate system.”

Mote became involved with the recent analysis after he received an email from a colleague in Greenland who was wondering why there was so much runoff from the ice sheet this summer. She noted that the runoff was creating flooding along the Watson River near Kangerlussuaq, in western Greenland.

Mote examined passive-microwave satellite data from the Special Sensor Microwave Imager/Sounder, or SSMI/S, on a U.S. Air Force meteorological satellite, and it revealed the broad extent of melting. He then consulted with Dorothy Hall at NASA Goddard Space Flight Center in Greenbelt, Md. Hall studies the surface temperature of Greenland using the Moderate-resolution Imaging Spectroradiometer, or MODIS, on NASA’s Terra and Aqua satellites, and she confirmed that MODIS showed unusually high temperatures and that melt was extensive over the ice sheet surface.

Son Nghiem of NASA’s Jet Propulsion Laboratory in Pasadena, Calif., analyzed data from the Indian Space Research Organisation’s Oceansat-2 satellite earlier this week and also found that most of Greenland appeared to have undergone surface melting on July 12.

The melting spread quickly. Melt maps derived from the three satellites showed that on July 8, about 40 percent of the ice sheet’s surface had melted. By July 12, at least 97 percent had melted.

This extreme melt event coincided with an unusually strong ridge of warm air, or a heat dome, over Greenland. The ridge was one of a series that has dominated Greenland’s weather since the end of May. This latest heat dome started to move over Greenland on July 8, and then parked itself over the ice sheet about three days later. By July 16, it had begun to dissipate.

“We were seeing anomalous areas of warm air over the ice sheet, similar—in character, not magnitude—to what is occurring over the Great Plains this summer,” Mote said.

Even the area around Summit Station in central Greenland, which is two miles above sea level and near the highest point of the ice sheet, showed signs of melting. Melting has not occurred at Summit Station since 1889, according to ice cores collected and analyzed by Dartmouth College researchers.

A National Oceanic and Atmospheric Administration weather station at Summit confirmed that air temperatures hovered above or within a degree of freezing for several hours from July 11 to July 12.

Mote is currently collaborating with Hall and Nghiem on a NASA-funded project that will compare the relative strengths of each three types of instruments. And he’s working on another NASA-funded project to produce a high-quality, historical record of surface melt area on Greenland that will improve the ability of scientists to put events such as this month’s melt into context.

“With this record, we’ll be able to better define what a typical amount of summertime melt is for Greenland and have a better sense of trends in melt over time,” Mote said.