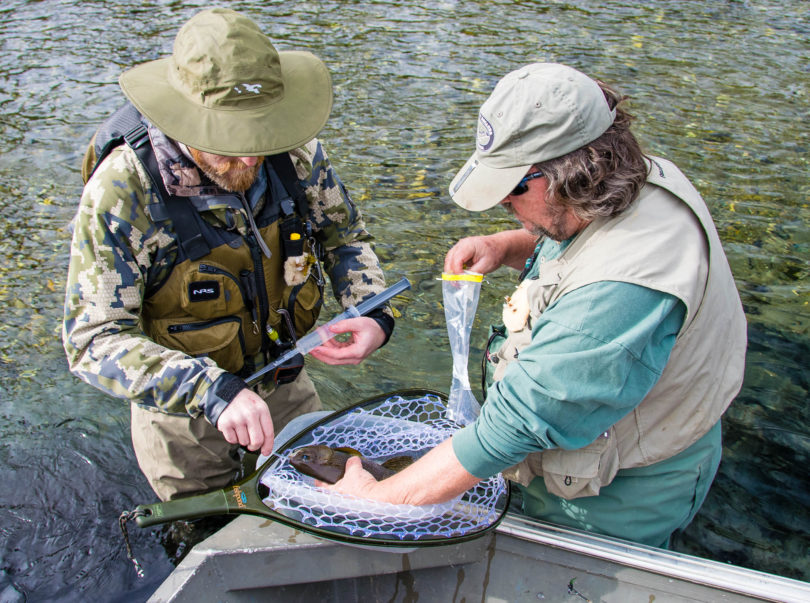 Athens, Ga. – A University of Georgia professor will use a nearly $500,000 grant to study Chinook salmon in Alaska, where populations of the fish have been in decline for more than a decade.

Gary Grossman, a professor in UGA’s Warnell School of Forestry and Natural Resources, along with Warnell post-doctoral research associate Jason Neuswanger, will assess habitat-related factors affecting the number of juvenile Chinook salmon a river can support—specifically how much water flow and food is necessary for the fish to survive. Grossman and Neuswanger’s work will focus on rivers in the Arctic-Yukon-Kuskokwim drainage, which encompasses more than 40 percent of the land in Alaska and where the salmon is in heavy decline.

“Little is known about the factors affecting the foraging biology or habitat use of juveniles or resident adults of these species, and this information surely will aid in future conservation and management efforts,” Grossman said.

Chinook salmon, also called king salmon, is the largest North American salmon and is found in the north Pacific Ocean and rivers from California to Alaska. The salmon is highly sought-after by commercial and recreational fisheries; however, nine populations of Chinook salmon are listed as either threatened or endangered.

According to the Acrtic-Yukon-Kuskokwim Sustainable Salmon Initiative, salmon returning to spawn in western Alaskan rivers have been declining for more than a decade, leading to restrictions on commercial fisheries in the area. But why this is happening isn’t quite clear, Grossman said.

Using a $495,282 grant from the North Pacific Research Board, he and Neuswanger will construct a general mathematical model detailing the processes involved in feeding by these salmon. Although their work focuses on juvenile Chinook salmon, they also will examine the effects of prey capture and availability and current on two additional species: the arctic grayling and the Dolly Varden trout, related species that are important sport and subsistence fish for Alaskans.

Grossman plans to develop and test a “fitness-based foraging model” that can predict how the salmon, grayling and Dolly Varden are foraging for food. Chinook salmon are “drift-feeders” who eat food they find drifting in the water column. Knowing the driving force behind these foraging habits will help researchers understand energy intake and diet composition and habitat quality.

Previous attempts to determine those factors, however, used faulty assumptions that have since been disproven. The new model should eliminate those inaccuracies, Grossman explained, but he and Neuswanger will finalize development of the model, conduct experiments to estimate some of the variables and test it using the three fish species.

“Our model will be general for fishes that feed on invertebrates drifting in streams, which comprise the majority of stream fishes in North America and likely north temperate streams in general,” Grossman said.

The project will focus on three sites: the Chena River, Richardson Clearwater River and Panguingue Creek, all in Alaska. The study will use high-resolution video equipment to observe the feeding rates and prey consumed in the rivers.

The researchers also plan to produce a short documentary video about the project, which will emphasize the importance of the Chinook salmon in that region, why they are investigating the foraging behavior and the results of their study. This documentary will be used to help educate the public on this issue, and they plan to distribute it to public schools in Alaska, as well as post information online.