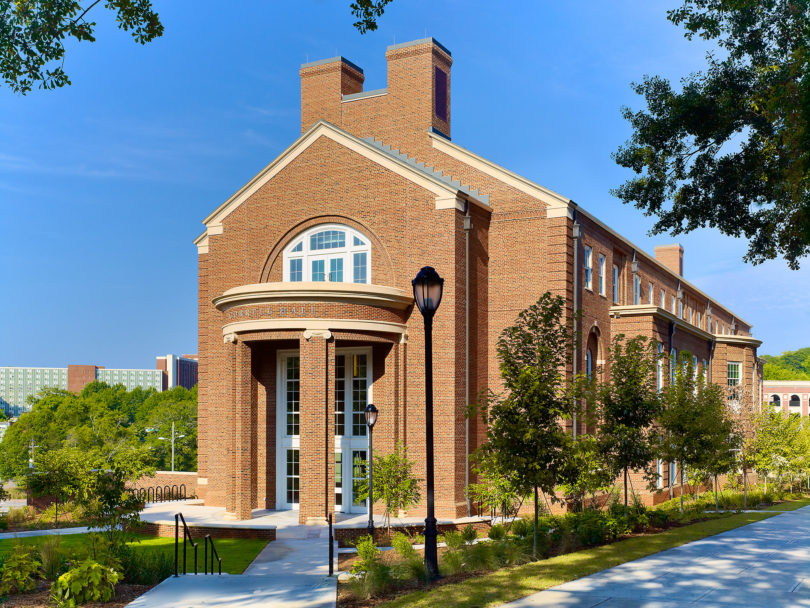 Athens, Ga. – The University of Georgia will celebrate the completion of Correll Hall and the groundbreaking for Amos Hall and Phase II of the Business Learning Community with a ceremony Sept. 18 at 1 p.m. on the lawn of Correll Hall.

The event is open to the public. Supported entirely by private donations, Correll Hall is named in honor of alumni A.D. “Pete” and Ada Lee Correll and houses the Terry College of Business’ graduate programs.

Phase II, made possible by a public-private partnership involving significant private and state funds, will accommodate Terry College’s undergraduate programs. At its center will be Amos Hall, named in honor of alumnus Daniel P. Amos.

“The new Business Learning Community is a great example of the strong public-private partnerships that the University of Georgia relies on to create the kind of world-class learning environment that a major research institution requires,” Morehead said.

“Thanks to the generous support of our alumni and friends and the state of Georgia, the Terry College will have facilities that will keep our students, faculty and programs on the forefront of excellence in business education,” Ayers said. “The Business Learning Community will allow us to make an even greater impact on the economic development of our state and nation by elevating the educational experience of the next generation of business leaders.”

The Business Learning Community is located at the corner of Baxter and Lumpkin streets. Classes have already begun in the 74,000-square-foot Correll Hall, which includes state-of-the-art classrooms, team project rooms and a business innovation lab. Amos Hall and Phase II of the Business Learning Community will be approximately 140,000 square feet, featuring two large auditoriums, eight classrooms, a trading room, a music business recording lab and an undergraduate commons.

Prior to the groundbreaking and dedication ceremony, Pete Correll and Dan Amos will be the guest speakers at the Mason Public Leadership Lecture at 10 a.m. in the auditorium of the Richard B. Russell Building Special Collections Libraries. The event is open to the public.

Supported by a donation from Terry College of Business alumnus and lawyer Keith Mason, who has held various public service roles throughout the past 20 years, the Mason Lecture is part of the Institute for Leadership Advancement’s student-led Terry Leadership Speaker Series. The lecture features prominent business leaders who have contributed significantly to their communities or spent time in a public service role.

More information about the Mason Lecture can be found at www.terry.uga.edu/tlss.

More information about the groundbreaking and dedication can be found at www.terry.uga.edu.

About Terry College
Founded in 1912, the Terry College of Business at the University of Georgia is the flagship business school in the state and is consistently ranked among the top in the nation. Terry faculty are committed to high-quality research and instruction, preparing students for the global business community. Terry offers an array of undergraduate, graduate and executive programs. The college is home to the renowned Selig Center for Economic Growth. For more information, see www.terry.uga.edu.