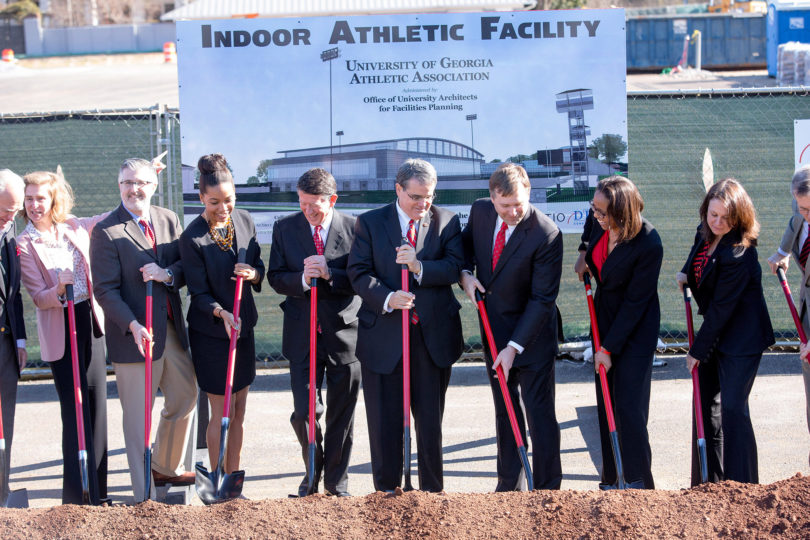 Construction on the $30 million Indoor Athletic Facility began in December and is scheduled for completion in January 2017. It will include a 100-yard football practice field

Mounds of red clay peeked over paneled construction fences Feb. 16 as the official start of the UGA Indoor Athletic Facility was marked with a ceremonial groundbreaking.

The weather forecast the day before—of icy rain and freezing temperatures-accentuated the need for a building where UGA athletes of all types—from the baseball players going through warmup exercises on Foley Field to the UGA football team preparing for the upcoming season—can practice without concern for the weather.

Construction on the $30 million facility began in December and is scheduled for completion in ­January 2017. It will include a 100-yard football practice field, a 65-meter track runway, jumping pits, a netting system, four retractable batting cages and other features that will maximize its use for UGA sports.

“This new state-of-the-art facility represents the University of Georgia’s commitment to providing our more than 550 talented student-athletes with the tools they need to succeed at the highest levels of competition,” said UGA President Jere W. Morehead.

He specifically thanked donors of the Magill Society for going above and beyond to raise private funds for the project. Greg McGarity, the J. Reid Parker Director of Athletics, echoed his sentiments, noting that donors and friends of UGA have responded at an amazing pace, with signed pledges in hand for $20.3 million as of Feb. 16.

“This is a first-class facility, and it’s going to enhance our ability to prepare and compete at a championship level,” said head football coach Kirby Smart. “… I want everybody to understand that we will be good keepers of this investment. We will utilize this facility all year long to train and develop our team.”

He joked that he is able to keep very close watch on the building’s progress—his office and its window directly overlook the construction site—”so that the progress I get to see every day is both seen, felt and heard on a firsthand basis.”

Kendall Williams, a three-time national track and field champion, represented student-athletes at the ceremony. She told attendees that “the facility puts an exclamation point” on the Athletic Association’s backing of student-athletes.

During construction this spring and fall, the football team will practice at a location off South Milledge Avenue near the UGA soccer-softball complex. The temporary practice area is currently part of the UGA club sports complex and will feature two full-length natural grass fields and one full-length artificial turf field.

When the indoor facility is completed, the Athletic Association will return the significantly upgraded complex to the UGA club sports program.