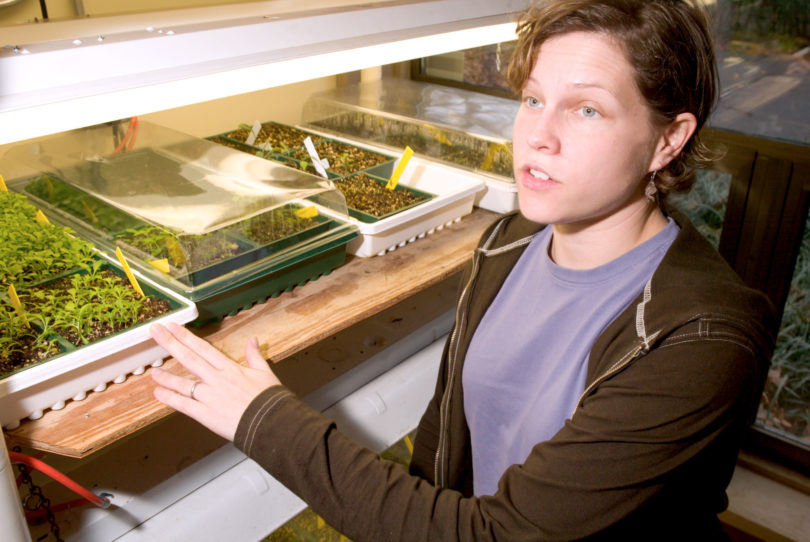 Heather Alley and some of the volunteer Botanical Guardians will be reintroducing these royal catchfly seedlings in Union County in spring.

Heather Alley, who got her master’s degree at UGA in horticulture, coordinates the Botanical Guardians program in Georgia from the research lab at the State Botanical Garden. She explained the program to Columns.

Alley: Botanical Guardians is a network of volunteers across the state of Georgia who monitor rare plant populations and serve as stewards for rare plant habitats, usually under powerline right-of-ways.

Columns: Because that’s where such populations might still be found?

Alley: Yes-a lot of rare plants live under powerline right-of-ways, because that’s one of our last remaining places of early successional habitat. Since we don’t let wildfires burn and Native Americans aren’t clearing the land, there aren’t many grassland habitats remaining in the Southeast. Powerlines and roadsides serve as refugia for early successional species.

The volunteers monitor and visit these powerline sites every month during the summer. Unfortunately the plants in these areas are at risk not just from powerline maintenance activities but also from four-wheel driving and vandalism. The volunteers report back to the authorities-to the state Department of Natural Resources or the utility company-so threats can be dealt with quickly.

Columns: Are there other programs like this in other states?

Alley: This was modeled after a large network in New England. They have hundreds of volunteers and a full-time staff member and do lots of work for the natural resources departments in those states. In addition to monitoring rare plant sites, they do things like invasive species removal. They’re highly trained and they put in hundreds of hours of work.

Columns: And how long has the program existed in Georgia?

Alley: A year in full force, three years since it started. It started with two volunteers at Manassas Bog near Statesboro, and each year we’ve gotten a couple more volunteers. Now we’re up to 13 powerline sites and 13 rare species searches, and this year we’re going to be adding a lot more.

Columns: Who started it?

Alley: GPCA-the Georgia Plant Conservation Alliance. It’s a network of institutions that do plant conservation around the state-botanical gardens, universities, the Department of Natural Resources, the Forest Service. We collaborate on projects.

GPCA identified this project as a good way to get more work done, after seeing the results in New England. There just aren’t enough people on staff in any of these organizations to do half of what needs to be done. All our directives come from the Georgia Natural Heritage Program of the Georgia DNR-they determine priorities and they have all the data.

Columns: And the volunteers keep track of their assigned spot?

Alley: Yes. The volunteers live near their site. They are mostly people who were already concerned about conservation of threatened and endangered plants. They fill out a rare plant data sheet every time they go into the field. They do a count, they list associated species, and they identify threats they see, like four-wheeling or invasive species encroachment or horseback riding.

Most of these sites belong to Georgia Power and they’ve been really cooperative. They’ve posted “Do Not Mow” signs flanking the plant populations. At one site hunters have been using the signs for target practice, so that’s something the volunteers watch for-both for their own safety (they wear orange vests) and to let us know when it’s time to replace the signs.

Some of the volunteers really run with this idea-they’re amazing. One group had an Elliottia party, a barbecue, and invited everybody in the community so they’d know about the project and be able to recognize the plants at their site.

Columns: What are the threatened plants you’re working with?

Alley: Many people know about pitcher plants. We have five pitcher plant bogs under powerline right-of-ways and they have many species of pitcher plants-Saracenia-and rare orchids. One of them has Elliottia racemosa. That’s the Georgia plume. It’s a tree that’s found only in Georgia, where it is threatened.

One success story is the royal catchfly, Silene regia. We’re in the southernmost limit of its range in far northwest Georgia near Chattanooga, and we’ve been able to do a reintroduction, doubling the population. It’s really easy to grow. We collect seeds, bring them back here to the Garden and grow them, and then plant them back in their native habitat.

Another species we’re working to do that with is fringed gentian, which is classified as threatened by the state. It’s a beautiful flower-we’re trying to propagate it, but it’s tricky to grow.

Columns: There must be concerns about collecting seeds from an endangered species.

Alley: Yes, there are strict guidelines. There’s generally a 5 percent rule-if there are 100 flowers, you can only collect from five. We get official permits from the botanists at DNR every time. The Silene regia seedlings we have now are going to be reintroduced this spring.

Columns: Where will they go?

Alley: Union County. Another interesting site is on a rock outcrop, a really threatened habitat in Georgia. They’ve been heavily impacted by granite mining, and they’re desirable places to develop. But there is a whole host of unique species that grow only there. There’s a lot to do.