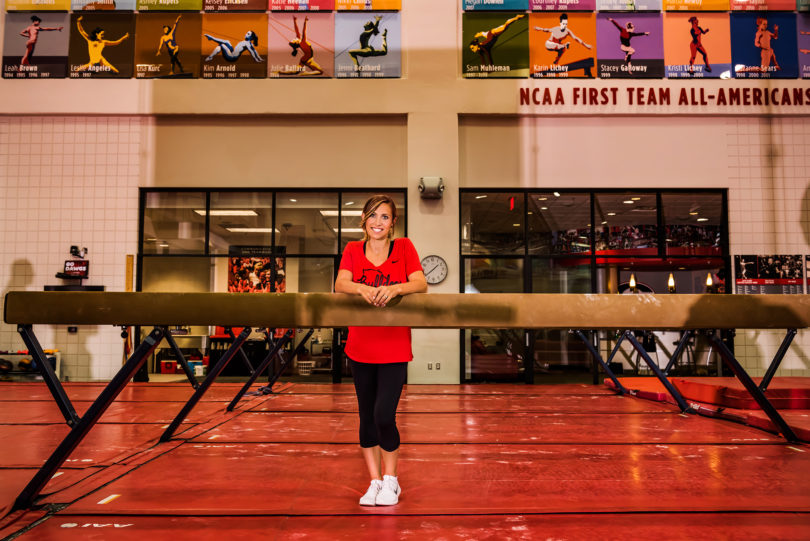 The GymDogs are hungry. They have something to prove. Expectations are high. With the GymDogs, they’re always high.

Coach Courtney Kupets Carter  knows this. “People are going to be watching you,” she tells her team. “They’re waiting to see every move you make. Go show them what you’re made of.”

Kupets Carter directs that challenge at her athletes. But she very easily could be talking about herself.

On May 9, Kupets Carter was named the new head coach of the Georgia’s women’s gymnastics team. Kupets Carter has coached individual gymnasts and at the club level for more than a decade, but UGA is her first collegiate coaching position. It’s an inspired hire.

Kupets Carter is the greatest collegiate gymnast in history, and no one else is really close. In her UGA career, she won 13 NCAA championships, including three all-arounds and at least one title in every individual event—the only competitor to accomplish that feat. That number could have been even higher had she not missed her junior season with a torn Achilles.

Kupets Carter, a member of the USA Gymnastics Hall of Fame, was already a superstar before donning the red and black. A national team fixture in the early 2000s, she won three national and two world titles, plus an Olympic silver medal in the team competition at the 2004 Athens Games and an individual bronze in the uneven bars.

The GymDogs won the NCAA team title each of Kupets Carter’s four years. With a total of 10 national championship banners hanging in Stegeman Coliseum, the GymDogs are the sport’s most successful program and the university’s most honored team. The last of those championships, though, came in 2009—Kupets Carter’s senior season.

If the GymDogs are to return to their glory days, it will be Kupets Carter who’ll lead them there. But she’s not alone. She leads an entirely new staff that also includes volunteer coach Suzanne Yoculan Leebern, Kupets Carter’s former UGA coach and the architect of those 10 national championship teams.

She also has a fresh, positive perspective.

“You have to take a step back when you’re done competing,” she says. “I learned so much doing gymnastics, and it made me grow as a person. You start at 3 years old. It is your entire life, and college is the pinnacle of that. I ask the athletes, ‘This is the last four years of your career. What are you going to do with them?’ I want those last years to be something special.”