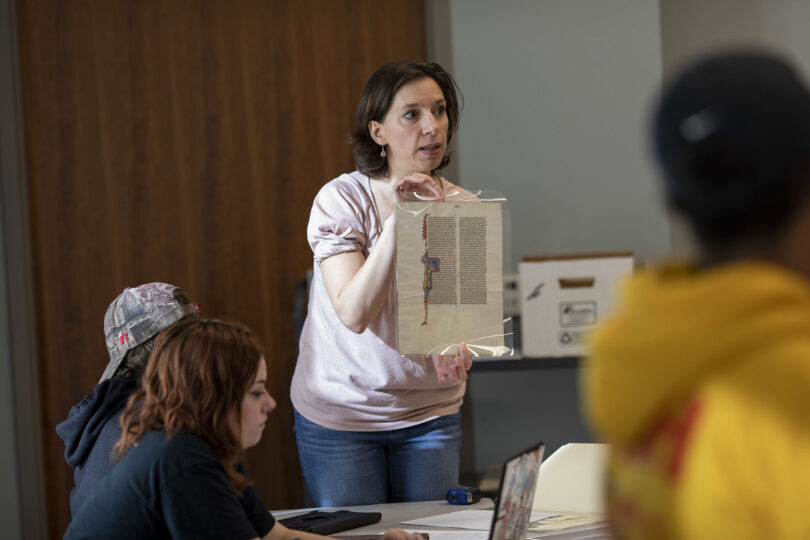 English Professor Cynthia Camp holds up a manuscript in her Manuscripts Class at the Special Collections Libraries. (Photo by Andrew Davis Tucker/UGA taken before March 2020)

Library project allows them to dive deep into medieval manuscripts

It’s one thing to read and study medieval stories, but it’s another for students to touch, translate and research 600-year-old manuscripts. Thanks to an innovative series of classes called The Hargrett Hours Project hosted at the University of Georgia Special Collections Libraries, students had that opportunity, and now their work is on display in the building’s galleries. 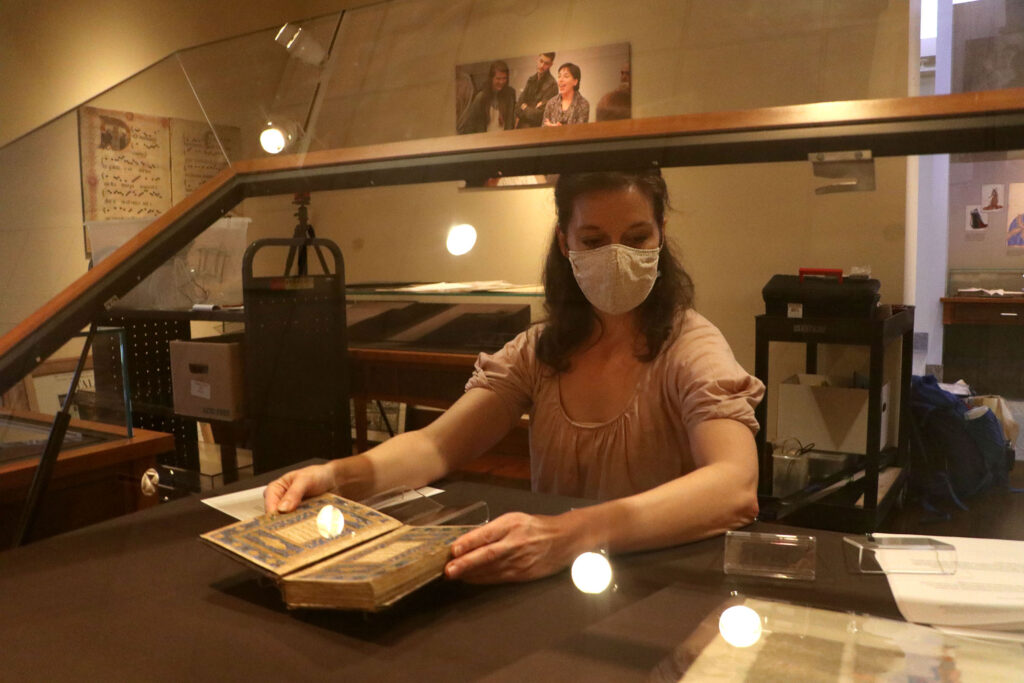 Cynthia Camp, associate professor of English, installs a collection of Persian Sufi poetry in the new exhibit “The Hargrett Hours” at the Special Collections Libraries at the University of Georgia. (Photo by Camie Williams)

An exhibit, “The Hargrett Hours: Exploring Medieval Manuscripts,” presents the insights students gained while investigating medieval manuscripts in the collections of the Hargrett Rare Book and Manuscript Library. The display includes original items from the collections, dating back centuries, as well as the findings from the students’ in-depth study of a Book of Hours.

“It’s just so exciting. This is a 600-year-old book and I get to touch the edges and look at it,” UGA alumna Georgia Early said about taking the Hargrett Hours course with Cynthia Turner Camp, associate professor of English and inaugural member of the Special Collections Libraries Faculty Fellows program. “There is so little known about them, so anything you find is super exciting and had never been found before. It’s like a treasure hunt.” 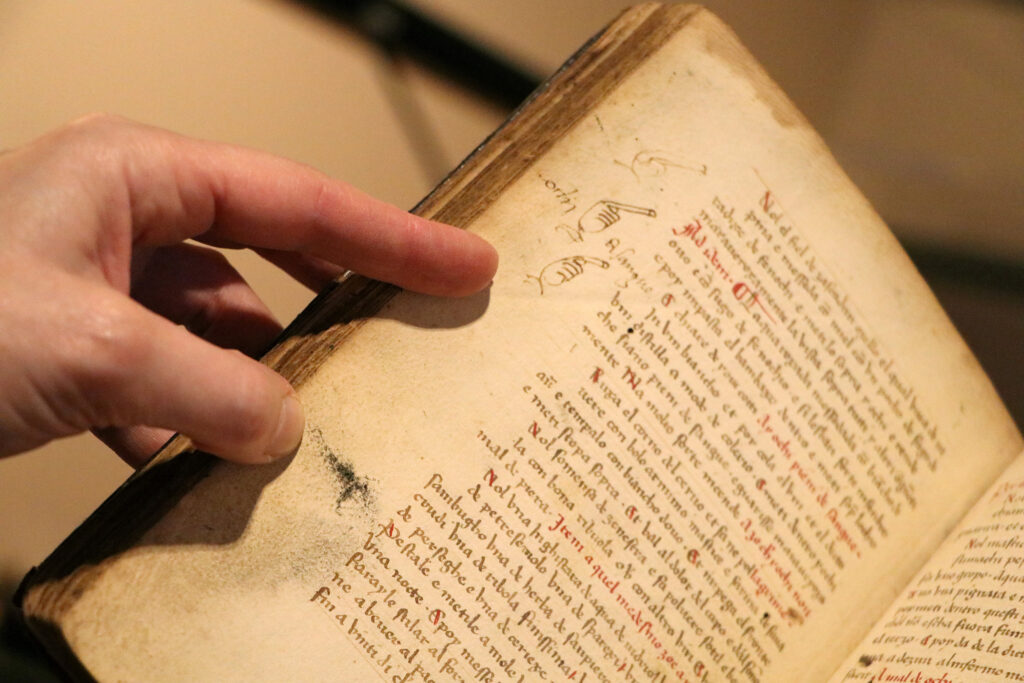 A look at the details inside Trattati dei veleni (Treatise on Poisons) published in 1454. Many pages have drawings of manicules, or pointing hands. Added by later readers, these manicules point out important sections of the text. (Photo by Camie Williams)

A Book of Hours is a handmade devotional book, popular in the Middle Ages before the advent of printing presses. These tomes often include text, prayers and psalms that were selected by a wealthy owner and written and illustrated by hand. The book that is held at UGA, which is commonly referred to as the Hargrett Hours, dates back to 15th century Paris.

Along with the medieval texts and modern research findings, photos chronicling the students’ work are on display in the exhibit, which Early curated during an independent study with Camp in spring 2020.

“Doing this kind of research is really exciting because you never really know where to look,” said Early, who graduated with a bachelor’s degree in English last year. She explained that students delved into a number of research avenues, including embarking on scientific experiments to determine the pigments and materials used to create the text and illustrations 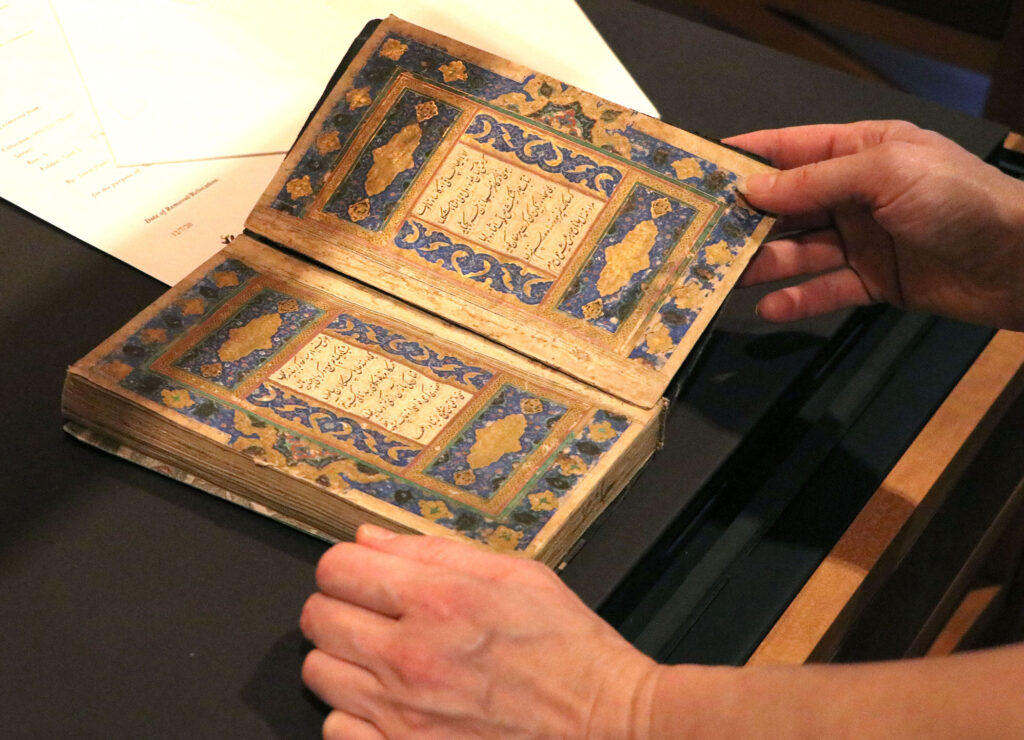 Centuries-old documents and manuscripts will be on display in the exhibit “The Hargrett Hours: Exploring Medieval Manuscripts” at the Special Collections Libraries at the University of Georgia through Aug. 26. (Photo by Camie Williams)

Since 2016, classmates have worked together on projects to translate middle French, understand historical context, and make other discoveries. “You use every floor of the (Main) Library — you explore art, science and religion and all sorts of things to figure out what’s happening,” she said.

Camp’s undergraduate course was developed as part of the Special Collections Libraries Faculty Fellows program, which partners archivists with faculty members in a variety of disciplines to engage students in the use of historical materials housed in the special collections vault.

“From the first day of class, it was inspiring to watch my students become passionate about their research and gain new skills and insights along the way,” Camp said. “The book is 600 years old, but the knowledge about it is new and exciting, and many of my students have gone on to apply their research skills in their future work and in graduate school. I’m thankful to the Special Collections Libraries for helping craft and teach this course year after year.”

Camp, Early and other alums from Hargrett Hours classes discussed their research experiences in a recent virtual discussion on Facebook Live. You can  view the event and you can also read students blog posts about their work.

The exhibit will remain on display through Aug. 26. Before arriving to UGA’s campus, visitors should check their symptoms via UGA’s Dawg Check tool. Masks are required and visitors must follow social distancing guidelines in the galleries.

For more information about the exhibit, contact Jan Hebbard, exhibition coordinator, at jhebbard@uga.edu or visit https://www.libs.uga.edu/hargrett/.