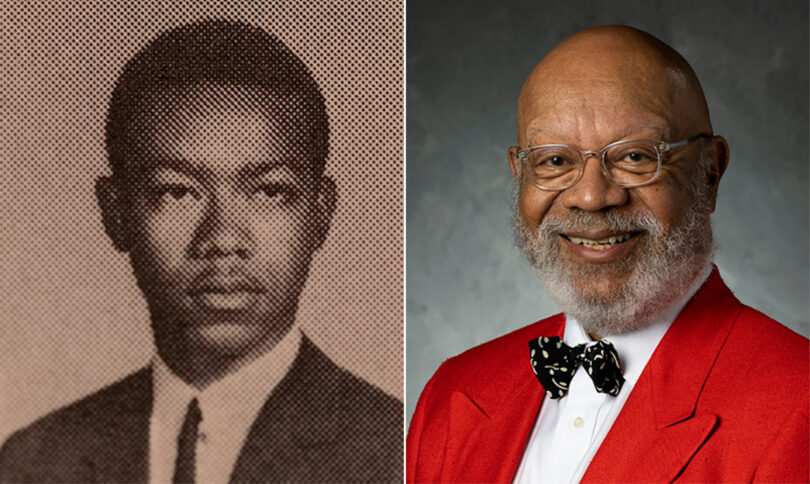 Harold Alonza Black as a UGA student and today.

Harold Alonza Black, among one of the first African American students to enroll as freshmen and complete their undergraduate degrees at the University of Georgia, was recently honored Aug. 4 during the dedication of Black-Diallo-Miller Hall, the newest residence hall on campus.

Black retired as professor emeritus of the University of Tennessee – Knoxville after 24 years of service as the James F. Smith Jr. Professor of Finance. A native of Atlanta, he earned his master’s and doctoral degrees from the Ohio State University.

“It’s going to be almost 60 years to the day that I walked into Reed Hall as a freshman that freshmen will enter this building. I can guarantee you one thing: the atmosphere will be a lot warmer, a lot more welcoming than it was 60 years ago,” said Black, the University’s first African American male freshman and the first African American graduate of the Terry College of Business. “It was an interesting time, an interesting experience, and I want to thank everyone past and present who helped make that possible.”

Through the years, Black served on the faculties of American University, Howard University, the University of North Carolina and the University of Florida. Over the course of his distinguished career, he has received numerous awards for his teaching and research as well as honors from the U.S. Department of Treasury, National Credit Union and the National Urban League. The Terry College has established the Dr. Harold A. Black Professorship at the Terry College of Business in his honor.