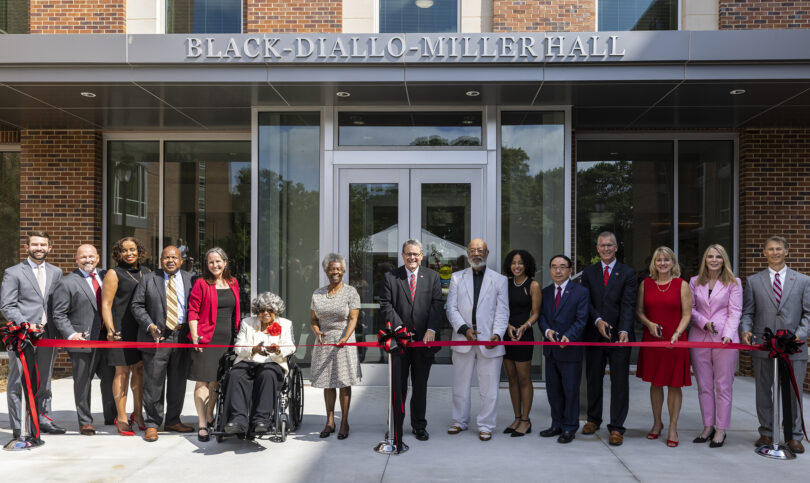 The University of Georgia held a dedication ceremony Aug. 4 to celebrate the naming of Black-Diallo-Miller Hall, UGA’s newest residence hall.

The residence hall, which is located on Baxter Street, is named in honor of Harold Alonza Black, Mary Blackwell Diallo and Kerry Rushin Miller, the first African American students to enroll as freshmen and complete their undergraduate degrees at UGA. It will house 525 first-year students in double occupancy rooms beginning this fall, which marks the 60th anniversary of the year Black, Diallo and Miller enrolled as freshmen.

“The three alumni we are honoring today faced challenging circumstances when they were here as students in the 1960s, but each of them persevered and went on to earn their degrees and make significant contributions to our society throughout their lives and careers,” said President Jere W. Morehead at the dedication ceremony. “The naming of this building is our way of ensuring that their stories are now forever a part of our institution’s history.”

Other speakers at the event included Jadin Marshall from Powder Springs, Georgia, who will be a resident assistant in Black-Diallo-Miller Hall this fall; Victor K. Wilson, vice president for student affairs; and all three of the honorees for whom the residence hall is named.

All the honorees recognized family members, friends, mentors and colleagues who supported and inspired them throughout their lives. 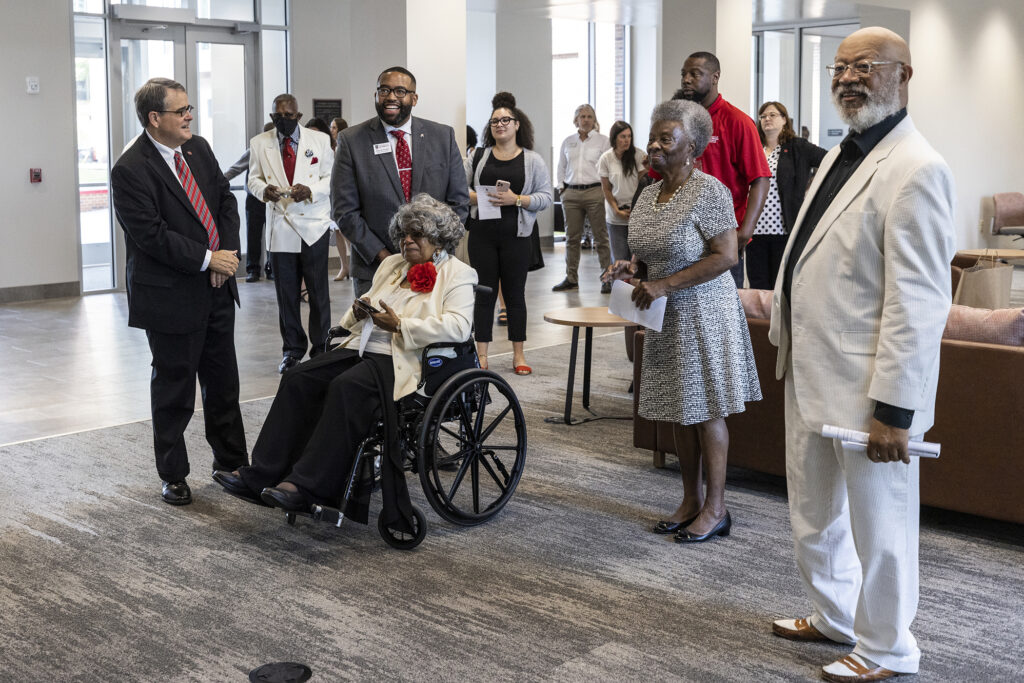 UGA President Jere W. Morehead stands with Kerry Rushin Miller, Mary Blackwell Diallo and Harold A. Black as they look at paintings of themselves by artist Richard Wilson in the lobby of Black-Diallo-Miller Hall. (Chamberlain Smith/UGA)

“I would like to thank my family and friends who are here,” said Miller, who was the first African American to earn a bachelor’s degree in mathematics from the University of Georgia in 1966 and shortly thereafter began an extensive professional career in the telecommunications industry. “I am so honored to have this building bear the name of Miller on it.”

Miller retired from BellSouth after 29 years of distinguished service, primarily based in Charlotte, North Carolina. She was a participant in Leadership Charlotte and received numerous accolades for her service to the Charlotte community. She joined the Urban League of Central Carolinas, Inc., following her retirement from BellSouth, and later joined the Charlotte Club of the National Association of Negro Business and Professional Women’s Clubs (NANBPWC).

While with the Charlotte Club, she developed an award-winning education program designed to help at-risk elementary and middle school students raise their self-esteem, strive for excellence and achieve their personal best.

“To President Morehead, members of the Board of Regents, platform guests and members of the audience, I would like to express my sincere appreciation of this honor,” said Diallo, who was the first African American student from Athens to enroll in the University of Georgia. “I would love to call the names of hundreds of people who have made this day possible for me, but my time is limited before you. I would like to thank the University of Georgia for recognizing the contributions my fellow classmates and I have made to the history of this institution.”

Diallo earned bachelor’s and master’s degrees in French literature from UGA and a doctorate from Emory University. She taught at Morehouse College and at Florida A&M University (FAMU), from which she retired last year after a long and productive career.

She served as coordinator of language and study abroad programs and as an associate professor of French. She had previously served as president of FAMU’s faculty senate and as a member of the university’s board of trustees. She was a contract interpreter for the U.S. Department of State and participated in Fulbright Exchange Teacher Fellowships in Benin and France.

“It’s going to be almost 60 years to the day that I walked into Reed Hall as a freshman that freshmen will enter this building. I can guarantee you one thing: the atmosphere will be a lot warmer, a lot more welcoming than it was 60 years ago,” said Black, the University’s first African American male freshman and the first African American graduate of the Terry College of Business. “It was an interesting time, an interesting experience, and I want to thank everyone past and present who helped make that possible.” 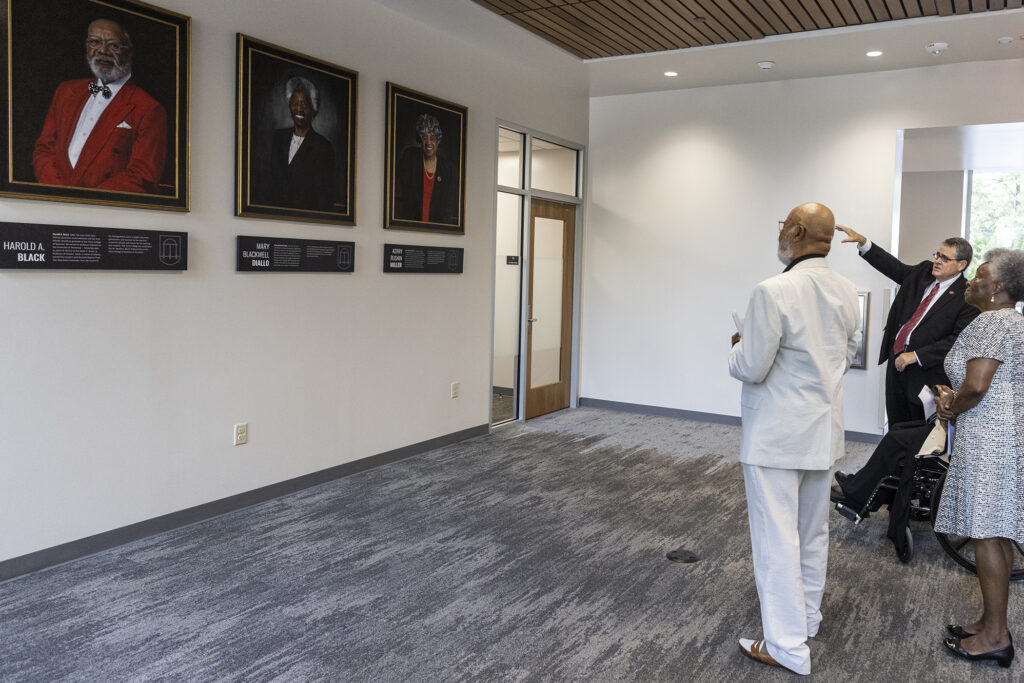 Honorees view their portraits hanging in the lobby of Black-Diallo-Miller Hall along with President Jere W. Morehead. (Chamberlain Smith/UGA)

Black retired as professor emeritus of the University of Tennessee – Knoxville after 24 years of service as the James F. Smith Jr. Professor of Finance. A native of Atlanta, he earned his master’s and doctoral degrees from the Ohio State University.

Through the years, he served on the faculties of American University, Howard University, the University of North Carolina and the University of Florida. Over the course of his distinguished career, he has received numerous awards for his teaching and research as well as honors from the U.S. Department of Treasury, National Credit Union and the National Urban League. The Terry College has established the Dr. Harold A. Black Professorship at the Terry College of Business in his honor.

Portraits of all three honorees are on display in the lobby of the building.

Construction of the six-story, $50 million project began in December 2020. The building features an exterior courtyard and is the first new residence hall since 2013.

When residents move in for the fall semester, they will enjoy large windows, built-in closets, in-room temperature control and privacy-enhanced community bathrooms, as well as extensive shared lounge and study areas to support academic success and personal growth.