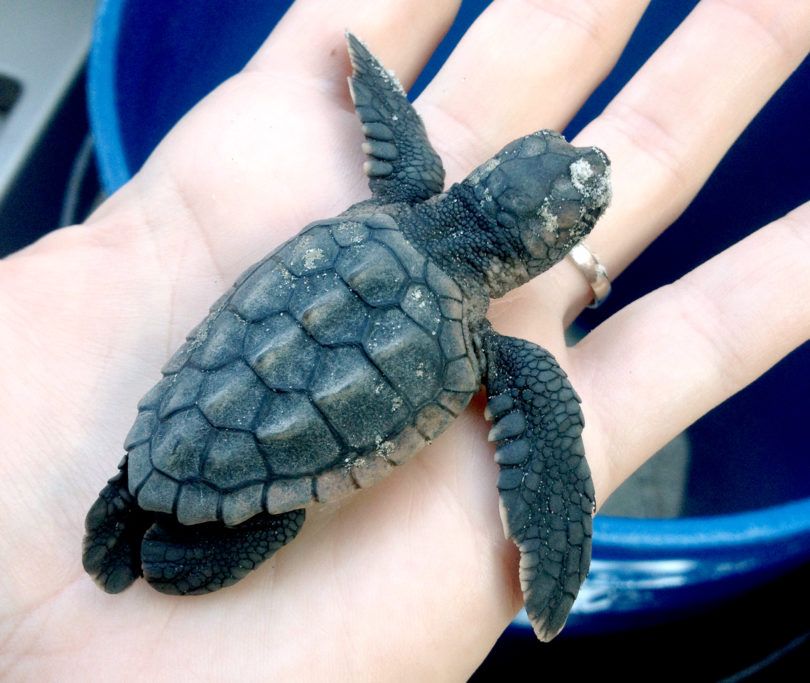 Savannah, Ga. – Visitors to the Skidaway Marine Science Day will be able to catch a rare glimpse of Rider, the University of Georgia Aquarium’s new hatchling loggerhead sea turtle, on Oct. 26 from 11 a.m. to 3 p.m. Held on the north end of Skidaway Island, the free event will include behind-the-scenes tours of the aquarium, opportunities to explore research vessels and hands-on science activities.

The event is jointly presented by the UGA Aquarium and UGA Shellfish Laboratory, which are both part of Marine Extension, a public service and outreach unit of UGA, and by the UGA Skidaway Institute of Oceanography, Gray’s Reef National Marine Sanctuary and the Nature Conservancy.

Only seven weeks old, Rider occupies a holding tank behind the scenes at the aquarium. Attendees can sign up at the aquarium welcome table for a tour of the space during Skidaway Marine Science Day. Only a limited number of openings will be available.

Rider hatched on Aug. 29 in the Wassaw Island National Wildlife Refuge but never made it out of the nest to begin ocean life. Rider was discovered by Kris Williams of the Caretta Research Project, a long-term monitoring study of loggerhead reproduction and population trends that began in 1973. In collaboration with the U.S. Fish and Wildlife Service, Rider was rescued and transferred to the UGA Aquarium to help inspire and educate people about sea turtle conservation along the Georgia coast.

Loggerheads are one of five sea turtle species that nest along the Georgia coast. While they are the most common, they are listed as threatened by the U.S. Fish and Wildlife Service and the Georgia Department of Natural Resources. Only one in 100 loggerheads survive to adulthood. DNR reports indicate that, after about 35 years of conservation efforts at the federal and state level, nesting numbers on the Georgia coast have been increasing dramatically over the last several years.

Rider’s name refers to the early stage in the loggerhead life cycle, during which turtles off the eastern coast of the U.S. ride ocean currents far out in the Sargasso Sea and North Atlantic Gyre.

Ossabaw, Rider’s predecessor at the UGA Aquarium, is now two years old and currently on display in one of the main tanks. Loggerheads are kept at the UGA Aquarium for three to four years before being released into the wild or transferred to larger aquariums like the Georgia Aquarium in Atlanta.

Loggerhead sea turtles can reach sizes of approximately 48 inches in shell length and weigh up to 350 lbs. They reach sexual maturity between 20-30 years of age and nest on the Georgia coast generally during the months of April to September. Adult females can lay 50-120 golf-ball-sized eggs during a single nesting event, and egg temperature determines the gender of the offspring. Hatchlings feed on small invertebrates while juveniles and adults feed mainly on crabs and mollusks as well as sea jellies, salps and barnacles.