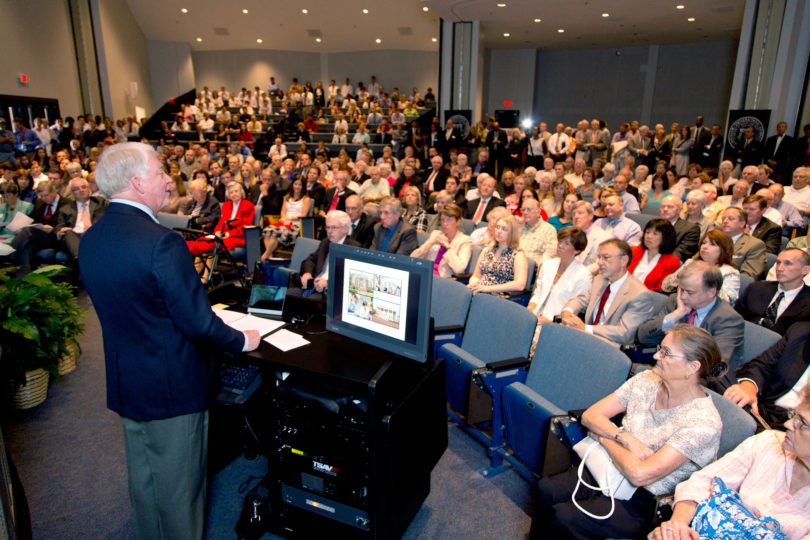 The public opening to UGA’s new Health Sciences Campus was nothing if not grand.

Hundreds of university dignitaries, students and members of the greater Athens community arrived at the newly-opened campus on Aug. 22 to get a first look at the initiative that’s expected to inject the state with hundreds of doctors and public health professionals in the coming years.

“This is one of those ceremonial days that is the culmination of a lot of dreams for a lot of people,” said UGA President Michael F. Adams to a standing-room only crowd in a renovated lecture room in George Hall.

The campus opened for fall classes Aug. 6 with two primary occupants: the College of Public Health and the Georgia Health Sciences University/UGA Medical Partnership. But the open house gave the larger community a chance to wander the halls of the newly renovated buildings.

The 56-acre site, located at Prince and Oglethorpe avenues, was once the home of the U.S. Navy Supply Corps School. During that time, the campus was not open to the public. Fences, gates and concrete barriers closed it off to the Athens community.

In spring 2011, the U.S. Department of Education deeded the site to the university. Crews have been renovating buildings for labs, patient exam rooms, classrooms and office space.

The barriers and gates are down now.

“All of this should symbolically say to all the community in Athens that you are welcome here, that you can enjoy this 56 acres as much as you enjoy the 1,800 acres of the main campus,” Adams said.

With that invitation, guests explored the halls of the buildings where restoration is complete – though much of the campus is still under renovation.

The buildings that are completed showcase a contemporary classroom setting, while in some cases still maintaining the historic character of the older buildings. Some of the furniture from the old Navy School remains. And a bulldog statue painted with a navy and white uniform stands at the ready in the quad in front of Winnie Davis Hall as a reminder of the school’s military past.

While this event was the first opportunity for Georgia residents to visit the renovated campus, those who worked to build-up public health education at UGA say the biggest benefits of the campus are still to come.

Adams said the College of Public Health and the medical partnership programs are charged “making this a healthier, better state. It’s no more complicated than that.”

U.S. Sen. Johnny Isakson (R-Ga.), a UGA alumnus who was in attendance at the opening, noted that while Georgia is home to the Centers for Disease Control and Prevention and the American Cancer Society’s headquarters, it also gets low grades on physician-to-population ratio in the U.S. and has a high rate of obesity, heart disease and diabetes.

University officials also highlighted the benefits of the campus for the Athens community and Northeast Georgia.

Dr. Peter Buckley, dean of Medical College of Georgia for the GHSU, noted that medical students already are training in Athens hospitals to the betterment of the community.