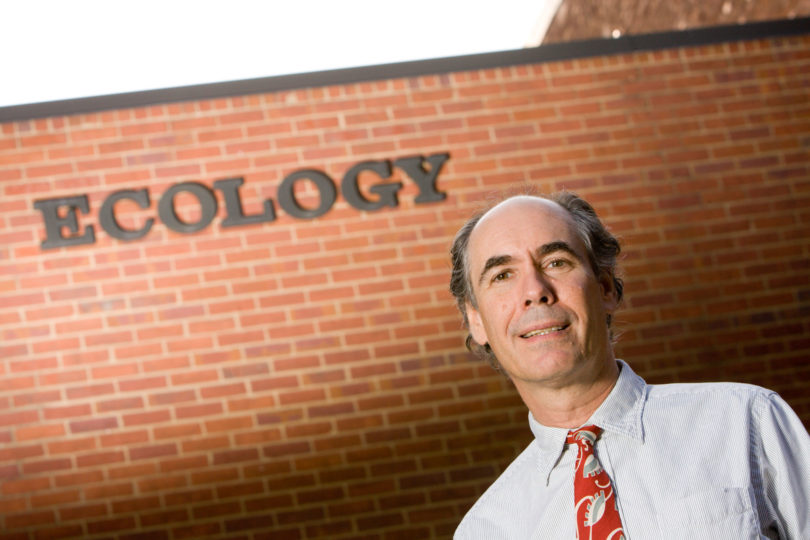 Clad in his typical attire of a long-sleeved flannel shirt, broken-in khakis and black Adidas sneakers, John Gittleman, dean of the Odum School of Ecology, is settling into his new role. He came to the former Institute of Ecology as its director and has since made the transition to dean of the first standalone school of ecology in the world.

“We at the Odum School have a very exciting opportunity to set an agenda for ecological and environmental problems around the world,” said Gittleman. “The Odum School is dedicated to identifying new questions and big ideas in ecology.”

A look around his office reveals glimpses into the man at the helm of this inaugural school of ecology. A cardboard box sits under his desk, full of paper to be recycled. A skeletal replication of the extinct saber tooth tiger rests prominently on a tabletop, a clue in to one of Gittleman’s research passions—conservation. And he speaks as easily about the love of his “girls,” yellow Labrador retrievers Maisie and Minnie, as he does about speciation, the biological term for the formation of new and distinct species in the course of evolution.

It was a love for animals that led Gittleman down the path of being an ecologist. As a child, he was fascinated in particular by mammals and began pondering questions about how they live in their environments. In his undergraduate and graduate studies, one of his primary interests was learning how plants and animals adapt to their ecosystems.

“The questions I was interested in as a college student are especially relevant today,” said Gittleman. “Studying the resistance of plants and animals to environmental changes, such as global climate change and habitat loss, is a present leading ecological issue.”

And it is this relevance for environmental matters that Gittleman believes makes a school of ecology so important today.

“Ecology is accessible­—in our own backyards live a variety of organisms and invasive plants,” said Gittleman. “And people have an awareness of pressing concerns such as global climate change, recycling and disease—issues that require greater ecological understanding.”

Gittleman wants to see the Odum School set precedents in teaching, research and the application of ecology for other universities. He hopes to see other institutions follow the University of Georgia’s lead and form other schools of ecology around the globe.

Citing Charles Darwin as an inspiration, Gittleman is dedicated to a broad, interdisciplinary approach to ecology. He likens Darwin to modern ecology pioneer Eugene Odum, citing the synthetic and inclusive nature of both men.

“One of Odum’s hallmarks was holistic ecology,” said Gittleman. “He would look at ecological problems from a variety of scientific perspectives. The Odum School looks forward to continuing its long-standing holistic tradition and collaborating with other units across campus.”

Gittleman holds bachelor’s degrees in both philosophy and psychology, with a doctorate from the University of Sussex in biology. He always has been interested in the philosophy of science and the various approaches scientists take in solving problems.

The problems in which he is most interested are of the “large-scale ecological” variety. His research focuses on conservation, speciation and the interaction between non-human species and humans.

“It is important to forecast what happens to species prone to extinction,” said Gittleman. “Because once we start to see die-off, it is often too late.”

Gittleman recently worked with other researchers and uncovered evidence that challenged the long-held belief that the extinction of dinosaurs is what made way for the success of mammals. Current research includes working on a model that will seek to predict the risk of extinction based on factors such as body size, habitat and reproduction.

“We are studying how mechanisms such as global change and invasive species affect plants and animals,” said Gittleman. “Developing a greater predictive science is essential.”

And it is this essential science of ecology about which Gittleman is so passionate. Whether talking about working on ecology’s new strategic plan or his own research interests, he is clear about the critical importance of the science itself.

“We want to acknowledge that as serious ecological problems need new approaches, the Odum School is working to come up with novel and creative ideas,” said Gittleman.