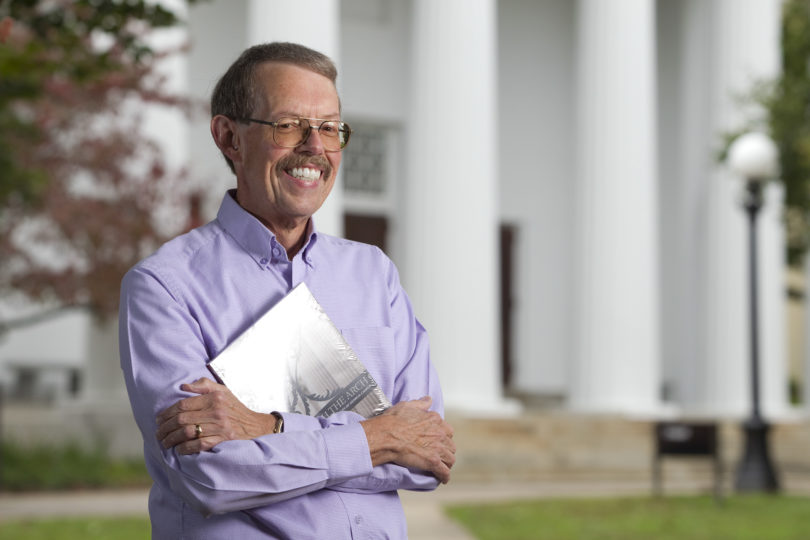 From the details of “The Big Streak” to the tale of a lion waking up sleeping students in Joe Brown Hall, Larry B. Dendy heard a lot of stories as he worked to compile some of UGA’s past.

Dendy, who held various positions in the Division of Public Affairs for 37 years, wrote Through the Arch: An Illustrated Guide to the University of Georgia Campus released in September, with a goal of informing others about the university’s rich history.

“I thought after 37 years that I knew a lot, but there was a lot I didn’t know but learned while writing the book,” Dendy said. “My hope is that this will make people-employees, students and the wider public-appreciate the university and all of its history.”

Dendy’s role in authoring the book came about after some friends at the University of Georgia Press, publisher of the book, suggested he would be a good fit.

After the initial contact, it was four years before Dendy held a physical copy of Through the Arch in his hands. To gather the information in the book, he relied on a variety of sources.

“I used a lot of websites, newspaper articles, magazine articles and books,” Dendy said. “I did not do any original research or go digging into minutes or old records; I used contemporary materials that were available to me.

“I used what my instincts as a reporter would have been-to use current information,” he also said.

Through the Arch includes profiles of some 140 campus buildings, structures and spaces, and has more than 130 photographs, many in color. It also includes additional information about UGA today, including information on academics, student programs, research and service, athletics and the university’s role in advancing the state. Dendy said the book is an attempt to present a comprehensive picture of the modern UGA in a historical context

Through the Arch includes information such as landmarks, building history and usage, along with the stories behind the individuals for whom campus buildings are named.

One of the more memorable stories Dendy heard and wrote about was that of a tamed lion taken from a private zoo and brought into Joe Brown Hall one night. The lion was kicked by one of the students, according to Dendy. That caused the lion to roar, waking up the entire building, and even causing some students to leap from windows. After its roar, the lion climbed on a student’s bed and went to sleep.

He also wrote about “The Big Streak,” which had more than 1,000 scantily dressed or nude students running across campus on a warm March night in the early 1970s.

Dendy, who will take part in a book signing Nov. 8 at 4 p.m. in Lecture Hall 125 of the Jackson Street Building, said he doesn’t envision fame or fortune from Through the Arch, but that his goal was never those two things.

“The University of Georgia is a marvelous institution with a fascinating history and obviously wonderful attributes,” he said. “I hope that is reflected in this book and that people will find in this book an inspiration to appreciate what a great institution and history we have here.”