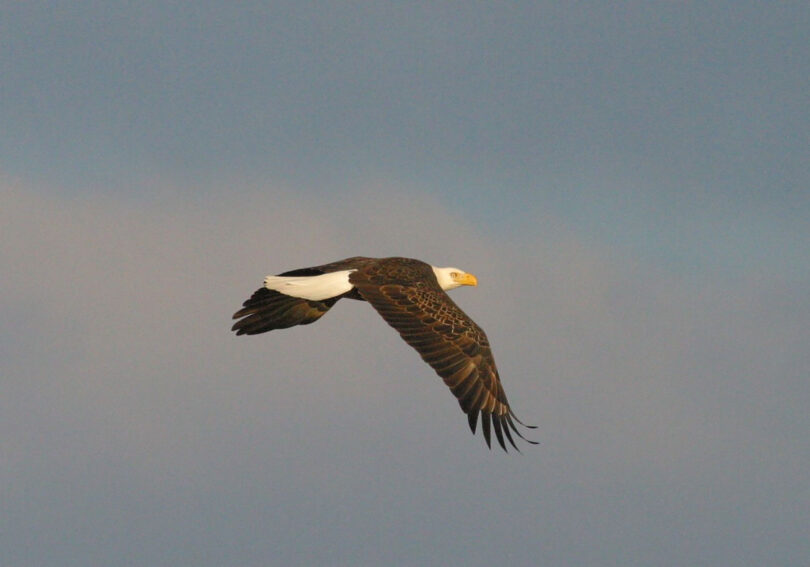 A healthy bald eagle soars through the air. (Georgia DNR)

Highly pathogenic avian influenza was confirmed in three bald eagles in Georgia Thursday. This is the first time the virus has been confirmed in the species in the state.

The University of Georgia’s Southeastern Cooperative Wildlife Diseases Study first detected the disease in the dead eagles found in Chatham, Glynn and Liberty counties in March. Based in UGA’s College of Veterinary Medicine, the cooperative provides wildlife disease expertise to state and federal fish and wildlife agencies, including the Georgia Department of Natural Resources.

The U.S. Department of Agriculture has confirmed more than 660 cases in wild birds just this year, including 11 cases in Georgia. Nationwide, tens of millions of domestic birds have also died from the disease or been culled after known exposures to keep the virus from decimating commercial flocks. The virus is considered to be a low risk to humans, and to date there have been no human cases reported in the United States, according to the Centers for Disease Control and Prevention.

Following the initial detection, samples were sent to the USDA National Veterinary Services Laboratories in Iowa for confirmation, which was received this week. 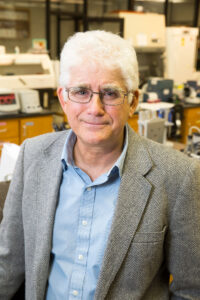 “We don’t know what the future holds, but worst case scenario: The virus becomes established in our wild bird populations,” said David Stallknecht, director of the Southeastern Cooperative Wildlife Disease Study. “If it is maintained in wild birds, it will continue to threaten wild bird and commercial poultry health. With bird migration it may even spread to Central America and South America.”

Frequently referred to as HPAI or high-path, the virus has been detected in more than 50 countries on multiple continents. It’s previously been found in commercial poultry flocks, backyard chickens and wild waterfowl and has the ability to infect other animals as well.

This year, the virus is hitting birds of prey hard. But only in certain areas.

“Raptors being infected with HPAI is not something that is unique,” Stallknecht said. “But the scale of it is absolutely unique. We have also detected it in numerous raptors in other states, and there is an outbreak going on in Florida right now involving hundreds of black vultures. Mortality due to HPAI has been documented in numerous species of geese, ducks, gulls and pelicans. However, not all infected birds die.”

Some ducks, for example, have no apparent illness when infected. That may be the result of some built-in immunity to HPAI from exposure to less pathogenic flu viruses (i.e., “low path”) that commonly occur in waterfowl.

Eagles and other raptors that eat ducks aren’t typically exposed to these low-pathogenic viruses, which may leave them more vulnerable to HPAI.

This virus is cause for concern, but it’s not cause for panic.” —Bob Sargent, Georgia Department of Natural Resources

HPAI is also likely responsible for substantial decreases in nesting success for coastal bald eagles in Georgia this season.

“On the coast, the numbers are pretty sobering,” said Bob Sargent, one of the program managers for the Georgia Department of Natural Resources. Sargent recently completed a survey of bald eagle nests in Georgia. “What we found is the nest success rate for those coastal birds was over 30% lower than it normally is. You can’t say definitively that high-path caused all those nest failures, but clearly it’s played a substantial role in that remarkably substantial drop.”

On average, about 70% to 80% of Georgia’s bald eagle nests succeed, meaning at least one eaglet fledges. (Eagles typically lay two eggs.) On one of Sargent’s routes in northeast Georgia last week, he found that number was closer to 90% for birds nesting in that region of Georgia’s interior. Overall, it appears that this year’s success rate for the more than 150 nests not located in the six coastal counties will be at least 70%—a normal year.

Over the past few decades, the U.S. bald eagle population has made a remarkable recovery. In the 1960s through the 1970s, the U.S. had fewer than 500 nesting pairs of bald eagles in the Lower 48. Georgia didn’t have a single successful bald eagle nest in the state from 1971 through 1980. Now, the population in the Lower 48 has soared to more than 315,000 birds, and there are more than 200 nesting pairs in Georgia.

If you see a sick or dead eagle that doesn’t appear to have been injured, contact the Department of Natural Resources.

“We are hoping that this will run its course without doing too much damage here in Georgia,” said Tina Johannsen, assistant chief of game management for the Georgia Department of Natural Resources. “This particular disease kills a lot of birds really quickly if they get it. We appreciate the public being our eyes and ears out there, particularly in remote areas.

“If you see something that seems unusual, particularly if it’s more than one dead bird in a location, don’t handle it. Call us, and we can give you advice on the best thing to do for it.”