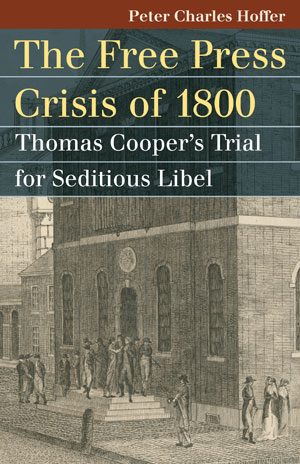 Peter Charles Hoffer, Distinguished Research Professor of History at UGA, has written The Free Press Crisis of 1800: Thomas Coop­er’s Trial for Seditious Libel, an authoritative review on a landmark case examining the freedom of the press.

Cooper’s trial became an important showcase for debating the dangers and limits of the Sedition Act of 1798, which imposed fines and imprisonment “if any person shall write, print, utter or publish. . . scandalous and malicious writing or writings against the government of the United States.” Such a broadly and loosely defined offense challenged the freedom of the American press and gave the government the power to drag offending newspaper editors into court.

While most modern students of the Sedition Act regard it as an extreme measure motivated by partisan malice, Hoffer offers a much more nuanced view that weighs all the arguments and fairly considers the position of each side in historical and legal context. He brings both sides of the trial to life.