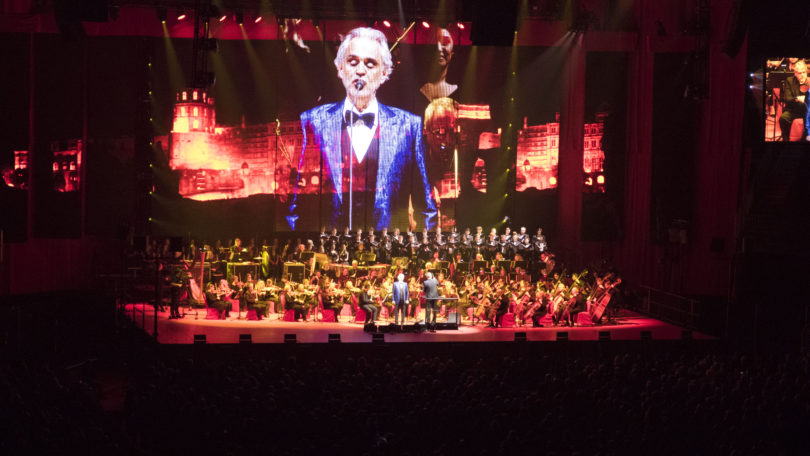 The Hodgson Singers, who recently performed with Andrea Bocelli at a concert in Atlanta, will take the stage for a Thursday Scholarship Series performance on March 5. (Photo by Camille Hayes)

The University of Georgia’s premier choral ensemble will perform in the Hugh Hodgson School of Music Thursday Scholarship Series on March 5 at 7:30 p.m. in Hodgson Hall. The UGA Hodgson Singers feature the university’s best undergraduate singers.

“It’s a program that explores themes of life’s culminations and endings, while celebrating the constancy and nobility of the natural world and creation,” said Daniel Bara, the John D. Boyd UGA Foundation Professor of Choral Music and the director of choral activities.

The program is made up of texts that are both sacred and secular, with many pieces written recently. The final piece by Benjamin Dawson, the UGA Hodgson Singers student composer-in-residence, will be premiered, as well as works by Howard Hanson and Ralph Vaughan Williams.  The program features recently composed works by Pulitzer Prize-winning composer Caroline Shaw as well as works by other notable living American composers Jake Runestad, Shawn Kirchner, Jocelyn Hagen and Matthew Hazzard. A particularly poignant part of the concert will feature choral transcriptions of three iconic and profound post-romantic solo songs by Richard Strauss, Claude Debussy and Gustav Mahler, arranged by Stanley Hoffman, and each featuring Carlos Varela, current DMA piano student.

“I’m excited about the program’s timeless textual themes—mankind’s understanding of life’s purpose and the mystery of life’s end—that are expressed in music from different time periods and styles,” said Bara.

The concert is one of only two solo concerts that the UGA Hodgson Singers give each year in Hodgson Hall.

“These singers’ commitment to choral artistry and to preparing programs that are characterized by their technical finesse, emotional poignancy and their desire to connect emotionally with the audience,” Bara said.

Much of the music on this concert will be recorded professionally for a commercial CD release next year on Gothic Records, the group’s second collaboration with them. The Hodgson Singers also recently performed with Andrea Bocelli in a concert in Atlanta.

Tickets for the concert are $20 for adults or $3 for UGA students and are available at pac.uga.edu. Live streaming will be available at music.uga.edu/live-streaming.