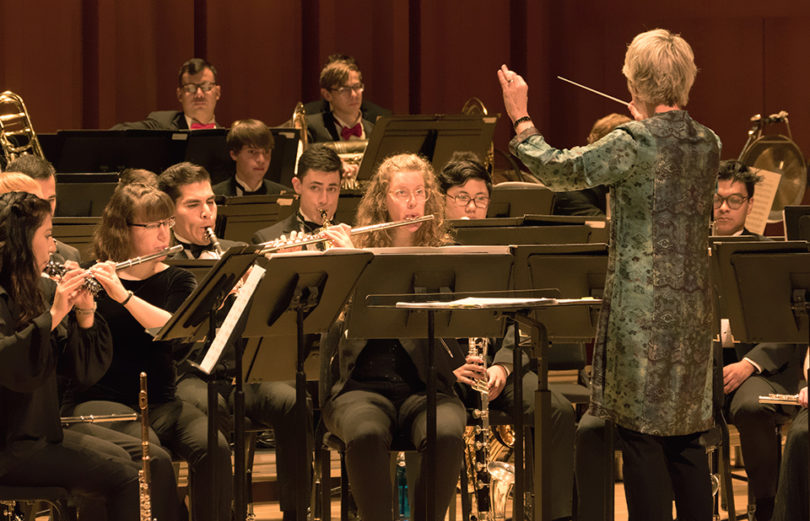 Cynthia Johnston Turner, director of bands, will lead the Hodgson Wind Ensemble in its next concert on Feb. 25 at 7:30 p.m. in Hodgson Hall. (Submitted photo)

The Hugh Hodgson School of Music Ensemble Series continues with the award-winning Hodgson Wind Ensemble on Feb. 25 at 7:30 p.m. in Hodgson Hall featuring works by Yurko, Stravinsky and Mozart.

The Hodgson Wind Ensemble, under the baton of Cynthia Johnston Turner, director of bands, and graduate conductors Andrew Blair, Emily Eng and David Stanley, will begin the program with Bruce Yurko’s “Intrada.”

“Written in a C Locrian mode, which is pretty unusual, gives the music a mood-shifting quality,” Johnston Turner said. “It’s an exciting way to open a concert with its grandiose and angular melodic fragments that give and take against each other.”

The program continues with Igor Stravinsky’s “Symphonies of Wind Instruments,” which he wrote as a kind of ritual offering to one of his mentors, Claude Debussy, who died in 1918. Rather than a symphony in the traditional ways (form, duration, harmonic motion), Stravinsky went back to the word’s ancient connotation of groups of instruments “sounding together.”

“He described it as ‘a grand chant; an objective cry.’ It’s kind of an emotional roller coaster,” said Johnston Turner.

The “Gran Partita” is a symphony, Serenade No. 10 for winds by Wolfgang Amadeus Mozart.

Seven movements use traditional forms, interspersed with some unusual elements.

“It is okay to clap when you feel like it,” said Blair. “There are too many exciting moments to wait until the very end.”