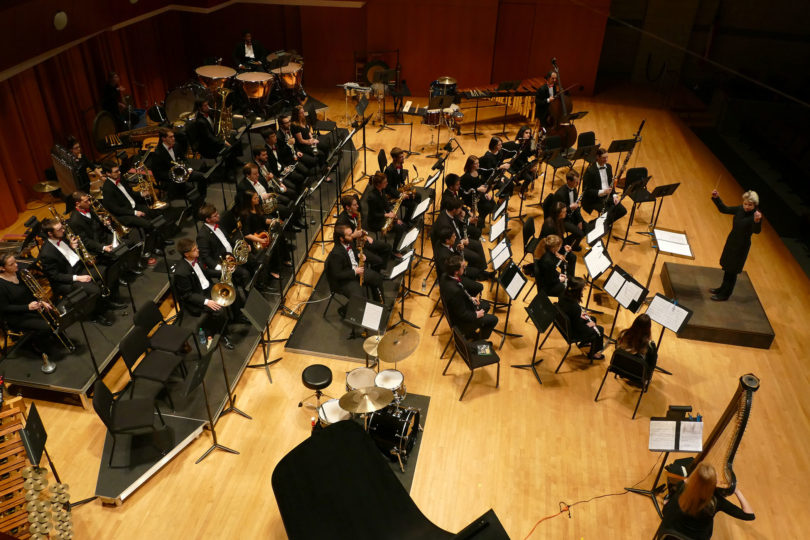 The Hugh Hodgson School of Music’s first major concert of the 2017-2018 season evokes fire and ice in a Hodgson Wind Ensemble performance Sept. 1 at 8 p.m.

Led by director of bands Cynthia Johnston Turner, the Hodgson School’s premier wind ensemble is no stranger to adventurous, evocative works, but this concert’s program is particularly ambitious.

“The concert is a narrative from heat to ice,” said Johnston Turner.

To pursue this concept, the concert opens with Figures Sonores by Dutch composer Henk Badings. Johnston Turner said this “sets up the ‘everyman/woman’ ” and establishes the main character of the concert.

The concert concludes with John Mackey’s Frozen Cathedral, described by Johnston Turner as “immense … a piece that needs to be experienced to be believed.” Expressing the all-encompassing nature of the calamity that awaits the concert’s protagonist, the piece places musicians on all sides of the audience.

The concert also continues the Hodgson Wind Ensemble’s trend of mid-concert social media engagement. Concert attendees in designated balcony “Tweet Seats” and online viewers—the concert will be streamed live at music.uga.edu/streaming—are encouraged to join an online discussion of the concert curated by conducting-area graduate teaching assistants by using the #HWELive hashtag on Twitter.

Admission to the concert is free, but attendees are encouraged to bring a nonperishable food item to donate to the UGA Student Food Pantry. Information about the pantry’s mission and the specific items it needs can be found at ugapantry.weebly.com.

To view the performance calendar, subscribe to the weekly email concert listing and learn more about the School of Music, go to music.uga.edu.