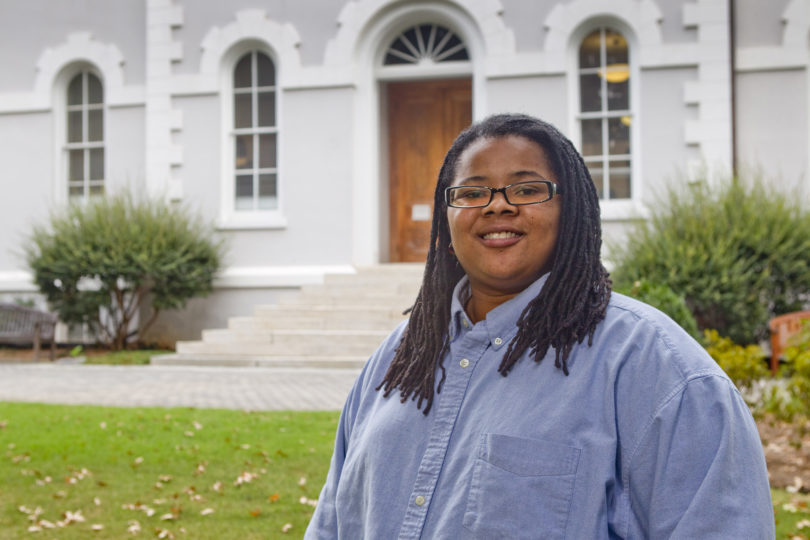 Ricky Roberts likes to tackle things that others say are not possible. So in 2012 as cities across the world were preparing an LGBT civil rights march, she wanted Athens to host one despite concerns from other local activists who said no one would come out to demonstrate.

“I felt that if only 10 people came out, I would be fine with that,” Roberts said, “and then 75 people came out and marched through the streets of Athens, and it was awesome.

“It was a very monumental thing for Athens to represent like that,” she also said. “People said it couldn’t be done, but it happened.”

Roberts, an academic adviser in the Honors Program, was one of four recipients of the 2015 President’s Fulfilling the Dream Award. She received the award in January as part of the 12th annual Martin Luther King Jr. Freedom Breakfast for her efforts working for fairness and equality for all.

“Still now, when I think about it, I’m amazed that somebody thought enough of my work to recognize me,” Roberts said. “I got to share the award with the other people who were nominated like (Lemuel “Life” LaRoche) and Joan Prittie; they’ve been doing this work for so many years, and I’ve really only been in the community working for five years.”

Roberts, a first-generation college student from Michigan who has worked at UGA for five years, said she’s always been drawn to social justice. While her passion for activism came out as an undergraduate at the University of Detroit Mercy, Roberts said she didn’t hit her stride until she came to the Classic City.

Roberts is actively involved in several local organizations that promote equality for the lesbian, gay, bisexual and transgender population, and she wrote the original proposal for domestic partner benefits at UGA, which was passed by the University Council in 2012. She is a board member for Georgia Equality, Athens Pride, the Common Ground LGBT Community Center and UGA’s Black Faculty and Staff Organization.

“People in Athens have really welcomed me in the community and let me spread my wings and be a budding activist,” she said. “I’m happy that I’ve grown into the activist I’ve always wanted to be while here.”

Roberts also performs hip-hop music as Ricky Simone. The music is one way that Roberts furthers her activism.

“It is alternative hip-hop and gives people who want to listen to hip-hop without all the cursing, negativity and disrespect to women a chance to,” she said. “It lets me get my message out there—a message of love and unity.”

Roberts also speaks and performs across the country. Her big message is that oppressed communities should stick together.

“The future of the LGBT civil rights movement depends on us effectively building coalitions with other communities,” she said. “I feel like we do a really good job of asking other people to be our allies, but we don’t do enough to reach out and be allies to other groups.”

Roberts feels that the lesbian, gay, bisexual and transgender community has to be supportive of anyone who comes under attack for who they are. She said that the community cannot just think about itself and must have empathy for others and their struggles.

“Oppression is oppression no matter who it’s directed at,” she said. “We need to stop discrimination, period.”

Roberts said she plans to continue working in Athens and throughout the country to promote equality. Currently, she is working on securing plans and funding for the Common Ground LGBT Community Center, something about which she is “very passionate.” A benefit concert for the project will be held April 4 at 8 p.m. at Hendershot’s Coffee in Athens.

While she’s been able to tackle a variety of things during her time in Athens, Roberts urges anyone who wants to become an activist to “just start.”

“A lot of people think things are so big and there are so many problems, but you just need to pick something you’re really passionate about, do something and don’t feel like you have to solve every problem,” she said. “People feel like one person can’t make a difference, but one person can change the world.”