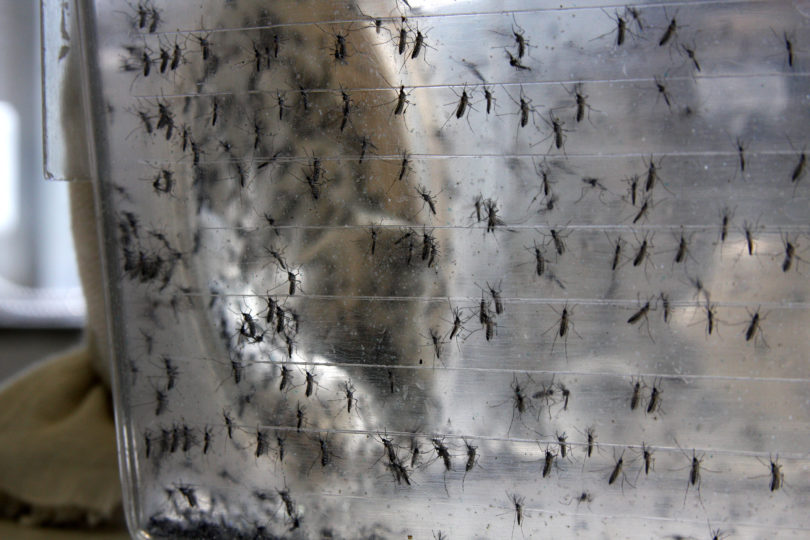 Athens, Ga. – University of Georgia entomologists have unlocked one of the hormonal mechanisms that allow mosquitoes to produce eggs.

The results provide insight into how reproduction is regulated in female mosquitoes, which transmit agents that cause malaria and other diseases in humans and domestic animals. Their work was published in the April edition of the Proceedings of the National Academy of Sciences.

The model for this research is the yellow fever mosquito, Aedes aegypti. Females have to consume a blood meal before they are able to produce a batch of eggs. The blood meal triggers the mosquito’s brain to release two hormones, an insulin-like peptide known as ILP and an ovary ecdysteroid-ogenic hormone known as OEH, which activate processes in the female mosquito that result in mature eggs.

Many hormones, including OEH and ILP, act through receptors on the surface of cells. In 2008, study co-authors Mark Brown, a professor of entomology, and Michael Strand, a Regent’s Professor, characterized the receptor for ILP in mosquitoes, which helped reveal many details about its role in egg formation. OEH plays an equally important role in female reproduction, but its receptor was more difficult to identify.

“From previous work, we knew that the fruit fly Drosophila melanogaster does not produce OEH. A different group of fruit flies, including Drosophila mojavensis—as well as all mosquitoes we had genomes for—do have OEH,” said the study’s lead author Kevin Vogel, a postdoctoral fellow also in the College of Agricultural and Environmental Sciences’ entomology department.

“Most hormones bind a single receptor, so we hypothesized that an OEH receptor should be found in mosquito genomes as well as Drosophila mojavensis, but not in the genome of Drosophila melanogaster.”

By identifying and comparing the sequences of more than 400 receptors in the genomes of two fruit flies and three mosquito species, they identified a single gene for a receptor with an unknown function within the species distribution they expected.

By targeting the gene encoding the receptor, the authors found that disabling its expression inhibited the mosquitoes’ ability to produce eggs after a blood meal.

“This receptor fills a major gap in our understanding of the regulation of mosquito reproduction,” Strand said. “Going forward, we are well positioned to better characterize the steps leading to egg production and potentially identify points at which we can disrupt reproduction and control mosquito populations.”

For more information on the UGA department of entomology, see www.ent.uga.edu.