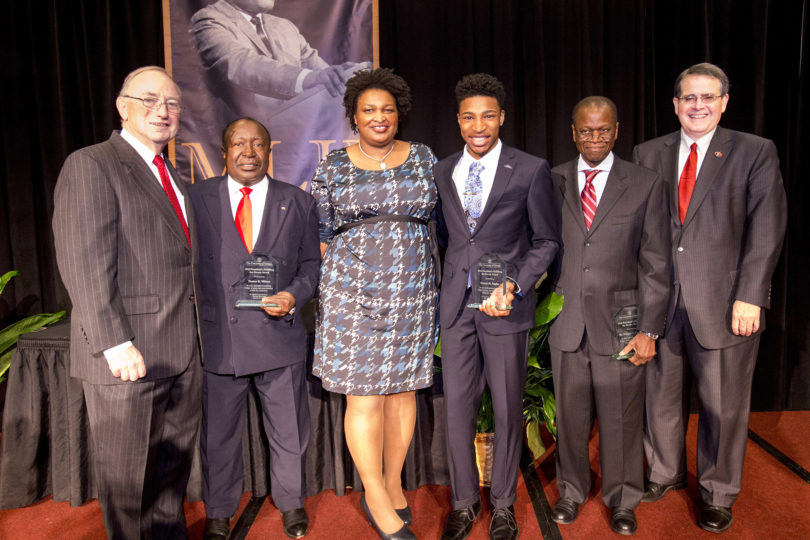 The long march to equality and justice happens through a slow but steady progress or “one step at a time.” That was the message from Stacey Y. Abrams, House minority leader for the Georgia General Assembly, at the 13th annual Martin Luther King Jr. Freedom Breakfast Jan. 22.

The breakfast commemorates the life of the late civil rights leader and honors the exemplary community service work of individuals in Athens and the university community. The event, held at the Grand Hall of the Tate Student Center, is sponsored by UGA, the Athens-Clarke County Unified Government and the Clarke County School District.

Keynote speaker Abrams, the first woman to lead either party in the Georgia General Assembly and the first African-American to lead the House of Representatives, said King understood that progress in civil rights happens in increments.

“In an age of current and instant action, of devices that can find answers in a millisecond, ‘one step at a time’ sounds like an act of cowardice,” she said. “And yet the power of America is founded exactly in such a strategy. Dr. King knew we couldn’t solve all of the evils of racism and neglect in a single burst of human kindness or contrition.”

But despite the progress made since King’s death, America could backslide if there is not a continuously renewed commitment to keep pushing for inclusion and understanding.

At the breakfast, UGA recognized three people who were taking steps to promote equality and justice.

William Kisaalita, a professor in the College of Engineering; Homer Wilson, owner of Wilson’s Styling Shop; and Darren Anglin, a senior from Covington, received the President’s Fulfilling the Dream Award for their efforts to build bridges of unity and understanding as they strive to make King’s dream of equality and justice a reality.

Kisaalita, who was born in Uganda, developed a milk cooler designed to help dairy farmers, particularly those in sub-Saharan Africa who lack access to refrigeration. The coolers decrease milk spoilage thereby increasing production and profits. His goal is to increase income among those earning less than $5 a day.

Anglin is senior majoring in advertising with a minor in consumer economics and communications. He mentors more than 20 Athens-Clarke County middle and high school students in the Sigma Beta Club, and he created a temporary organization to raise $1,000 in scholarships for local minority students.

The late Richard M. Graham, the first full-time African-American faculty member at UGA, also was recognized at the breakfast. Graham, who died in May, was a former director of the Hugh Hodgson School of Music, which is part of the university’s Franklin College of Arts and Sciences. He retired from the university in 2000.