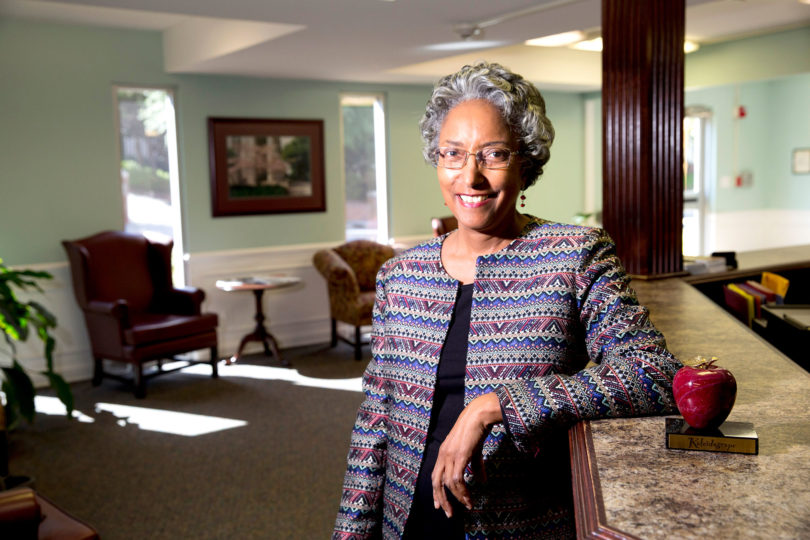 Patrice Masterson's work in human resources is meant to help others realize their own leadership potential.

Vision oriented. Insightful. Critical. Decisive. These are all traits that characterize the INTJ type as determined by the iconic Myers-Briggs Type Indicator personality test. For Patrice Masterson, that personality type isn’t just a combination of four letters; it’s an insight into her strengths and weaknesses in her role as a leader in higher education.

Masterson may be new to UGA, stepping into her role as assistant director for benefits in Human Resources in January, but by no means does she lack experience. After working for Hewlett-Packard Co. and developing a staff training program in her HR role at Quinsigamond Community College in Worcester, Massachusetts, Masterson headed south, landing at Georgia Perimeter College. She served as the college’s HR director for staff development and benefits for more than 20 years. When she learned that Georgia Perimeter was consolidating with Georgia State University, Masterson decided it was time for a change.

Her role at UGA is similar to the one she held at Georgia Perimeter, but everything is on a much larger scale, she said. Working with a staff of 12 people, she spends most days discussing retirement planning, new hire benefits, and leave and disability information with UGA employees and retirees.

A career in human resources means constantly dealing with people to address their needs and concerns, something Masterson was always drawn to do. After teaching an introductory sociology course at Quinsigamond, Masterson realized she could incorporate some basic sociological concepts into training programs for the college’s faculty and staff. She quickly discovered that she had a knack for leadership development and for helping people realize their potential. Jacquelyn Belcher, president of Georgia Perimeter, encouraged Masterson to join a new leadership development program she created to help women of color advance in higher education.

Masterson has been a faculty member at the Kaleidoscope Leadership Institute ever since. The institute culminates in an annual four-day program that brings together 50 women from across the nation to discuss their experiences as women of color working in higher education and helps them develop their leadership skills through workshops and lectures by guest speakers.

The institute offers participants an opportunity to get to know themselves better through feedback from peers and career counselors that people often don’t get in the workplace, Masterson said. She knows firsthand how empowering that kind of information can be, having attended a “life-changing” conference at the Center for Creative Leadership in North Carolina years ago.

“What I learned about myself from those assessments was really powerful for me,” she said. “It gave me a lot more confidence and allowed me to trust myself more and also not be afraid to use my voice. I was different after that.”

Now her goal at UGA is to work well with her team as they help others utilize the USG/UGA benefits programs in the ways that are most useful to them. If she helps someone realize their leadership potential along the way, that’s an added benefit.