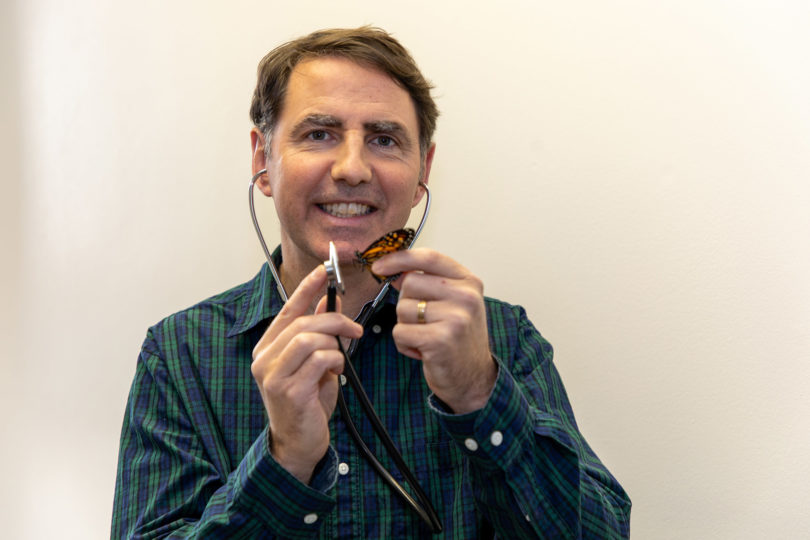 These activities can provide valuable scientific data and educational benefits for the people participating in them. But how do the monarchs themselves feel about being handled by humans?

The answer, according to a new study from University of Georgia ecologist Andy Davis, depends on their life stage: Being handled is stressful to them but only in their early life.

“Most people don’t realize that insects get stressed in much the same way as vertebrates do,” said Davis, an assistant research scientist in the Odum School of Ecology. “People handle monarchs for all of these activities, but if you imagine yourself in their place, what would it be like for us if a 50-foot-tall robot picked us up and passed us around? From the monarch’s perspective, maybe for them this is akin to being attacked by a predator.”

Stress reactions in insects include elevated heart rates, which are part of the fight-or-flight response triggered by predators—or perceived predators—so Davis designed a series of experiments to find out whether the heart rates of monarchs rose after handling.

Because they are subject to human contact at all life stages—larval, pupal and adult—he measured the heart rates of caterpillars, chrysalises and butterflies before and after short periods of gentle handling.

Davis first looked at caterpillars under a microscope, and counted how fast their hearts beat before handling. Then he gently passed the caterpillar from hand to hand for three minutes and observed its heart rate again.

The procedure was similar for adult butterflies, which Davis netted during fall migration. Within 30 seconds of catching each one, he held it carefully under a microscope to observe its heart beats. He then simulated the procedure for tagging them and measured their heart rates again.

Measuring the heart rates of monarch pupae required a different approach. Because they are encased in a chrysalis, their heart beats can’t be observed under a microscope. Davis instead used an electronic device that could remotely detect heart movement inside the chrysalis and provide a readout to his computer.

Making the process even more complicated was the unusual cardiac function of monarch pupae.

“At the pupal stage, their hearts beat in a weird way,” Davis said. “The heart will beat for about 15 minutes and then stop for up to two hours; it flatlines.”

The monarch heart also reacts very quickly to disturbance, so he gently prodded or jostled the chrysalises for 20 seconds and recorded their heart rates for the next minute using the electronic device.

He found that handling did indeed have an effect on heart rates at the two early stages of life. Caterpillars experienced an approximately 20% increase above their baseline heart rate, and pupal heart rates shot from zero to 88 beats per minute—which is almost three times higher than the typical active beating rate for pupae as reported in earlier research.

The heart rates of adult butterflies, however, showed no significant change after handling. This could mean either that the experiment didn’t capture the adult butterflies’ stress reaction or that gentle handling doesn’t cause them stress.

“It kind of makes sense that adult monarchs would be fairly stress-tolerant,” he said. “The migration itself is fraught with dangers and perils along the way, and for a monarch to be able to accomplish that, it has to be able to deal with a wide variety of natural stressors.”

Davis said that just because larvae and pupae seem prone to stress reactions from handling, the study shouldn’t be interpreted to mean that people shouldn’t work with monarchs.

“These results don’t mean people should stop important activities like research and outreach,” he said. “But the results should at least make us more cognizant about how the monarch is feeling about being handled. In other words, we shouldn’t kid ourselves by thinking the monarchs are OK with it.”

The paper, “Evaluating cardiac reactions of monarch butterflies to human handling across three life stages,” appears in the spring 2020 issue of the Journal of the Lepidopterists’ Society at https://bioone.org/journals/The-Journal-of-the-Lepidopterists-Society/volume-74/issue-1/lepi.74i1.a5/Evaluating-Cardiac-Reactions-of-Monarch-Butterflies-to-Human-Handling-across/10.18473/lepi.74i1.a5.short