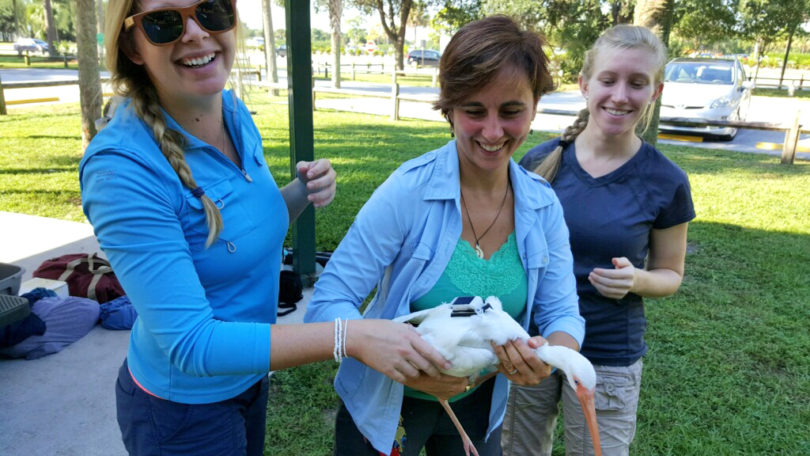 UGA to use $2.1 million grant to study effects of feeding wildlife at public parks

Athens, Ga. – People feeding white ibises at public parks are turning the normally independent birds into beggars, and now researchers at the University of Georgia say it might also be helping spread disease.

They recently launched a study to find out how being fed by humans is changing the health, ecology and behavior of white ibises in south Florida, where construction and land development is drying up their wetland habitats.

The birds normally feed on aquatic animals like fish, snails and crayfish, but they are now becoming accustomed to being fed items such as bread, fast food and popcorn by people at parks, said Sonia Hernandez, an associate professor with joint appointments in UGA’s Warnell School of Forestry and Natural Resources and College of Veterinary Medicine.

This shift in feeding behavior could have serious consequences not just for the white ibises, she said, but also to people.

“In a previous study, and using molecular typing methods, we found that the strains of salmonella bacteria that white ibises are infected with are the same that some people get sick from, particularly in Florida,” Hernandez said. “Because white ibises move from urban to natural environments readily, they might be responsible for moving these strains around over large distances.”

Hernandez is working with other UGA researchers on the five-year, $2.1 million project, funded by the National Science Foundation’s Ecology and Evolution of Infectious Diseases Program. Their findings could apply to other wildlife species that have grown cozy with humans at public parks and other human-altered landscapes, she said.

The white ibis is most commonly found in Florida, although it can be spotted along the Atlantic coast as far north as North Carolina and on the Gulf Coast as far as Louisiana. They are normally nomadic, can travel for miles every day and typically spend much of their day searching for food.

But why expend energy searching for food when humans at public parks will give it to them, Altizer said. “If white ibises have a reliable food source, they might form larger flocks that stay put year-round near the parks.”

This shift toward more sedentary behavior could allow pathogens transmitted through feces, like salmonella, to build up and pose risks for both birds and humans.

Greater numbers of ibises in urban parks also puts them contact with animals they wouldn’t normally meet in natural environments, like muscovy and mallard ducks, gulls and other common city birds—all reservoirs of diseases for birds.

As part of the project, the researchers will focus on white ibises in Palm Beach County, Florida, where Hernandez has been conducting field monitoring of the birds since 2010. The research site will span six urban and six natural areas in the county, and researchers will conduct field sampling of white ibises on a quarterly basis for two years to accurately estimate the birds’ population size.

Researchers are focusing on salmonella because it causes one of the most significant diarrheal diseases for people and can cause mortality in young wading birds.

“GPS technology is not just for humans anymore,” Hepinstall-Cymerman said. “We can now get up to 12 locations a day and for up to two years to understand how birds we capture at urban sites behave compared to birds caught at natural sites.”

If urban birds are roosting with birds that primarily use natural sites, diseases originating in urban areas could be spread throughout the white ibis population in Florida, he said. It doesn’t help that urbanized white ibises might also have weaker immune systems—most likely caused by contact with people, poor diets and stress from living in less-than-optimal environments.

“In fact, we are finding that urban ibises have extremely high levels of stress hormones and weak immune systems compared with other birds,” Navara said. “Ultimately, this could affect how pathogens, including salmonella, are being transmitted among individuals and between the birds and humans.”

Hall said it’s understandable that people would feed the friendly looking birds they see in parks—and it’s done with the best of intentions. However, researchers hope this project will raise awareness about how “helping” wildlife by feeding them can have unintended harmful effects.

“We also hope that these studies will inform good practices by which people can continue to enjoy encounters with wildlife in their backyards and cities, for example by developing good practices for bird feeder hygiene, what kinds of food to provide and knowing when to put up—and take down—feeders,” Hall said.