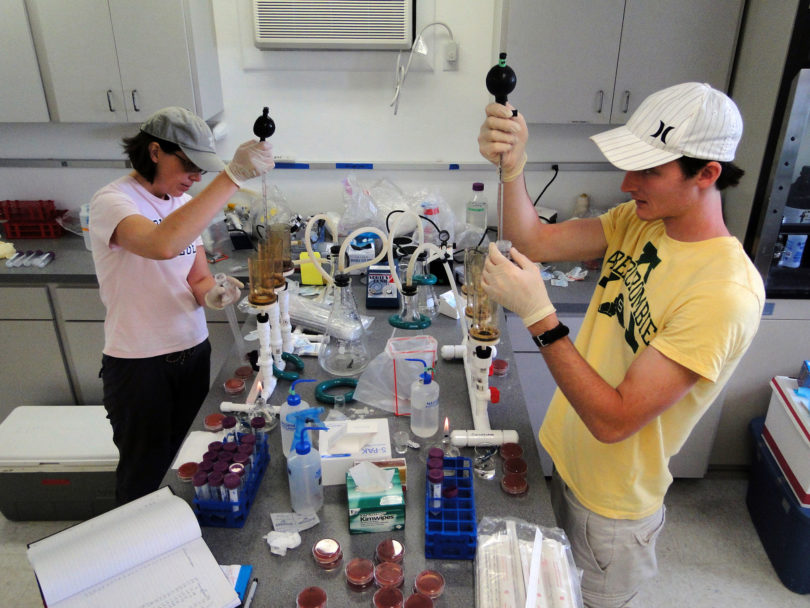 Winter Park, Fl. and Athens, Ga. – A research team from Rollins College in Florida and the University of Georgia has identified human sewage as the source of the coral-killing pathogen that causes white pox disease of Caribbean elkhorn coral. Once the most common coral in the Caribbean, elkhorn coral was listed for protection under the United States Endangered Species Act in 2006, largely due to white pox disease. The team’s findings have just been published in the peer-reviewed open access journal PLoS ONE.

Kathryn P. Sutherland, associate professor of biology at Rollins College, and her research collaborators, Associate Professor of Environmental Health Science Erin K. Lipp and Professor of Ecology James W. Porter of the University of Georgia, have known since 2002 that the bacterium that killed coral was the same species as found in humans. “When we identified Serratia marcescens as the cause of white pox, we could only speculate that human waste was the source of the pathogen because the bacterium is also found in the waste of other animals,” Sutherland said.

In order to determine a source for the pathogen, the research team collected and analyzed human samples from the wastewater treatment facility in Key West and samples from several other animals, such as Key deer and seagulls. While Serratia marcescens was found in these other animals, genetic analyses showed that only the strain from human sewage matched the strain found in white pox diseased corals on the reef. The final piece of the investigative puzzle was to show that this unique strain was pathogenic to corals.

With funding from Florida’s Mote Marine Laboratory “Protect Our Reefs” grant program, Sutherland, Lipp and Porter conducted challenge experiments by inoculating fragments of coral with the strain found in both humans and corals to see if it would cause disease. The experiments were carried out in a laboratory in closed seawater tanks to eliminate any risk of infection to wild populations of corals.

“The strain caused disease in elkhorn coral in five days, so we now have definitive evidence that humans are a source of the pathogen that causes this devastating disease of corals,” Sutherland said.

“These bacteria do not come from the ocean, they come from us,” said Porter. Water-related activities in the Florida Keys generate more than $3 billion a year for Florida and the local economy. “We are killing the goose that lays the golden egg, and we’ve got the smoking gun to prove it,” Porter said.

Serratia marcescens is also a pathogen of humans, causing respiratory, wound and urinary tract infections, meningitis, and pneumonia. Human diseases caused by this bacterium are most often associated with hospital-acquired infections of newborn infants and immune-compromised adults. This research reveals a new disease pathway, from humans to wildlife, which is the opposite of the traditional wildlife-to-human disease transmission model. The movement of pathogens from wildlife to humans is well documented-for example, bird flu or HIV-but the movement of disease-causing microbes from humans to marine invertebrates has never been shown before. This is the first time that a human disease has been shown to cause population declines of a marine invertebrate.

“Bacteria from humans kill corals-that’s the bad news,” said Porter. “But the good news is that we can solve this problem with advanced wastewater treatment facilities,” like one recently completed in Key West. “This problem is not like hurricanes, which we can’t control. We can do something about this one,” he said. The entire Florida Keys is in the process of upgrading local wastewater treatment plants, and these measures will eliminate this source of the bacterium.

The Rollins College and University of Georgia collaborative research group is currently funded by a $2.2 million grant from the National Science Foundation to investigate the ecology of white pox disease in the Florida Keys. The five-year study will focus on mechanisms of transmission of the coral pathogen and the factors that drive the emergence and maintenance of white pox outbreaks, including water quality, climate variability and patterns of human population density. “We are concerned that disease incidence or severity may increase with rising temperatures,” Lipp said, “reinforcing the importance of protecting near-shore water quality in a changing climate.”

Besides Sutherland, Porter and Lipp, the study’s co-authors were Sameera Shaban of Rollins College and Jessica L. Joyner of UGA. The article is available online at http://dx.plos.org/10.1371/journal.pone.0023468.