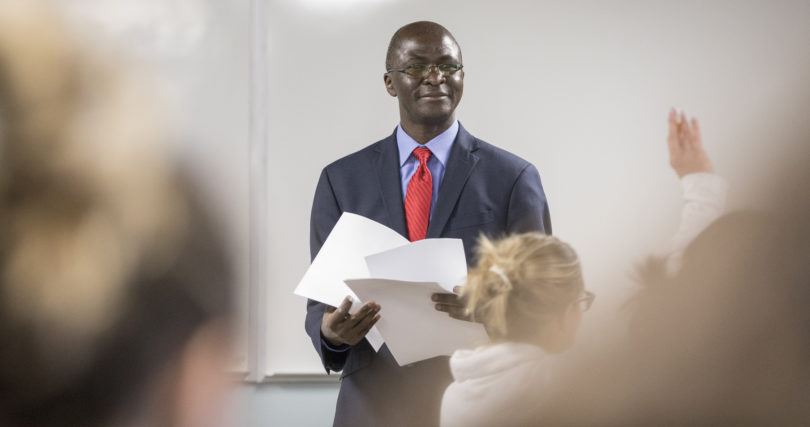 David Okech in the classroom. (Photo by Peter Frey/UGA)

The 13 men were promised jobs, food and lodging. Instead, they were paid little or nothing, housed in deplorable conditions and provided scant food. If they complained or spoke of leaving, their employer threatened to have them deported.

The incident happened in Georgia in 2018. In July 2019 the men—guest agricultural workers on H-2A temporary work visas—won a lawsuit against their employer for violations of federal human trafficking law. The law prohibits involuntary servitude or the use of fraud, force or coercion to recruit or subject individuals to involuntary servitude.

According to the National Human Trafficking Hotline, in 2018 Georgia had the seventh highest number of human trafficking cases in the U.S., including both sex and labor trafficking victims.

David Okech, an associate professor in the University of Georgia School of Social Work, is a member of a section of the Georgia Governor’s Human Trafficking Task Force that focuses on the plight of foreign-born adult victims of labor trafficking. Okech also leads the African Programming and Research Initiative to End Slavery (APRIES), which is funded by the State Department’s Office to Combat and Monitor Trafficking in Persons. The international project is collecting data on child trafficking in parts of West Africa to aid intervention efforts and reintegration programs for survivors.

Which has more victims in Georgia—sex trafficking or other forms of human trafficking?
We don’t really know. Currently, there is minimal available data on labor trafficking in Georgia, and the cases of labor trafficking seem to be either unreported, under-reported, or handled on an ad hoc basis. Ideally, the final report will deepen our understanding of labor trafficking, help improve our response to incidents of victimization, and provide support for the establishment of a permanent system in Georgia to monitor and address exploitative labor situations that could potentially evolve into labor trafficking.

What are the challenges to getting good data on human trafficking?
Trafficking victims are a hard-to-reach population. Without baseline data, it is difficult to measure the problem, which makes it difficult to know if any interventions are effective.

What are the other challenges for a researcher?
Developing an appropriate methodology. There does not yet exist a proven methodology or sampling approach that will reliably measure baseline data, making establishing an effective program a major challenge.

In West Africa, where APRIES is collecting data on the prevalence of human trafficking, we seek to involve all partners in the research process and recognize the unique strengths of each community partner, such as hospitals, churches or social service agencies. We initially collect qualitative data—non-numerical, observational information—from in-depth interviews with survivors as well as focus groups with community stakeholders, analyze the information, and use the findings to develop a quantitative household survey. The household survey collects quantitative data for trafficking prevalence estimates. This mixed methodology is a promising approach in collecting baseline data and identifying service gaps, because it goes beyond just the numbers and builds on community resources and strengths.

How does human trafficking differ between the U.S. and most of sub-Saharan Africa?
Trafficking in developed counties has one commonality—exploitation by someone who manipulates or coerces someone for profit. In Georgia, a young person who is being trafficked for sex might dress less appropriately, have unexplained absences from class, extra money or expensive accessories; provide rehearsed responses to questions, be withdrawn or distracted.

However, all these signs might not translate directly into a West African context. For example, in Guinea impoverished girls may leave school voluntarily to help at home if both parents are incapacitated, so absences from class would not necessarily indicate human trafficking.

In West Africa a young person is more likely to be trafficked primarily for labor, which actually is estimated to be more prevalent worldwide than sex trafficking. In both the U.S. and sub-Saharan Africa a person who is labor-trafficked may appear malnourished or exhausted, show signs of physical injuries and abuse, avoid eye contact or be fearful.

What can the average person do to help reduce human trafficking?
Be informed and look for the signs of trafficking. There are many numbers to call, including the federal anti-trafficking hotline 1-866-347-2423. More information can be found at www.dhs.gov/blue-campaign and law.georgia.gov/key-issues/human-trafficking. Trafficking is nearly everywhere, but if you are proactive you could save a life.