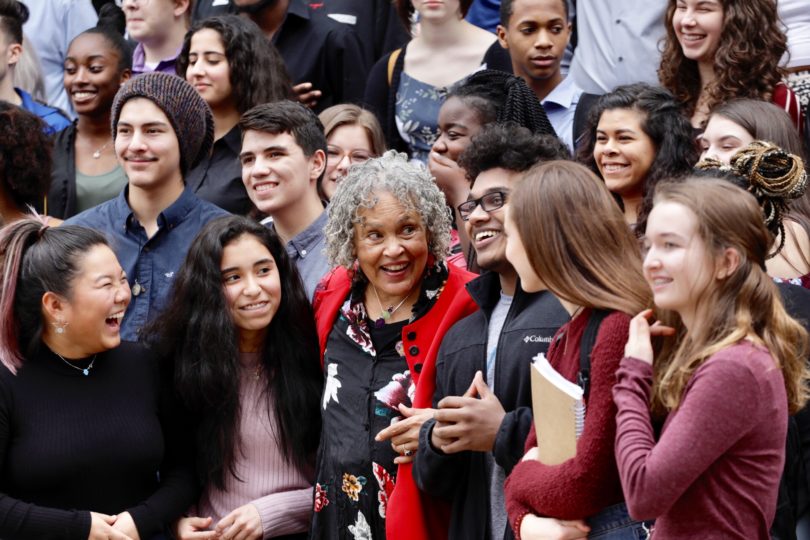 Charlayne Hunter-Gault met with students from several area high schools before she delivered her Holmes-Hunter Lecture at the Chapel. (Photo by Dorothy Kozlowski/UGA)

Charlayne Hunter-Gault passed the proverbial baton to the next generation during the annual Holmes-Hunter Lecture held Feb. 15 at the Chapel.

“It’s truly time for every citizen, no matter your age, to get woke,” she said. “And that means helping keep our democracy safe, and it means doing the hard work of digging for good information with a variety of sources.” 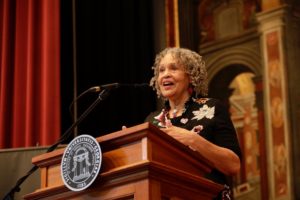 “I want to share a little of my life with you today in the hope that you will be inspired, or further inspired, to make sure that your armor is fitted and polished so that you can help bind wounds and defeat the kind of divisions that are tearing at the fabric of our nation,” she said.

The lecture is named for Hunter-Gault and her classmate, Hamilton Holmes, who were the first African-American students to attend UGA. They arrived on campus in 1961 after civil rights leaders in Atlanta successfully challenged the segregation policy at the state’s universities. In 2001, the academic building where Hunter-Gault and Holmes registered was renamed the Holmes-Hunter Academic Building in their honor, marking the 40th anniversary of the desegregation of the university. 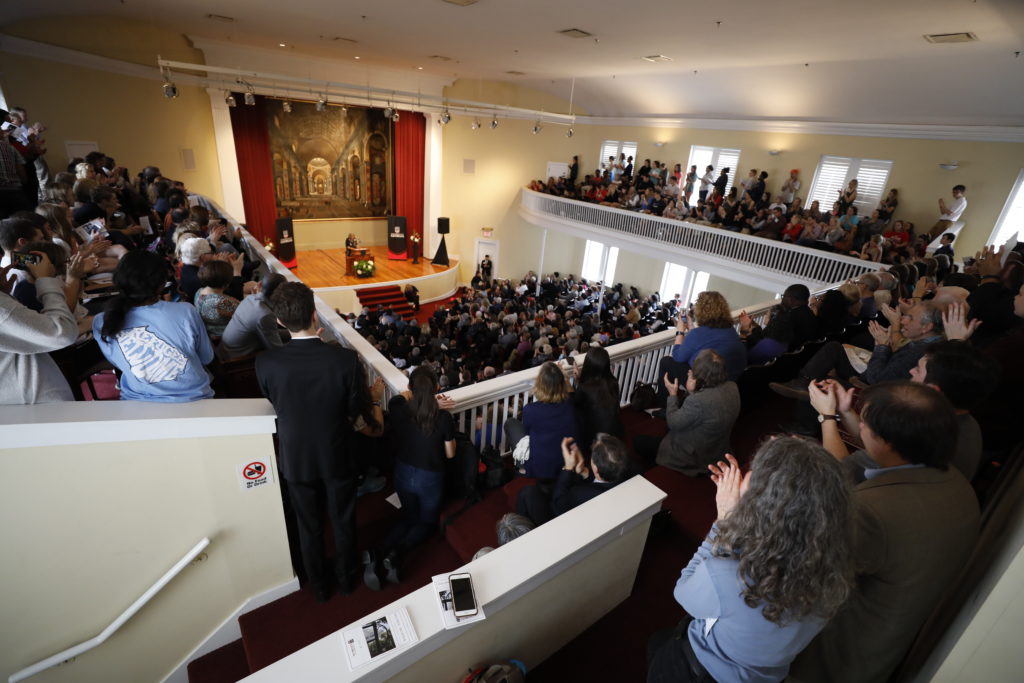 It was a standing-room-only crowd for Hunter-Gault’s speech. (Photo by Andrew Davis Tucker/UGA)

“I come today, of course, as the remaining member of the team—and we were a team—for whom this lecture is named,” she said. “And while my classmate, Hamilton Holmes, is now an ancestor, I knew him well enough to know that he is here with us.”

Hunter-Gault recognized others who “helped pave the way for the diversity and inclusion we see in today’s Bulldogs.” Two people in attendance Hunter-Gault specifically called attention to were Carolyn Long, who helped form the Committee on the Appeal for Human Rights that led the Atlanta Student Movement in 1960, and Connie Curry, who was involved in the Student Nonviolent Coordinating Committee and the Freedom Movement.

“These are the people who made it possible for all of us to enjoy life as we do here in the South and in America,” she said.

Hunter-Gault challenged the students in attendance to imagine themselves going through the same experiences as Long and Curry at their age and said that those history lessons are still relevant today. 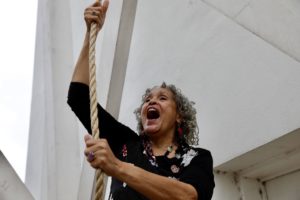 After her lecture, Hunter-Gault took the opportunity to ring the Chapel bell, a campus tradition. (Photo by Dorothy Kozlowski/UGA)

“You are in a position to determine whether or not we keep the values of our moral universe—a universe where people are respected by the content of their character,” she said.

Hunter-Gault graduated from the Grady College of Journalism and Mass Communication in 1963, going on to work for prestigious media outlets like The New Yorker, The New York Times, PBS, CNN and NPR.

She and her husband, Ronald Gault, recently established a new endowment, Giving Voice to the Voiceless, to provide grants to UGA students promoting social justice and global understanding.

Sponsored by the Office of the President, the Holmes-Hunter Lecture, also designated as a Signature Lecture, focuses on race relations, civil rights and education and has been held annually since 1985