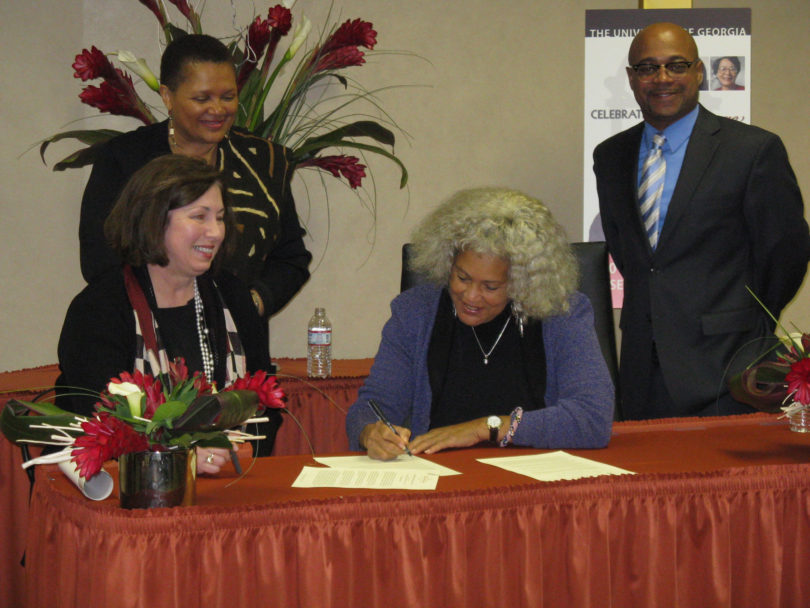 Charlayne Hunter-Gault came full circle Jan. 10 when she donated her personal papers to the Richard B. Russell Library for Political Research and Studies as part of the 50th anniversary celebrating her role in integrating UGA.

“She took a brave step when she walked onto campus 50 years ago,” said Sheryl B. Vogt, director of the Russell Library, “and she took another first step by establishing the library’s first African-American woman’s collection. Mrs. Hunter-Gault’s donation takes us another step in our commitment to collect materials that comprehensively document the full spectrum of political life and public policy in Georgia.”

“One cannot overstate the value of this donation to the Russell Library,” said Robert Pratt, UGA history professor who wrote a book about the desegregation struggle. “Charlayne Hunter-Gault, Hamilton Holmes and Mary Frances Early were among that early generation of pioneers who blazed a path of equal opportunity and inclusion that challenged us to be better at every level.

“For that reason, their insights and perspectives during those turbulent years are invaluable,” he added. “Charlayne’s papers will be immensely valuable not only to contemporary scholars but to future generations as well. UGA should consider itself most fortunate to have access to this prized possession.”

Hunter-Gault’s collection contains correspondence, newspaper clippings and other papers relating to her experience integrating UGA and her early career as a journalist. There also are documents and memorabilia relating to her personal and family life. The research materials and drafts of her 1993 biography In My Place are also in the collection.

“While these early papers are content rich and will be welcomed by researchers,” Vogt said, “we are as excited about the opportunity to work with Mrs. Hunter-Gault to document her career as a prize-winning journalist and further enhance the library’s holdings with materials that will contribute to women’s studies and issues of national and global significance.”

“While some of the events during those early days 50 years ago might have caused my dream to turn into a nightmare, I am here today having fulfilled my dreams beyond even my wildest expectations, because good people did the right thing-in the past and in that challenging present,” Hunter-Gault said.

Answering questions from the audience, Hunter-Gault fondly recalled the relationships she developed with people who reached out to her, in particular, English professors Frances Wallis and Dorothy McCullough.

“We had many stimulating discussions, not about racism and intolerance, but about topics ranging from the works of J.D. Salinger to Yevgeny Yevtushenko to William Shakespeare and the poems of Robert Frost. . . ,” Hunter-Gault said. “For a while, when I had to daily confront the hostile reaction to me as a racial symbol, my visits to Miss ­Wallis’ apartment helped re-enforce my existence as a normal human being and also to keep my eye on the prize of fulfilling my dream of becoming a journalist.”