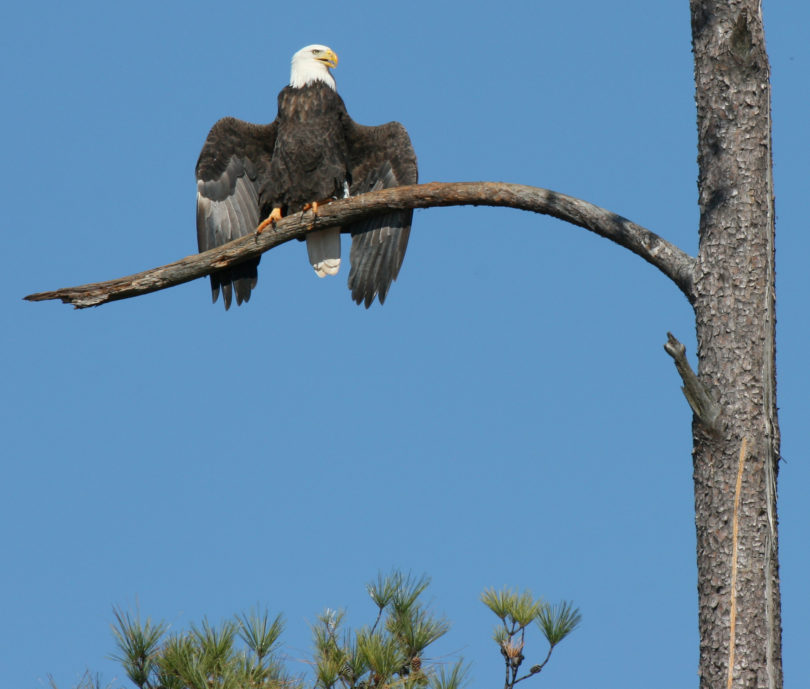 Athens, Ga. – University of Georgia researchers have formally identified and named toxic cyanobacteria that have been killing American bald eagles across the Southeast.

After years of studying the cyanobacteria coating the leaves of water plants in lakes, researchers in UGA’s Warnell School of Forestry and Natural Resources have determined that it is a previously undiscovered species in a new genus. In a paper published recently in the journal Phytotaxa, they named it Aetokthonos hydrillicola and lay out evidence that it is responsible for the eagle deaths.

“This new species has a growth form and gene sequence so unusual that it does not fit into any of the existing families,” said Susan Wilde, the Warnell professor who has been leading the research. “The naming convention for cyanobacteria is to use Greek for the genus—Aetokthonos translates to ‘eagle-killer.’ The species name is always Latin, and hydrillicola means ‘lives on hydrilla.'”

Beginning in the mid-1990s, American bald eagles started to die off in noticeable numbers from a neurological disease called avian vacuolar myelinopathy. AVM was first found in Arkansas in 1994, but over the past two decades, 160 eagles are known to have died across the Southeast from the disease, including 80 from one Georgia impoundment on the Savannah River, the J. Strom Thurmond Reservoir.

Researchers speculate the death toll is actually much higher because most of the dead birds are never found. And the deaths will continue to rise and spread to new locations, Wilde said, because “the invasive hydrilla and associated cyanobacteria spread to new lakes.”

Animals afflicted with AVM develop brain lesions that impair their motor skills, causing difficulty walking, swimming or flying. Once they consume the toxin, eagles suffer a neurological breakdown with unique holes in the brain and spinal cord, then death.

Wilde realized that in virtually every site where bald eagles died, there was an intense invasion of hydrilla, an invasive aquatic plant native to Asia and considered the ultimate aquatic weed in freshwater locations where it is found. She hypothesized that the eagles were eating tainted prey: waterbirds called coots eat the hydrilla, develop AVM, then pass it on to the eagles who prey on them as food. She just had to figure out why that was happening, and a close examination of the hydrilla led her to the culprit-blue-green algae coating the leaves of the very plants the coots were eating, confirmed at every location where birds were dying from AVM.

Over the past few years, Wilde has been collecting samples from every site of an AVM eagle death, taking slimy hydrilla to her Warnell lab for analysis. She found that Lake Thurmond near Augusta has the highest cyanobacterial concentration of the 20 confirmed AVM sites in six states.

Since 2008, she has been testing these samples using DNA sequencing, light microscopy, epiflourescent microscopy, scanning and transmission electron microscopy and other tests to identify its characteristics. She and her team originally placed the cyanobacteria in the order Stigonematales, but their tests show Aetokthonos hydrillicola is actually in a new genus and is unique even at the family level.

Wilde’s co-authors on the study include Jeffrey Johansen of John Carroll University, Dayton Wilde and Peng Jiang of the UGA department of horticulture, former Warnell student Bradley Bartelme now at EnviroScience, and Rebecca Haynie, a former toxicologist in Wilde’s lab now at the SePRO Corporation.

Aetokthonos hydrillicola’s growth is strange even for cyanobacteria. It forms large colonies that branch out horizontally and vertically on the hydrilla leaves but is not found in the water or sediment. Cyanobacterial blooms that cause wildlife, livestock and even human health concerns are increasing in recent decades and mostly occur in the water column. Another UGA project called CyanoTracker (http://www.cyanotracker.uga.edu/) has started to trace these cyanobacterial water blooms using social media. This new species associated with eagle deaths is hiding on the underside of the aquatic plants, so it is more difficult to detect.

In order to test the theory that the cyanobacteria is producing the neurotoxin that causes disease in birds, the researchers studied many lakes with hydrilla infestations. Some had the new cyanobacterial colonies on the leaves, but many did not. By monitoring both types, the researchers demonstrated only the lakes with Aetokthonos hydrillicola have birds suffering and dying from AVM.

Wilde said now that they have strong evidence for what’s causing the AVM deaths, she will need to find out what environmental conditions are promoting Aetokthonos hydrillicola.

“It’s already in lakes from North Carolina to Texas,” Wilde said, “and if it continues to spread, it could greatly undermine the bald eagle’s recovery and threaten other birds and aquatic wildlife. We already know that grass carp and turtles can develop the same AVM lesions, but we need to find out how it can affect the rest of the aquatic food web.”

A solution to stopping the spread of Aetokthonos hydrillicola might not be easy, but one idea involves releasing grass-eating carp into affected lakes, a tactic that was successful in Lake Murray in South Carolina, where 64,000 carp ate 3,880 acres of the invasive plant over two years. Unfortunately, she said, this non-native, sterile carp consumes other desirable water plants important for fish and wildlife habitat.

The study is available online at http://www.biotaxa.org/Phytotaxa/article/view/phytotaxa.181.5.1.