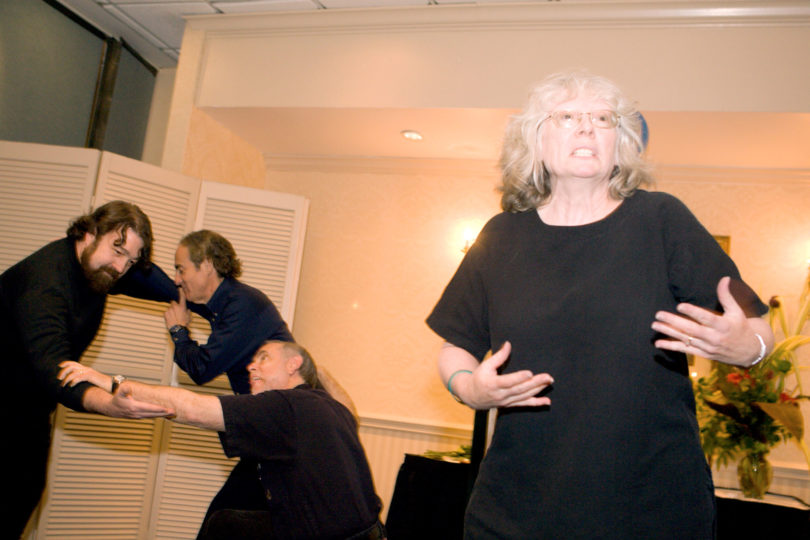 As two actors spoke in pseudo French gibberish, two more “translated” the words on the fly, creating a nonsensical narrative that loosely followed the title for their play, suggested seconds before by an audience member: “L’amour, l’amour.”

Moments later, an audience member blurted out “retirement!” when the actors asked for suggestions to inspire poetry. And sure enough, one by one, each of the actors created a poem about retirement on the spot, in forms ranging from haiku to limerick to sonnet. One managed to reel out verses in iambic pentameter with only minutes of preparation.

Toward the end of the evening, the actors assembled in a line, each taking a makeshift verse in a blues song focused on the subject-once again supplied by an audience member-of melted ice cream.

So it goes in a typical show from MindTeazers, an improv performance group composed of seven local actors, including several with UGA ties: Jerry Gale, associate professor of child and family development, Jay Aronson, professor of management information systems, and David Oates, host of WUGA-FM’s “Great Apes” radio show. They follow the formula familiar to viewers of the television show “Whose Line is it Anyway,” in which audience members are encouraged to suggest the various themes and key words that make up the skits.

MindTeazers began about one year ago, bringing together experienced actors who had been members of the Athens improv group Playmakers-Athens Montessori School founder Warren McPherson, Gale and writer and artist Janice Pulliam-as well as novices Kirby Amick, a dental technician, and Jim Richardson, a jeweler. Amick and Richardson, both musicians, joined soon after Amick took a stand-up comedy class from MindTeazers director Lisa Mende.

Mende said performing improv isn’t as nerve-wracking as one might think. Once she’s onstage, she’s “hyper-charged,” she said.

“I’m almost outside of myself. I can say what I’m saying and watch myself. The fun part is not just surprising the audience, but surprising yourself.”

Aronson and Gale said the group has an extra benefit in the classroom.

“It helps me with my general attitude,” Aronson said. “Teaching, and in many ways life, is continual improvisation.”