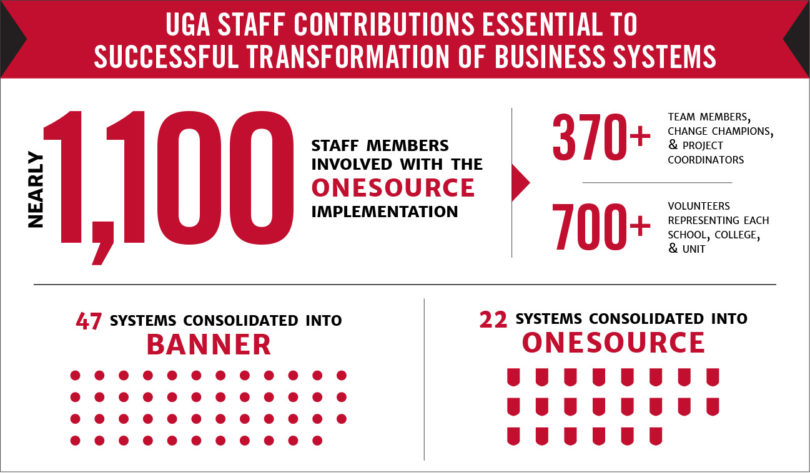 Changes in information-based infrastructure have made a significant impact at the University of Georgia. (Infographic by Lindsay Robinson)

Over the last few years, the University of Georgia has made significant improvements to its information-based infrastructure. While these improvements might not be as visible as new roads or buildings, their impact is just as far-reaching.

“The transformation we have experienced in the capacity of our information systems over the last several years has been extraordinary,” said President Jere W. Morehead. “This massive effort has required a significant investment of time and resources, but most importantly, the diligent work of staff members across campus. Thanks to their commitment, the university is well positioned for further success.”

“This institution has big aspirations, and behind each of those goals has been a new information system or a new technology resource that our staff and leadership have been able to use as tools to reach them,” said Timothy Chester, vice president for information technology.

The most recent of these changes was the final stages of the OneSource project, which aligns the university’s systems with those used by the University System of Georgia.

“The change has been transformational, not only from a business process and data perspective, but also to watch how our organization teams up and works together,” said Holley Schramski, Finance Division associate vice president.

In addition to replacing aging systems, the purpose of the OneSource project is to integrate, streamline and enhance business processes; improve data collection and reporting capabilities; enhance data privacy and security; and standardize and align business processes across the University System of Georgia.

“These systems now collect so much more data for us. As an organization, we are going to be far more data-rich than we ever have been before,” Schramski said. “The systems allow us to process transactions, but more importantly, they also allow us to focus on what the data is telling us so that we can be better decision-makers.”

What is unique about the three-year project is that it enhanced services for every UGA employee. And nearly 1,100 employees had a hand in the transitions serving as team members, Change Champions, project coordinators, trainers or volunteers.

“It has taken a tremendous amount of effort from staff and faculty from every corner of the university to get us this far,” said Ryan Nesbit, vice president for finance and administration. “We are deeply grateful for the engagement, the collaborative spirit and the dedication, as well as the patience of the entire university community. Together, we are achieving the ambitious goal of transforming our business processes as we complete this move from legacy systems to more modern systems.”

These new systems certainly create efficiencies, such as transitioning the pay date for salaried biweekly and hourly biweekly employees to the same day, but they also provide benefits to end users. Through OneUSG Connect, employees can now create model sample paychecks, change tax exemptions, and change and add direct deposit accounts. In addition, the processes for requesting leave and travel reimbursements have been streamlined and are now paperless and fully automated.

“Continuing to improve our systems in ways that allow people to more easily fulfill their roles in turn helps the university fulfill its missions,” Schramski said.

Athena, also known as Banner, the university’s student information system, was implemented in 2014 and went through another upgrade in fall 2018. Banner consolidated databases from admissions, financial aid, the registrar and the bursar into one system, allowing for better data.

“We get better answers about basic questions such as how many students are here, what classes are they enrolled in and others,” Chester said.

Together with Technolutions Slate, the program UGA uses in its admissions process, financial aid is awarded more quickly and accurately. According to Chester, the sooner UGA can tell an admitted student what their financial aid award is going to be, the more likely that student is to enroll. As a result, the university continues to admit the most academically-qualified classes each year, which in turn helps raise graduation rates.

At the core of all of these changes, Chester said, are the significant network improvements the university has invested in since 2011. At that time, the university had a total bandwidth capacity of 1 gigabit. That was expanded to 20 gigabits in 2013 and now is at 40 gigabits.

“That’s been the foundation behind almost everything else,” Chester said.

Not only do these network improvements help support the exponential growth in the number of wireless devices on campus, but they also play a significant role in supporting research by allowing them to more easily collaborate and share their findings.

As bandwidth has expanded, so have UGA’s information security efforts. Chester pointed out that UGA has not experienced a breach for several years since ArchPass was implemented. It started with financial systems, but now several other systems, including email, are protected by ArchPass.

The university also expanded its online learning offerings with the suite of tools, including eLearning Commons (eLC), an online learning management system, and Kaltura, a media storage and streaming solution. These online and blended teaching opportunities allow students, as well as the faculty and staff using them, more flexibility in how, when and where they learn. In particular, Chester said these additions have helped boost online course and summer enrollment numbers.

“Students really like having the ability to travel but still grab those one or two classes they need,” he said.

All of these improvements help build a stronger university by creating efficiencies and providing more opportunities to remove barriers for students, enhance the learning environment and solve grand challenges. But Marie Mize, Staff Council president, points out another advantage.

“Anything that can make our work a little bit better is definitely worthwhile,” she said. “It also frees people up to do things they might want to do and allows us to be more creative, which makes people more excited.”

Chester said any future improvements will continue to support research and innovation and align with the strategic plan.

“The university is moving in some really important directions and really making some gigantic leaps,” he said.