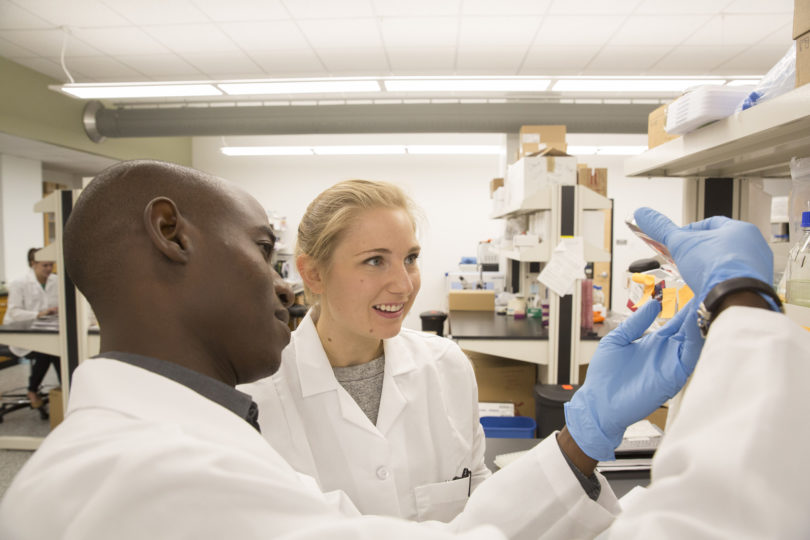 Scientists in the new Center for Vaccines and Immunology seek to improve global health by working on vaccines to battle emerging and re-emerging diseases.

UGA’s new Center for Vaccines and Immunology is dedicated to improving global health by creating vaccines to fight emerging and re-emerging diseases such as influenza and Zika.

“The University of Georgia continues to build its capacity for conducting translational research to prevent and cure some of the world’s most deadly diseases,” Morehead said. “We are excited about the many ways the new center will support our world-renowned faculty who are committed to improving global health.”

Research conducted in the CVI will be dedicated to the understanding of vaccines, vaccine-stimulated immune responses, basic immunology of infectious diseases and translational trials to assess vaccines that impact both animals and humans. CVI researchers will work closely with industrial, public health and academic partners on the control and eradication of pathogens deemed to be a high priority by international public health organizations.

Initial projects by four complementary research teams are now underway, including development of a Zika vaccine in partnership with GeoVax Labs Inc. and a new generation of influenza vaccines that trigger a broader defense against seasonal and pandemic flu viruses for both humans and animals. As previously announced, the flu vaccine is being developed with Sanofi Pasteur, the world’s largest manufacturer of influenza vaccine.

“The center already is enabling or enhancing relationships with major industry partners that can ensure access of new UGA vaccines and related products to world markets,” said Lee. “The center also is encouraging new levels of collaboration with academicpartners around complementary interests and expertise.”

Ross’ research work will focus on Zika, influenza, respiratory syncytial virus, HIV/AIDS, dengue virus and chikungunya virus. The other three teams based in the CVI are headed by:

The CVI will serve as a training ground for tomorrow’s scientists while also helping UGA forge new ground in translational research. Plans for the facility include offering research fellowships and annual symposia that will attract local, national and international leaders in research to share their work with Georgia’s biotech industry. In addition, the CVI will offer clinical trials to animal patients through UGA’s Veterinary Teaching Hospital and to people through the local UGA Clinical and Translational Research Unit.

The CVI’s initial renovations began last winter and were completed earlier this year.

Located in space previously used by the UGA Veterinary Teaching Hospital, which moved to its new campus in March 2015, the first phase of the CVI occupies about 13,000 square feet of space that has been renovated into four cutting-edge research laboratories. Additional renovations, scheduled to begin later this year, will enable the CVI to house up to two additional research teams and ultimately employ 100 scientific staff in 10 laboratories and supporting core facilities. Financial support for phase 1 of the renovations and equipment was provided by the Provost’s Office, the College of Veterinary Medicine, the Office of Research and other UGA units, and by the Georgia Research Alliance.