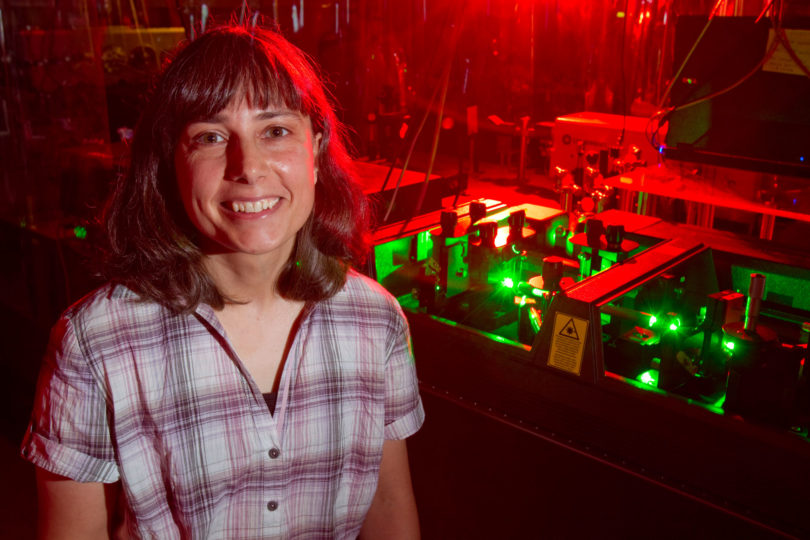 Susanne Ullrich and her team in the physics and astronomy department used a technique called time-resolved photoionization with femtosecond (one-quadrillionth of a second) resolution to unravel the mechanisms that protect adenine against UV damage.

Earth’s early atmosphere provided little shielding for ultraviolet light from space, so many prebiotic molecules, bombarded by it and light of other wavelengths, had a hard time surviving at all. But some molecules became photostable—able to withstand the assault and thrive as building blocks of life.

Five of the molecules that survived were the nucleic acid bases adenine, cytosine, guanine, thymine and uracil.

Now, in just published research, a UGA physicist and a collaborator in Germany have shown that one of these building blocks of DNA and RNA, adenine, has an unexpectedly variable range of ionization energies along its reaction pathways.

Far-reaching implications
This means that understanding experimental data on how adenine survives exposure to UV light is much more complicated than previously thought. It also has far-reaching implications for spectroscopic measurements of heterocyclic compounds—those with atoms of at least two different elements in their rings.

“Photoprotection relies on the conversion of potentially harmful UV radiation into heat and has to operate on ultrafast time scales to compete over pathways that lead to the destruction of the biomolecule,” said Susanne Ullrich, an assistant professor of physics in the department of physics and astronomy. “Disentangling these pathways and their time scales is challenging and requires a very close collaboration between experimentalists and theorists.”

The research is in the online journal Physical Chemistry Chemical Physics. Co-author of the paper is Mario Barbatti, a theorist at the Max-Planck Institute in Mulheim, Germany.

The quantum-chemical calculations create a new baseline on how time-resolved spectroscopic techniques based on photoionization can be most reliably used to study this class of molecules.

“Photostable organic molecules participated in the complex molecular evolution that led to the formation of life,” said Ullrich. “Because of the significance of nucleic acid bases as the genetic coding material, the photophysics of nucleobases has received considerable theoretical and experimental attention. This new work can help clarify inconsistencies researchers always have found in studying photoionization and photoelectron spectra of adenine.”

Adenine is vaporized and ­transported into the spectrometer in a supersonic jet expansion. A pump pulse excites the sample of molecules, and finally a probe pulse is used to examine the sample after an adjustable delay time.

This examination is based on the process of photoionization that removes an electron from the molecule. The kinetic energy of the released photoelectron is measured in the spectrometer and provides the spectroscopic information needed to establish the photoprotection mechanism of adenine.

There has been a longstanding divergence between theoretical and experimental results when it comes to studying the IP of adenine and understanding on which surface adenine ­“relaxes” after it is excited with UV light.

New insights
Understanding it more clearly could give new insights into how this important building block of life has continued to exist with stability in a world with millions of genetic threats.

“To our surprise, we found there were significant variations in the ionization energy between two different regions on this pathway,” Barbatti said. “Due to the general character of the three pathways we studied, we believe the IPs computed along them can be used as a general guide for helping with setup and analysis for further experiments, not only with adenine but other related compounds.”

Before this work, little has been known about the behavior of ionization potentials along the main reaction pathways for gaseous adenine in an excited state.
Calling that a “knowledge gap,” Barbatti and Ullrich said the new findings have “implications for experimental setup and data interpretation.”