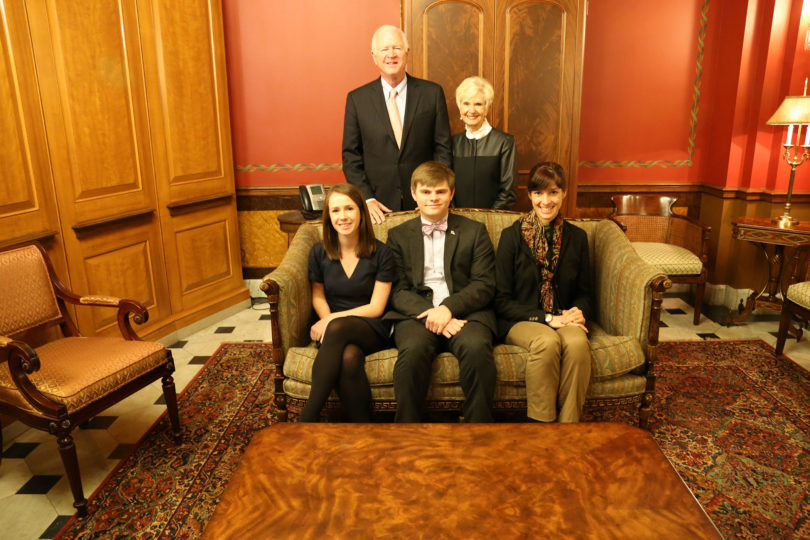 The students already knew about their internships but didn’t find out they were chosen as Chambliss Fellows until mid-December. “I thought, ‘Oh my goodness, this is too good,’ ” said Ratan. Traynham agreed, saying she was “honored but shocked” that she’d been chosen for the opportunity.

Bagala, from Cut Off, Louisiana, is no stranger to politics.

“I had a pretty firm grasp on what working in politics was like … but I think my biggest surprise on the Hill has been the importance, and size, of congressional staffs. The amount of work that is required simply to keep a Senate office working is incredible,” he said.

In particular, Bagala is taking this opportunity to see if a life in Washington, D.C., is right for him.

Ratan, from Augusta, is looking to combine her internship with research related to her thesis on the economics of drug trafficking, which she completed in fall 2016, by doing data analytic work that puts an economics perspective on something that is typically in the political science field.

“I’m really excited to keep doing the work I did on my thesis and expand upon that,” she said.

She’s also looking forward to having a say and contributing to the policymaking process.

Traynham, from Macon, hopes this internship is the start of a career in Washington, D.C.

“It’s my dream to work on the Hill,” she said, “so interning is a pretty essential first step.”

Traynham knows she wants to work in politics and plans to take this opportunity to decide on the exact role she’d like to play and where she sees herself in the future.

“It’s very fast paced, and every day is different. So far I really enjoy working in that environment,” she said. “I have learned to never be afraid to ask questions.”

The fellowship program is part of the Chambliss Leadership Forum, which honors the commitment of public service that has defined the lives of former Sen. Saxby Chambliss and his wife, Julianne, and provides a platform to share his insights and expertise with the next generation of leaders.

“I knew I wanted to give back meaningfully to the people of this state who gave me the honor of serving them in the U.S. House and Senate for 20 years,” Chambliss said. “One way I am able to do this is to provide an avenue for young people to go and have an experience in our nation’s capital in Congress or one of the executive branch agencies.”

The Chambliss Leadership Forum consists of three programs: an annual fundraising dinner, the Chambliss Fellows Program and a campus lecture series. The forum’s overarching commitment is to student achievement and success at the University of Georgia.

The Chambliss Fellows Program, which aims to fund 10 students per year, came about from the collective input of UGA President Jere W. Morehead and Chambliss, along with several of Chambliss’ former staff members.

“During his final days in office after a lifetime of public service, I can distinctly remember sitting in Sen. Chambliss’ office along with President Morehead as we discussed this program. We felt then it would have a monumental impact on the students involved. Just two years later, it’s an honor to see the first class of Chambliss Fellows move into Delta Hall and begin pursuing the opportunity of a lifetime,” said Andrew Dill, director of federal relations with UGA’s Office of Government Relations.

To become a Chambliss Fellow, students must first apply and be accepted into the Washington Semester Program. Once accepted, they can apply for a Chambliss Fellowship. Any participant in the Washington Semester Program is eligible to apply, regardless of major. The Chambliss Leadership Forum selection committee then reviews applications, looking for “well-rounded students who show a strong commitment to public service in our state, nation and world,” according to Dill.

“There is no question that I think this experience will better prepare these Fellows for their future careers, regardless of which field they enter or what career path they take,” Chambliss said. “There is an opportunity to network with folks from Georgia as well as every other part of our great country, or in specific industry areas, that is just unparalleled.

“They will be challenged with a fast-paced environment to think on their feet and face a variety of issues,” he also said. “They will be exposed to a variety of agendas and opinions and learn how to navigate an environment where not everyone agrees. All of the skills needed to succeed in a congressional office will ultimately help that young person succeed in life in their profession or in the business world.”