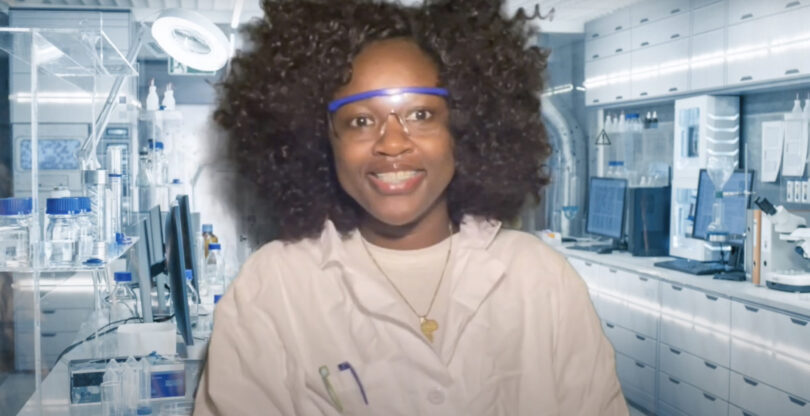 Before Fatoumata Toure entered kindergarten, she learned a hard lesson about the importance of fresh drinking water. Now as a college freshman, she has earned the top prize in the Capturing Science Contest, sponsored by the University of Georgia Libraries and the Office of Research, for making an informative and innovative video to explain the science behind the concerns.

Toure, a North Cobb High School graduate who intends to major in environmental engineering, received the top prize of $1,000 as well as a special bonus prize of $200 for this year’s contest for integrating research related to social justice in her piece.

“I wanted to do something that was different and innovative,” Toure said of her video that explored what happened to “Freshline Freshwater,” a character she created complete with blue hair and Vans. Toure portrayed a reporter trying to solve the mystery with various characters that explained environmental factors from E. coli to farming practices, and she went in depth into the social justice issues of redlining and urban planning that contributed to a health crisis involving lead in the drinking water in Flint, Michigan.

Because of social distancing during her Thanksgiving break, Toure decided to create a script for a one-woman cast, gathering up fun costumes and experimenting with a green screen to portray Zoom-style interviews for her Capturing Science project.

While Toure incorporated a lot of the research and information she recently gained from her college classes, her inspiration goes back to when she was a small child living in Guinea in West Africa.

While her grandmother had warned her against drinking the water in a nearby community, she couldn’t pass up the opportunity to enjoy a home-chilled popsicle. Because the water used for the treat was contaminated, she developed a severe bacterial infection.

“Looking back, I realize how fortunate I was. The reality is that most people in countries like that don’t have access to health care like I did,” Toure said, adding that her experience has inspired her to pursue her degree and work in the field of water quality management.

“The issue with water infrastructure is really complex, but she explained it in a really interesting way. It was so funny that I didn’t feel like I was learning, but at the end, I was blown away with what I learned,” said Amber Maduike, a senior studying biology and psychology.

As president of the Minority Student Science Association, Maduike helped judge this year’s special category, which was offered to the best entry that involved research on social justice or COVID-19.

“After all that’s happened in 2020, it was a really good idea to consider those issues,” Maduike said, adding that she and her fellow MSSA board members enjoyed seeing the broad spectrum of entries, from art projects to podcasts and websites. “There were a lot of interesting projects. They were very different, and it was hard to pick a winner.”

For Toure, who works at the circulation desk of the Science Library, the process of making the video was a prize in itself. She had fun creating the characters and learning new video techniques and skills, and she said that the lessons will serve her well in her future career.

“I want to work in engineering, but I know that a part of that has to be environmental literacy.

I can build all the coolest infrastructure in the world, but if I don’t teach the general population about how to take care of it, then we’re back at square one,” she said. “This contest allowed me to practice those environmental literacy tools because I know I want to do that.”

To learn more about the Capturing Science Contest and to view the entries, visit https://guides.libs.uga.edu/capturingscience.