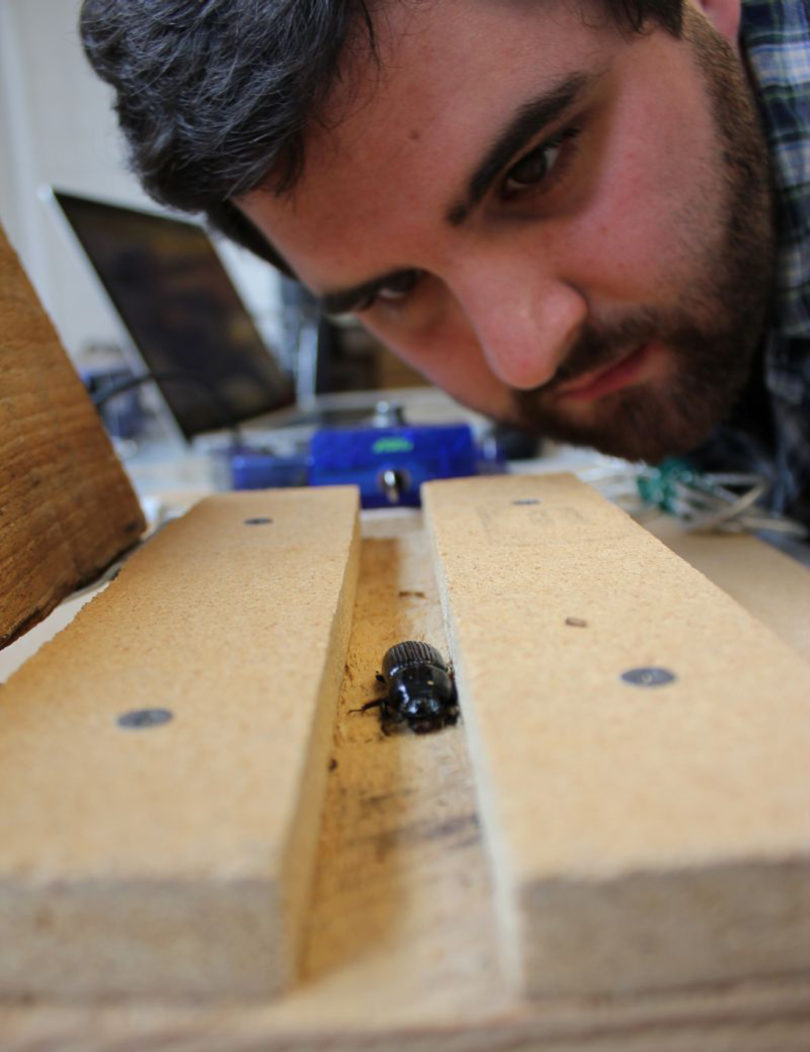 Athens, Ga. – All eyes are turned to London as the world’s top athletes compete for Olympic glory, but a humbler competition has been taking place in Andy Davis’s lab at the University of Georgia this summer, featuring some unlikely competitors—horned passalus beetles.

Davis, an assistant research scientist at the UGA Odum School of Ecology, has been supervising an undergraduate research project to measure the remarkable strength of these shiny black beetles—they can pull at least 100 times their own weight—that he calls “Olympians of the insect world.”

Horned passalus or “bess” beetles are common throughout the U.S. and live in rotting hardwood logs, aiding in the wood’s decomposition and playing an important role in woodland ecosystems.

The project grew out of a simple experiment conducted in Davis’s undergraduate physiological ecology class last fall, which involved harnessing the beetles to a small petri dish and adding pennies one at a time until the dish became too heavy for the beetles to move. “The students really enjoyed that lab,” Davis said.

Two students in the class were inspired to learn more about these unlikely powerhouses. With Davis’s guidance, the students devised individual research projects to explore some of the factors affecting the beetles’ strength.

Barrett Attarha, a biology major from Sandy Springs, was interested in determining which physical characteristics of beetles—such as length, girth, gender, and horn size—influenced how much weight they could pull.

Attarha spent most of the spring semester developing an experiment protocol. Using an apparatus designed by Davis—a track in the form of a narrow tunnel to mimic the conditions of the beetles’ natural habitat—he harnessed the beetles to a dynamometer and data logger, devices to precisely measure and record the strength of their pull. “It turns out that girth is the best predictor of pulling strength; the stockier the beetle, the more power it could generate with its legs,” said Davis. “We were not expecting that.”

At the same time, Taylor Piefke, an ecology major from Lawrenceville, compared body and horn size of male and female beetles. Piefke, who received his bachelor’s degree in May, used digital photography and image analysis software to determine that while male- and female-horned passalus beetles are similar in length, females have greater girth as well as slightly larger horns than males-information that was incorporated with Attarha’s results into a paper the three have submitted for publication.

An even more unexpected finding was that the way beetles were housed appeared to affect their performance. “We started to notice that beetles that were housed by themselves pulled better than those housed in groups,” Davis said. “We suspected that crowding was probably a source of stress for them.”

Davis credited his students for the success of the project. “I usually take one or two undergraduate research students per semester, and sometimes they come up with some really interesting sets of data,” he said. “This was one of them. I just set them up and let them go. It’s their project; it succeeded because they took ownership and followed through.”

Attarha, whose summer research was done not for credit but just because he was so intrigued by the results he was seeing, appreciated that approach. “Dr. Davis let me take the reins on this,” he said. “I’ve learned a lot about how the scientific process really works; it’s not like opening up a lab manual and following the steps with a teaching assistant to guide you through it.”

Davis will include a similar lab experiment in this fall’s physiological ecology class, and hopes that it will inspire future students to take on an independent research project.

“There are lots of interesting questions still to be answered,” he said. “And frankly, it’s a lot of fun.”