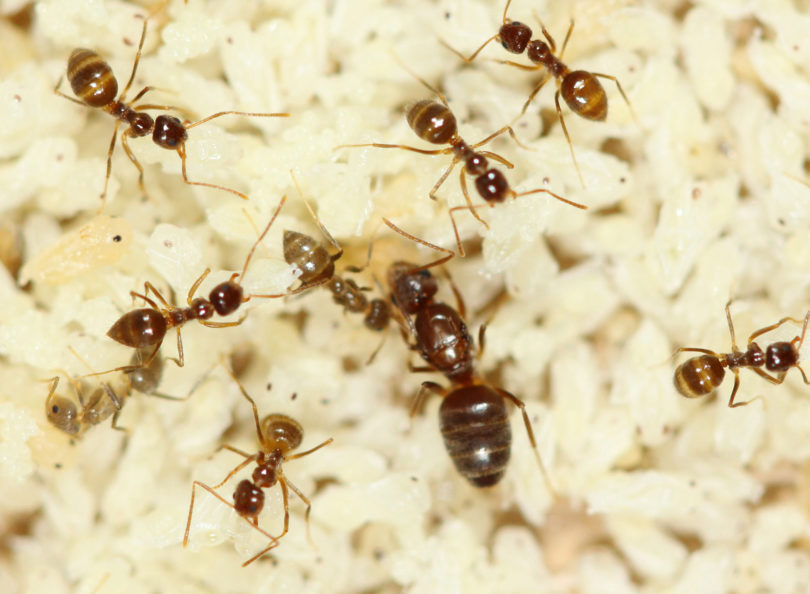 Griffin, Ga. – The tawny crazy ant has made its way into Georgia for the first time. University of Georgia Extension agent James Morgan in Dougherty County discovered the ant—which originates in South America—on Aug. 15 and submitted a sample to UGA entomologists for identification.

Prior to his discovery, the ant was found only in a few counties in Florida, Mississippi, Louisiana and Texas. Where it occurs in those states, it is a major nuisance. Morgan stumbled upon the ants at an assisted living facility, after the director called the UGA Extension office for help controlling the insect.

“What I found was thousands of dead ants in a pile in the corner of the bathroom floor,” Morgan said. “The duplex was vacant, and the ants had come in looking for a food source. When they came in, they died and we found hundreds of them piled up around baseboards and in corners.”

After further investigation outside the facility, Morgan found droves of the ants in an outbuilding.

“We found them in the lawn on debris and dead wood, and we traced them back to a storage area that was full of appliances,” he said.

Accustomed to identifying Argentine ants, fire ants and other ants common to Georgia, Morgan knew these ants were different.

“They’re reddish in color, very tiny, and they run around and scurry really fast. And they don’t march in a straight row like Argentine ants,” Morgan said.

He sent a sample to UGA entomologist Dan Suiter, an Extension specialist in urban entomology housed on the UGA campus in Griffin. The samples were confirmed as tawny crazy ants (Nylanderia fulva) by taxonomist Joe MacGown at the Mississippi Entomological Museum.

The ant is classified as a nuisance because of its attraction to electricity and because it travels in masses. It likes to get into electrical boxes, Suiter said.

Large accumulations of the ant can cause short circuits and clog switching mechanisms, which can result in electrical shortages in phone lines, air conditioning units, chemical-pipe valves, computers, security systems and other electrical locations.

“Most people will be overwhelmed by the number of tawny crazy ants they’ll find. It’ll be through the roof,” he said. “They’ll come in your house, and it becomes a kind of ‘ant from hell’ scenario.”

Suiter said once an ant species gets established, it’s “really hard to dislodge them.”

About one-eighth-of-an-inch long, tawny crazy ants are slightly larger in size than Argentine ants and have erratic foraging patterns. Argentine ants are dark brown in color, slightly smaller and do not move as fast or as erratically.

“We will probably get a lot of reports that people have it when they really have Argentine ants. Those are sugar ants—the ones you see in trails,” he said.

“They can be inches deep in a pile,” he said. “When they get up and going, the numbers that die will be in the tens of thousands in and around a structure.”

Like many non-native, invasive species, no one knows exactly how the ant came to the U.S. or how it made its most recent trip to the Peach State.

“It probably came into the U.S., initially, from several Florida ports and one in Mississippi and one in Galveston,” Suiter said. He thinks the ant may have hitched a ride on a plant brought into the state from a region where the tawny crazy ant is already established.

Back in Albany, Morgan says the director of the assisted living facility had no knowledge of anyone traveling to any of those regions.

To discourage the new ant species and other pests from entering a home, Morgan recommends searching for and sealing any cracks around doors and windows. Due to large populations, the tawny crazy ant typically requires a pest management professional.

To verify the presence of tawny crazy ants, take a sample to the nearest UGA Extension office. For office locations, call 1-800-ASKUGA1 or see http://extension.uga.edu/.