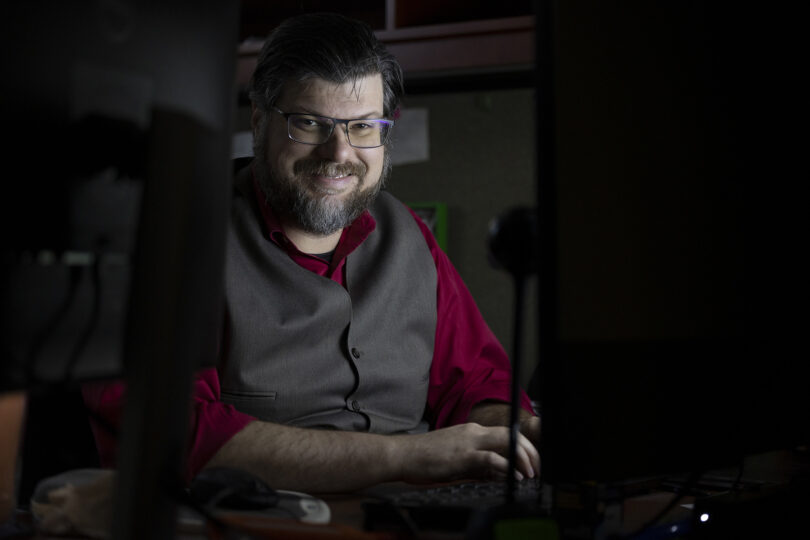 IT Senior Manager Ben Morrison of the College of Public Health inside his office at Rhodes Hall on the Health Sciences Campus.

Tucked away on the Health Sciences Campus of UGA, the College of Public Health houses students, faculty and staff on 56 acres just west of the main University of Georgia campus.

Here, IT manager Ben Morrison works with his team to move the College of Public Health forward in its technology and digital abilities.

“I spend a lot of time answering questions. How do we do this? What do we do next? How do we spend this money? That sort of thing,” said Morrison.

Morrison became the manager of the IT department two years ago, in the height of the emerging COVID-19 pandemic, after starting in the department in 2006. He jumped into a university-wide effort to help classrooms operate online, which is highly dependent on efficient and modern technology.

“We had the components; we just sort of had to rely on them exclusively,” said Morrison. “We’ve been using Zoom for a couple years beforehand, and I was kind of amazed at how that happened on the scene just when we needed it.”

Morrison also needed to assemble his own team and found “that now I’m in management, it’s people that are much more interesting than computers.” He said he looked for people who would be willing to hit the ground running, and he found that in Courtney Joseph and Leo Zhou, who have worked collaboratively with Morrison to solve technology issues at the Health Sciences Campus. He has also been grateful for the experience and expertise of Wayne Crotts, the veteran systems administrator in the College of Public Health.

Morrison says they are currently working on server renovations that will make devices more secure and increase the modernity of classrooms.

“We’re trying to get a huge renovation underway for our largest room. And we’re also renovating all of our server equipment and our entire data room,” he said.

When he’s not behind a desk, Morrison is a talented musician, even producing three studio albums under the band name The Surface of the Deep.

“I’m a guitarist and I play trumpet, but I haven’t practiced in ages,” said Morrison, conscious of his neighbors with young children.

He also classifies himself as “a collector by mentality,” and his office is lined with different Funko Pops, a type of character figure based on real and fictional characters.

“They come in any character you can imagine,” he said. “You could get Super Grover from Sesame Street, or you could get Gene Simmons from Kiss.” Morrison claims he had to be discerning in his collecting to avoid filling a warehouse with ones he finds “vaguely interesting.”

Morrison also enjoys supporting local businesses and restaurants like Hendershots Coffee and Thai Spoon, though he is mindful of the COVID-19 pandemic.

“I need to purposefully go back out into the world,” he said.