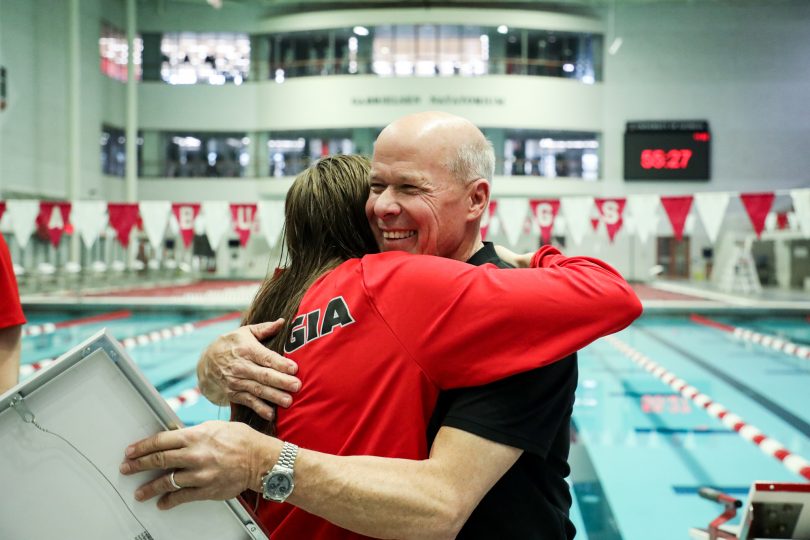 Jack Bauerle, who has coached 42 seasons with UGA Swimming & Diving, embraces Georgia swimmer Sandra Scott in February 2020, weeks before the pandemic shut down the season.

As the Olympics approach, Bulldogs swimmers eager to build on strong season

When the pools finally emptied out in Greensboro, North Carolina, it was clear the Georgia Bulldogs had done something special: Both the men’s and women’s teams finished in the top 10 at the 2021 NCAA Division I Swimming & Diving Championships.

The Georgia Bulldog women’s swimming & diving team took eighth place at the finals, its 29th top-10 NCAA finish but the first since 2017. The men took fourth (the second-highest ranking in its history). And with returning swimmers like freshman Jake Magahey, who won an individual national title in the 500 freestyle, the Bulldogs are equipped to compete for championships years to come.

Although both teams had been hungry to claim a national championship in 2021, just getting the chance to complete the season was a relief.

A year earlier, after a slow start to the season, the two UGA teams fought their way into the top 10 heading into the NCAAs. Jack Bauerle AB ’75, head coach of both Bulldog teams, called them among the most improved in his 42-year career. Both squads felt like they had a shot at an NCAA title.

“We were locked and loaded,” says Bauerle, himself a former Bulldog swimmer. “We were ready to go.”

UGA was preparing to host the women’s NCAA finals on March 13, 2020, in Athens. But in the days leading up to the competition, the magnitude of the rapidly 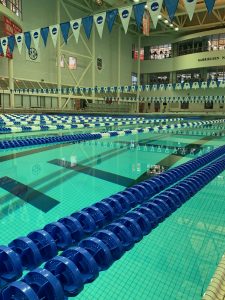 NCAA banners were left hanging in Gabrielsen Natatorium for months after the coronavirus pandemic canceled the NCAA women’s finals in Athens. (Christie Purks/UGA)

Plans for the competition started to change on a daily and then hourly basis, as everyone tried to get a handle on the pandemic. The spectator list dropped from an expected full house to just family, to no spectators at all. A week before the event began, it became clear that the whole competition had to be canceled. The student-athletes were sent home. As everyone hunkered down in those early days of lockdown, the NCAA’s banners and wayfinding signs were abandoned at a quiet Gabrielson Natatorium.

It was a gut punch for both of the Bulldog teams, especially the seniors. Some of the swimmers had prepared to compete for individual national championships; some were even Olympic hopefuls.

Months later, in the summer, Bauerle would look out of his Ramsey Student Center office, which sits right next to the pool, and still see the NCAA’s abandoned signs, a daily reminder of business left unfinished.

If Bauerle needed a lift, he only had to look above the pool to the dozens of red banners boasting UGA swimming titles, evidence of the sustained success the Swimming & Diving program has had under his tenure.

For the men’s: 21 individual NCAA championships.

And then there are the Olympics. Every four years (pandemics notwithstanding), a handful of men and women—current and former UGA swimmers—represent the U.S. and other nations in the pool at the Olympic Games. If you watch the Games, you know the names: Gunnar Bentz BBA ’18, Melanie Margalis BSFCS ’14, Allison Schmitt BS ’14, Maritza McClendon AB ’05, and Amanda Weir M ’08, to name a few. Bauerle has been a head coach or assistant coach for three Olympics.

The team’s student-athletes are equally impressive in the classroom, racking up dozens of NCAA Postgraduate Scholarships. Georgia was the first athletic program to have three recipients named NCAA Woman of the Year.

The success has been hard fought.

A Bulldog for Life 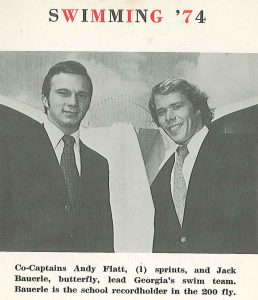 A promotional photo from when Jack Bauerle was a student.

Bauerle, now the Tom Cousins Head Swimming and Diving Coach, came to Athens in 1970. A native of Philadelphia, he had been recruited by programs nationally but chose Georgia after a visit to Athens. When he arrived, Bauerle was the only swimmer who hailed from north of the Mason-Dixon line. Sporting wavy blond hair and a pair of black Chuck Taylor sneakers, he might have seemed like an outsider but felt at home right away.

During his time as a swimmer, he set a handful of school records and captained the Bulldogs for two seasons.

As he was building the women’s program, he was given the reins to the men’s team in 1983. Over time, Bauerle learned how to connect with swimmers. How to bring out the best in highly recruited athletes and those who were swimming under the radar. He had help from loyal assistant coach Harvey Humphries, who coached with Bauerle until retiring in 2019.

The teams—particularly the women’s team—really hit their stride in the late ’90s and early ’00s, winning back-to-back-to-back NCAA titles and stringing together a remarkable 103 straight dual and tri-meet wins at Gabrielsen Natatorium—including against top-tier opponents. From 1999 to 2016, the Bulldogs had their dynasty on lockdown, placing first or second in the nation for all but three seasons. 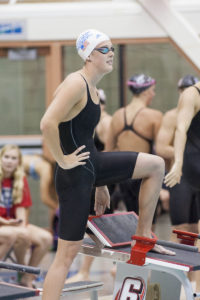 Eight-time Olympic medalist and former team USA captain Allison Schmitt was part of that success. She recalls that the quality of her teammates made her a better swimmer.

“Every day at practice, you had someone to race,” she says. “But it wasn’t like we were competitors who butted heads. We were teammates and best friends making memories together, holding each other to a standard that would push us and make us the best that we could be.”

Bauerle and the other coaches weren’t just interested in how the team swam. They made sure the student-athletes were making the most of their college degrees.

“A lot of coaches talk about academics,” says former UGA team captain Mark Dylla BBA ’12. “It really matters to Jack. There is a life after swimming, and our education takes care of that.”

“What stood out to me in a college setting was their emphasis not only on being a great athlete, but also a student, leader, and being part of the community,” says Schmitt. As a student, Schmitt would sometimes walk through downtown Athens with Bauerle. He seemed to know everyone he passed. Schmitt thought it was remarkable how much Bauerle was a part of his community.

“College is a place where you really grow as an individual,” she says. “And that has helped me with who I am today. I credit them with teaching us that at that age.” 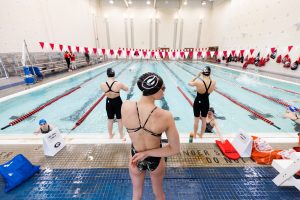 UGA swimmers warm up ahead of the 2021 Women’s SEC Swimming & Diving Championships in Athens. (Photo by Andrew Davis Tucker/UGA) 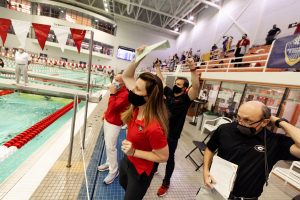 All of that past success, that attention to detail, made the 2020-2021 season a little less daunting.

Summertime COVID-19 protocols restricted swimmers from coming to campus. So that left Bauerle and the coaching staff scrambling to find pools for the swimmers to touch water.

The coaching staff, including longtime associate head coach Jerry Champer and former Bulldogs captain and national champion Stefanie Williams Moreno BSEd ’03, brought stability to what could have been a chaotic season, Bauerle says.

And with minimal interruptions—although there were plenty of sacrifices and social distancing—the Bulldogs were able to put in a season that could become a foundation for renewed dominance.

For right now, the Bulldogs have turned their attention to Omaha, Nebraska, where several will compete at U.S. Olympic swimming trials for the opportunity to go to the Olympics.

Next, they hope to get ready for a more normal season. With returning stars and a solid recruiting class for both teams, the Bulldogs are prepared to do even more.

Because even after 42 seasons, even with his status as the NCAA’s winningest active swim coach, Bauerle is still hungry to compete.

When asked if he’s nearing retirement, the 69-year-old Bauerle grins as he growls, “I’m not done yet.”