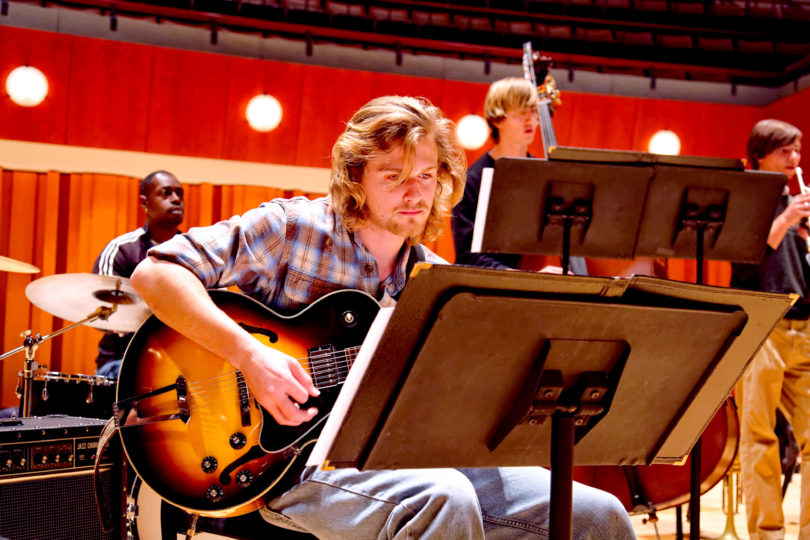 The UGA Jazz Ensembles will take the stage at Ramsey Concert Hall for their spring concert April 4 at 8 p.m. The performance, which features three performing ensembles from the Hugh Hodgson School of Music, is open free to the public.

“In the real world of jazz performance, the studio orchestra’s instrumentation is very common,” said D’Angelo, referring to the group’s mix of traditional jazz instruments and more “classical” sounds, such as a string section. “Countless movies, commercials and pop albums use ensembles like this.

“It’s exciting to see a new group like this come to life on stage,” D’Angelo also said. “It’s an ensemble that hasn’t been heard often in Ramsey Hall, and between that and the two bands, it should make for an exciting evening of new sounds.”

The Studio Orchestra will perform last on the program, following Jazz Ensembles I and II. The eclectically programmed evening features “a little bit of everything,” according to D’Angelo, from jazz standards like Chick Corea’s Spain to Latin numbers and more than a few surprises.

“We’re very excited to have a student vocalist, Kayla Berrie, join us for a performance of A Foggy Day (In London Town),” said D’Angelo. “In addition to playing saxophone, she’s quite a talented singer as well.”

The concert will culminate in the performance of a contemporary 12-tone composition for studio orchestra by Roger Vogel, a professor emeritus of the music school.

The jazz program has a longstanding tradition of excellence at the Hodgson School, having been invited to perform in Switzerland’s Montreux and France’s Vienne jazz festivals as well as having shared the stage with Jamey Aebersold, Marcus Printup, Eric Reed, the Lincoln Center Jazz Orchestra and Wynton Marsalis.