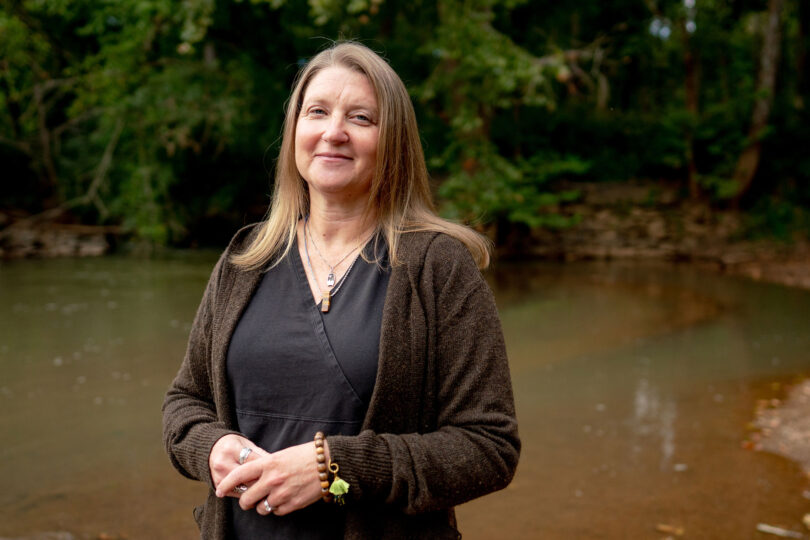 Researcher Jenna Jambeck, who holds an endowed professorship in the College of Engineering, was awarded a MacArthur Fellowship Wednesday. (John D. and Catherine T. MacArthur Foundation)

Known as ‘Genius Grants,’ the fellowship is the latest in the researcher’s extensive list of accolades

Jenna Jambeck, Georgia Athletic Association Distinguished Professor of Environmental Engineering at the University of Georgia, was named a 2022 MacArthur Fellow Wednesday for her work investigating the scale of plastic pollution and galvanizing efforts to address plastic waste.

Commonly known as “Genius Grants,” the fellowship presented by the John D. and Catherine T. MacArthur Foundation is among the most prestigious in the country. It is awarded to individuals who have shown extraordinary originality and dedication in their creative pursuits for the benefit of society. Fellows are nominated by a select pool of experts and leaders in the arts, sciences, humanities and more areas.

“The University of Georgia is incredibly proud of Dr. Jambeck for this exceptional achievement,” said UGA President Jere W. Morehead. “Her groundbreaking research exemplifies UGA’s land-grant mission to share knowledge generated through innovative scholarship and to leverage this knowledge to advance communities and the broader world. Our entire university congratulates Jenna on this significant honor.” 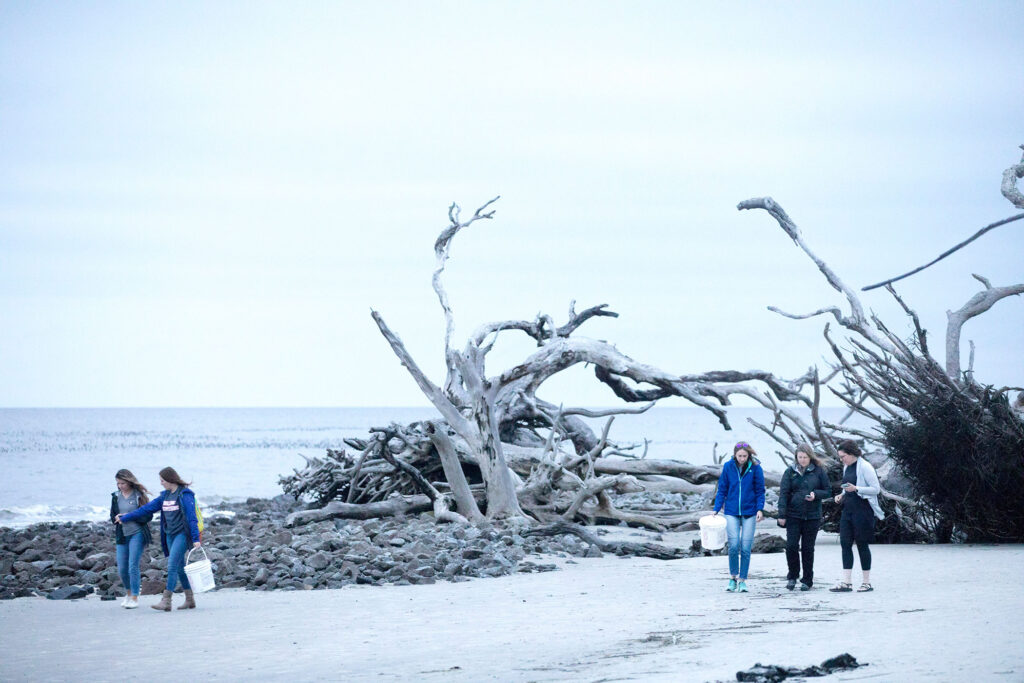 Jenna Jambeck and her research team look for litter debris on Jekyll Island’s Driftwood Beach. Jambeck and team developed the Marine Debris Tracker app and work with volunteers and communities around the world for data collection. (Photo by Dorothy Kozlowski/UGA)

Jambeck’s seminal 2015 study published in Science provided the first estimate of the amount of plastic waste entering the ocean each year: a staggering 8 million metric tons. In a follow-up study, Jambeck and her team discovered that humans had generated 8.3 billion metric tons of plastic since the large-scale production of synthetic materials began in the early 1950s. Of that waste, the researchers found 79% wound up in landfills or in the environment.

“The MacArthur fellowship is one of the highest honors a scholar can receive, and Jenna’s selection reflects her extraordinary creativity and commitment to interdisciplinary research that addresses one of the world’s most urgent and complex challenges,” said S. Jack Hu, the university’s senior vice president for academic affairs and provost. “I join the entire UGA family in congratulating Jenna on this recognition.”

In 2018, a finding from Jambeck’s research was named the International Statistic of the Year by the Royal Statistical Society. In that study, Jambeck and her colleagues found that more than 90% of plastic has never been recycled. The statistic lent a sense of scale to the problem of global plastic pollution.

I think my creativity has served as a source of strength and perseverance throughout my career.”  —Jenna Jambeck, College of Engineering

Jambeck also co-developed the Marine Debris Tracker mobile app with fellow UGA engineering professor Kyle Johnsen. The mobile app, created in partnership with the National Oceanic and Atmospheric Administration (NOAA), provides a platform for community members to log the types and quantities of plastic debris in their communities to help inform research efforts.

“To have my work spontaneously recognized by my peers is incredibly meaningful, and the fact that this fellowship recognizes creativity is one of the best parts,” Jambeck said. “I think my creativity has served as a source of strength and perseverance throughout my career.

“I hope that I can continue to create and communicate science and stories so that community members and decision-makers have the information they need about plastic pollution to feel like they can make the best decisions for them in their context.”

Jambeck advocates for change in plastic production on an international scale

Jambeck has focused much of her recent work on creating standardized methods for characterizing the processes and socioeconomic factors driving plastic waste leakage into the environment.

In 2019, she co-led an interdisciplinary team that gathered the first empirical baseline data on plastic pollution along 1,600 miles of the Ganges River system. She and her team also conducted interviews and surveys with more than 1,400 people to understand plastic use, waste collection methods and the impact of plastic waste on riverside communities. Jambeck undertook a similar project along the Mississippi River in 2021.

In 2020, Jambeck collaborated on a publication in Science Advances demonstrating that the U.S. generated the largest amount of plastic waste of any country in the world, some of it littered, illegally dumped in the states or inadequately managed in countries that imported materials collected in the U.S. for recycling. She was then invited to serve on a consensus study committee of the National Academies of Sciences, Engineering and Medicine to document U.S. contributions to global ocean plastic waste and has been subsequently appointed to the inaugural board of the NOAA Marine Debris Foundation.

This award is a testament to Jenna’s national and international leadership in her field and the positive impact that her work is having on communities across the world.” —Donald Leo, Dean of the College of Engineering

She and her colleagues developed the Circularity Assessment Protocol, a cost-effective toolkit for assessing materials management systems at the community level, to help people understand how plastic is used and flows through their communities through waste management and leakage into the environment. The system has helped community members in more than 30 cities around the world work with plastic manufacturers and people whose livelihoods depend on waste management to implement solutions to reduce plastic waste.

“This award is a testament to Jenna’s national and international leadership in her field and the positive impact that her work is having on communities across the world,” said Donald Leo, dean of the College of Engineering. “She is very deserving of this honor.”

Jambeck joined the UGA College of Engineering in 2009 and is affiliated with the college’s School of Environmental, Civil, Agricultural and Mechanical Engineering. She co-founded the UGA New Materials Institute and leads its Center for Circular Materials Management.

In 2003, the MacArthur fellowship was awarded to Eve Trout Powell, then an associate professor of history at UGA. Two UGA alumni have also won the award: Rhodes Scholar Beth Shapiro, a 1999 graduate of the university, in 2009 and A.E. Stallings, a 1990 graduate, in 2011.

More information on the John D. and Catherine T. MacArthur Foundation and the MacArthur fellowship and this year’s recipients can be found here.