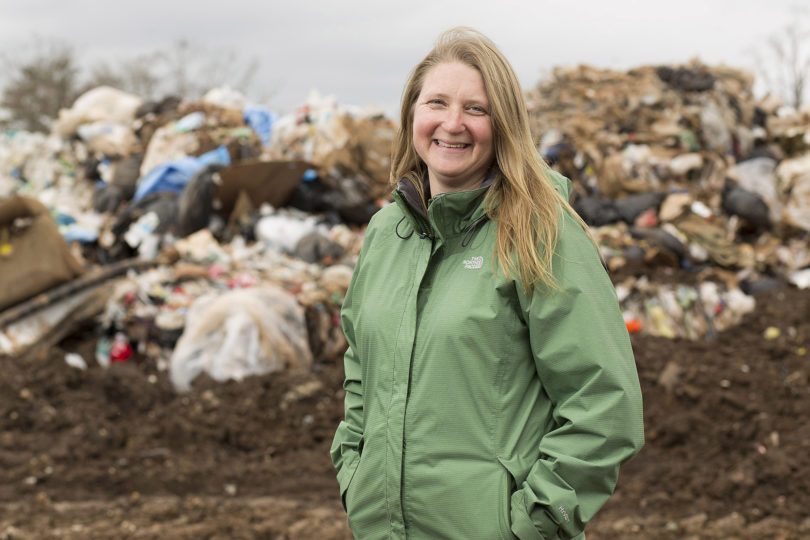 Jenna Jambeck, internationally recognized for her work to reduce plastic waste entering the ocean, has been named the Georgia Athletic Association Distinguished Professor in Environmental Engineering.

A member of the University of Georgia faculty since 2009, Jambeck conducts research and teaches environmental engineering with a focus on solid waste management and marine debris. As associate director of UGA’s New Materials Institute and director of the Center for Circular Materials Management, Jambeck is shifting the paradigm of waste management to proactive materials management. This means thinking about how to create less waste and managing materials before any “waste” is produced.

“Although this global issue takes me to far corners of the planet, my home is at UGA working on campus with many students and collaborators across disciplines,” said Jambeck. “I am so grateful to the Georgia Athletic Association for this honor and the professorship helps to continue our work to protect our environment and ocean, both locally and around the world.”

She led a landmark study, published in Science in 2015, that estimated 8 million metric tons of plastic enters the world’s ocean every year. A follow-up study published two years later revealed 90.5 percent of plastic has never been recycled. Prior to Jambeck’s research, it was unclear how much plastic was ending up in landfills or, even more problematic, in gutters and the ocean around the world.

“Jenna’s work to bring attention to and to find solutions for one of the world’s greatest challenges is truly inspirational,” said Donald Leo, dean of the UGA College of Engineering. “In addition to being a world-class researcher, she is an amazing teacher and mentor to our undergraduate and graduate students. I’d like to thank the Georgia Athletic Association for recognizing Jenna’s impact on our college and our planet.”

Based on her pioneering research, Jambeck was named a National Geographic Fellow in 2018. She served as co-lead of an international, female-led National Geographic Expedition team in 2019 that studied plastic pollution in one of the world’s most iconic waterways ­– the Ganges River. The research team included two of Jambeck’s graduate students.

Along with fellow College of Engineering faculty member Kyle Johnsen, she is co-creator of the Marine Debris Tracker mobile app, now powered by Morgan Stanley. The open-data citizen-science tool allows users to track plastic and other pollution using their smartphones. To date, Debris Tracker users have logged more than 2 million items around the world. The data gathered by the app helps scientists to create a more comprehensive picture of marine debris and plastic pollution, while informing and empowering community decision-making.

Jambeck conducts public environmental diplomacy for the U.S. State Department’s International Informational Speakers Program, which has sent her to 14 countries around the world to discuss and collaborate on addressing plastic pollution, including Philippines, Indonesia, South Africa, Japan, China, India and South Korea. She has testified twice on this issue before the U.S. Congress.

Jambeck received her doctorate, master’s and bachelor’s degrees in environmental engineering sciences from the University of Florida.