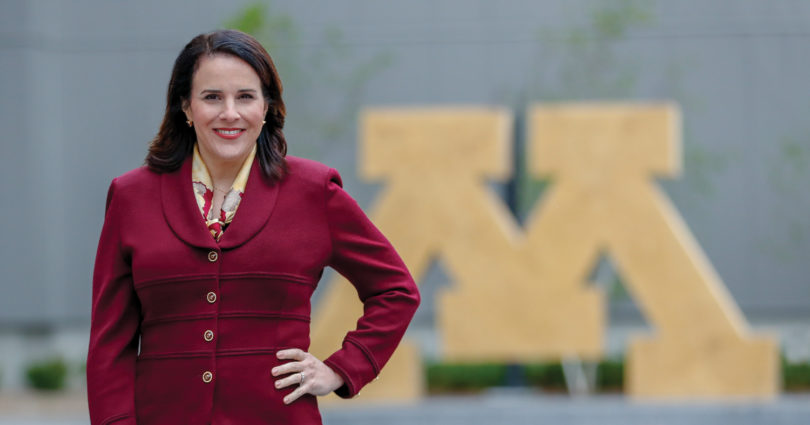 Joan T.A. Gabel JD '93 is the University of Minnesota's 17th president and the first woman to hold that position. (Photo by Eric Miller/Special)

In July, Joan T.A. Gabel JD ’93 became the University of Minnesota’s 17th president and the first woman to hold that position.

Being first so often has led to a lot of “what’s it like?” questions.

“I don’t know how to answer that question because I’ve never not been a woman,” she said to laughs at a Women in Business luncheon in Minneapolis over the summer.

But before reaching the highest ranks of academia, Gabel was an attorney. The Atlanta native trained at UGA’s School of Law, and she has credited that legal education for sharpening her skills to think, solve problems, and communicate—skills that come in handy in any job but particularly in higher education administration.

As a UGA student, she was an active member of the law school’s Moot Court program, which simulates appellate court proceedings, and she was a protégé of Jere W. Morehead JD ’80, long before he became UGA’s 22nd president.

“He was and is a tremendous teacher,” Gabel says. “He taught me how to communicate, how to leverage my strengths, and how to work in a team.”

Gabel took those lessons to heart. After working as an attorney, she joined the faculty at Georgia State University and later Florida State University, where her academic interests included legal and ethical issues in businesses. And she served as editor-in-chief of the American Business Law Journal.

Now, Gabel presides over five University of Minnesota system campuses and approximately 67,000 students and 27,000 faculty and staff. She has made improving campus climate, as well as strengthening research, education, and service to her new state, her priorities while in office.

“I’m very honored to be the 17th president of the University of Minnesota,” says Gabel, “and I’m very grateful to the University of Georgia for the education and values that gave me the competencies for such a fulfilling personal and professional journey.”