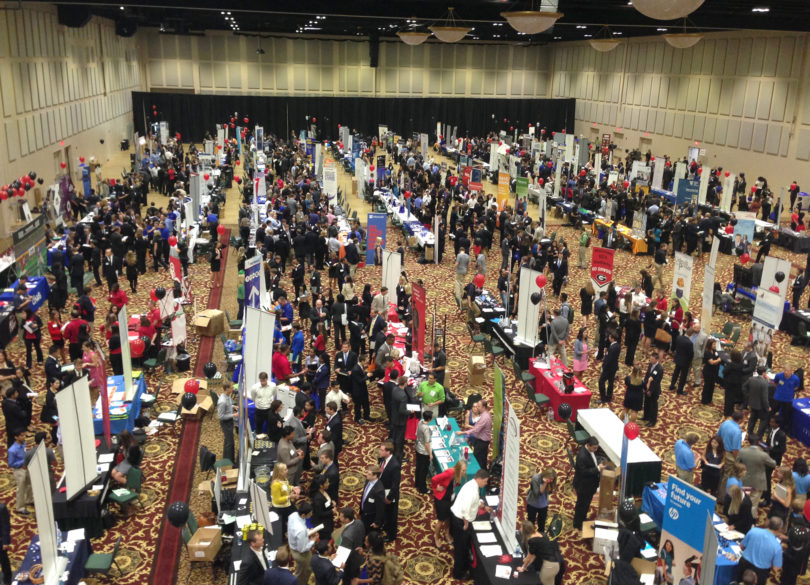 Athens, Ga. – The University of Georgia’s Class of 2015 will enter the best job market for new college graduates since the Great Recession.

Nationally, employers plan to hire 8.3 percent more new college graduates in 2015 in the U.S. than they did the previous year, according to the National Association of Colleges and Employers. There are signs on UGA’s campus that graduates are poised to benefit from a friendlier job market.

“Things are looking good,” said Scott Williams, executive director of the UGA Career Center. “The job market is better, and hiring is up.”

1. Number of employers at the fall job fair has nearly doubled since the recession

Annually, UGA Career Center helps host over a dozen career fairs, including some in coordination with the university’s schools and colleges.

“We have a large number of Fortune 500 companies representing a wide variety of career areas attending our fairs,” Williams said. The fairs have been strong with employers from Georgia.

There are more than 800 employers on campus each year to recruit UGA students for internships and full-time jobs.

2. There is an upward trend of UGA graduates getting full-time jobs

In addition to the national hiring trends, the job market has steadily improved for UGA graduates. In 2010, the Career Center reported that 52 percent of the graduating class were employed and about 28 percent were enrolling in graduate school. In 2014, that percentage was up to 63 percent employed; 15 percent had enrolled in graduate school.

Data on the class of 2015 won’t be released until spring 2016, but career counselors say this year seems to be trending ahead of last year.

3. Recruiters are posting thousands of opportunities on UGA job sites

From the fall to the spring, a total of 5,410 internships and full-time jobs were posted on http://www.hireUGA.com, where employers post job and internship opportunities.

Currently on DAWGlink, the job search site for UGA students and alumni, there are 1,300 entries. Michelle Carter, a career consultant for the Terry College of Business, said that’s a high number, especially this late in the spring recruiting season. Typically, employers are most actively recruiting students and future graduates between January and spring break in March.

Counselors say more students appear to be getting multiple job offers this year compared to recent years. This was not the case a few years back, said Laura Garcia, career consultant for the Terry College.

“Now we’re having tons of students emailing us saying, ‘I have a job offer, but I still have three outstanding interviews. What do I do?'” Garcia said.

5. The Career Center is reaching thousands of students

The Career Center reached more than 10,000 unique undergraduate and graduate students last year, with more than 40,000 total contacts with students through career counseling, outreach programs and events such as career fairs.

The more contact students have with the Career Center to polish resumes, hone interview skills or talk about job search strategies, the more prepared they will be to get a job, Williams said.

Even with a strong job market, Williams said, students still have to work to make themselves hirable, and that’s where the UGA Career Center can help. Williams often tells students that getting that first entry-level job is like getting in shape.

“You don’t go to the gym, snap your fingers and automatically get fit,” Williams said. “You have to exercise when you come to the Career Center. I think it’s extremely important for students to meet with their career consultants to have their resume critiqued, participate in a mock interview, and attend our career workshops, career fairs and on-campus interview program. The more effort you put into it, the more likely your results are going to be positive on the backside.”